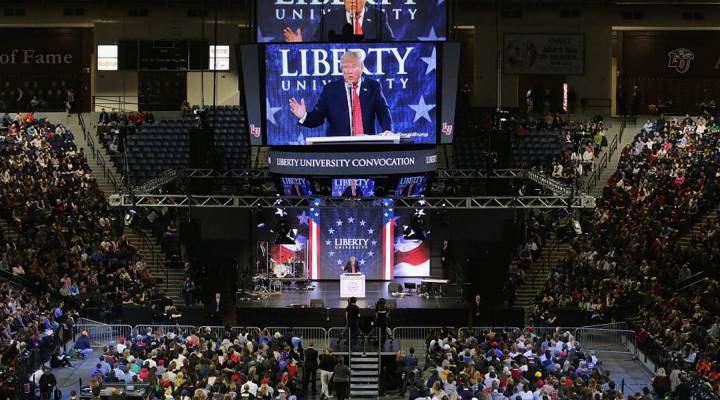 When you hear the phrase “online universities,” mostly it’s for-profit schools like the University of Phoenix and DeVry that come to mind. It’s a fact, though, one of the biggest online universities in the country isn’t for-profit, but rather nonprofit.

Liberty University is a nonprofit Christian school in Lynchburg, Virginia, and is perhaps best-known for its founder, Jerry Falwell. But more recently, Falwell’s son, Jerry Falwell Jr., has taken over the school and turned it into an incredibly efficient moneymaker. The method? A robust online degree program not so different from that at the University of Phoenix or DeVry. Alec MacGillis, from ProPublica, investigated the business model behind Liberty University in partnership with the New York Times in his piece, “Billion-Dollar Blessings.”

Marketplace host Kai Ryssdal spoke with MacGillis about his reporting. The following is an edited transcript of their interview. Ryssdal started out by asking MacGillis how a small and not-so-well run school became the enterprise that it is today.

Alec MacGillis: The university is now extraordinarily successful. It nets more than $200 million a year, which makes it one of the most successful nonprofits in the country. One of the most profitable nonprofits, you could say. And it does this really through its online degree program. It’s just a remarkably lucrative enterprise.

Kai Ryssdal: You spoke with Jerry Falwell Jr. about this, and he said in essence, “Yup, this is what we’re doing, we’re driving the prominence of the actual residential college and its cultural implications with this online revenue.”

MacGillis: Indeed, he’s quite proud of their success, and spoke about it quite freely. As he sees it, they’ve just become an American success story, and they’re able to sustain the traditional college, the physical college, they’ve been able to do this by having found this very lucrative vein in American higher education, namely online classes. And he’s quite proud of that.

Ryssdal: And they are ambitious in their pursuit of that. There’s a great little anecdote of, in fact, it is a call center. And Jerry Falwell Jr. calls it that. A call center that Liberty University Online set up, like, in the local mall after a Sear’s store went away. Explain how that works and why that’s relevant.

MacGillis: Well, that’s the heart of the business right there. They have this call center with hundreds of recruiters, and they are making calls nonstop from 8 in the morning till 8 at night, under incredible pressure to get results. They’re expected to sign up eight people per day. Eight new students per day per recruiter. It really is kind of a boiler-room-type atmosphere that is the engine of this whole operation.

Ryssdal: And they do it with amazing alacrity, right? I mean, the people searching online for, you know, Christian education, click on a link and then Google sends it to the call center, and, you know, a minute later, literally a minute later, that person is getting a call.

Ryssdal: A key thing here is the nonprofit status of Liberty University, right, and how that lets the school, and then its online arm, not be scrutinized as for-profit colleges might be.

MacGillis: That really is the key distinction. The Obama administration clamped down quite a bit on for-profit colleges, which were getting more and more federal aid, taxpayer aid, to give to students, many of whom were not getting very good educational results. But Liberty, by virtue of being a nonprofit, was exempt from a lot of those new restrictions. It not only was exempt from those restrictions, but it saw a lot of its competitors in this online realm really suffering under those restrictions while it was left pretty much unscathed.

Ryssdal: The actual physical campus has become a center of, and a highlight of, Republican political campaigns. Candidates go there, they make speeches. The first commencement address President Trump gave after he came into office was at Liberty University. Just to be clear, it’s the online part of this school that is driving that physical embodiment of what Jerry Falwell Jr. now runs.

MacGillis: Exactly. It is this very visible embodiment of the power of the religious right. But in fact, what my reporting found was that it’s all really being funded by this completely different realm, these students out around the country, many of them quite desperate to sort of better their economic prospects, who are paying for these online courses — courses that are really often quite thin in what they’re delivering. The reason why liberty is so successful, why it’s netting so much profit on these courses, is that they’re spending incredibly little on the actual instruction for them.