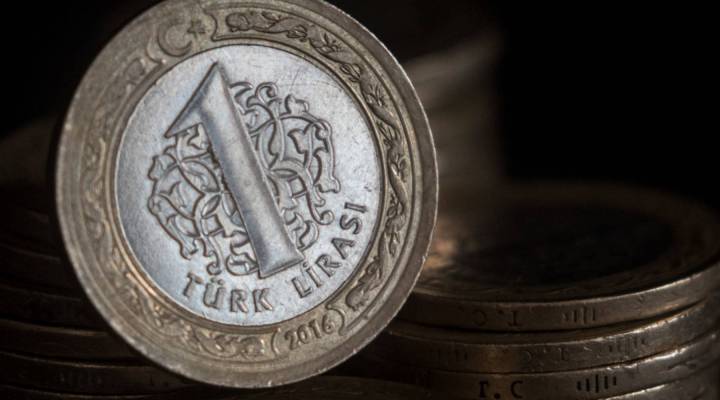 Turkey’s red-hot economic growth has come with a painful side effect: booming inflation and a tumbling currency. At 7.4 percent, the country was the fastest growing G-20 economy last year. The International Monetary Fund projects the nation will register a more than 4 percent growth rate in 2018.

At the same time, new figures released Thursday show consumer prices rose more than expected and hit a December high last month, pushing the overall level of yearly inflation to 10.85 percent. For comparison, the average rate of inflation in emerging and developing economies is 4.6 percent, according to the IMF.

As investors worry about what higher inflation means for the country’s central bank — which only just raised rates for the first time in a year last week in an attempt to balance the problem — they’re putting pressure on the lira, the country’s currency. It hit a fresh record low against the U.S. dollar, and so far this year, is down almost 10 percent.

But, how did Turkey get into this position in the first place? And isn’t economic growth supposed to be a good thing?

Easy money policies — like the ones in the United States enacted in the aftermath of the 2008 financial crisis — have made borrowing money cheap. It’s been advantageous not just for Americans, but also foreign investors and companies in overseas and developing markets like Turkey. That’s pushed debt levels higher than they likely otherwise would have been, and makes repaying those debts increasingly more expensive as rates rise in the U.S. and parts of Europe.

But what’s helped push Turkey’s growth rate higher has been a combination of low interest rates and massive government stimulus. After an attempted coup to overthrow President Recep Tayyip Erdoğan in 2016, which resulted in an economic downturn, the government began spending more on defense and other projects. The 2018 budget includes even more increased spending alongside a projection for the fiscal deficit to increase to $17.28 billion. In 2016, the budget deficit was a fraction of that.

As growth has accelerated, economists question whether the Central Bank of the Republic of Turkey’s rate rise last month will be enough to slow inflation. Piotr Matys, emerging markets foreign exchange strategist at Rabobank, says it’s been difficult for the central bank to act. Each time it hinted a rate rise was coming, the government would hit back.

As the economy reaches a fever pitch, things might be about to cool off.

In a bid to secure power, Erdoğan last month moved planned elections forward by more than a year. Voters will now head to the polls in a general election next month, which Matys says gives the central bank more room to pull the reigns back on the economy since there won’t be time for higher rates to disrupt economic activity in a negative way for the ruling party.

“If anything, I would argue a hike is positive because it should stabilize the lira and prevent sentiment among consumers and corporates from deteriorating. There’s a strong correlation between the value of the lira and sentiment of consumers and companies. And Turkish officials will benefit from that. If you allow a currency to weaken even further, that could lead to potential unpredictable outcome for the elections,” Matys said.