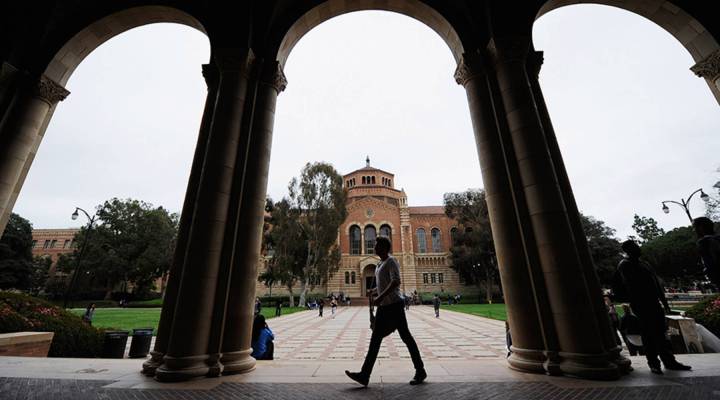 Should universities worry about spying? That’s what some people in the White House may think. The Trump administration is reportedly thinking about measures to prevent Chinese citizens from conducting sensitive research at American universities. The worry is that these researchers might be taking home more than souvenirs —they might be traveling with secrets. Marketplace’s Amy Scott spoke with Daniel Golden, author of “Spy Schools,” about the front lines of academic espionage. The following is an edited transcript of their conversation.

Amy Scott: In your book, you have this juicy story of a Chinese researcher at Duke who was working on some sort of invisibility cloak for fighter jets. Granted this is just one student out of thousands, but tell us what happened there.

Daniel Golden: Yes. The idea of the research was to try and hide military weaponry. And so far, they did succeed in building a cloak. But it only makes objects invisible to microwaves, not to the human eye. And this researcher was working at Duke University and then graduated and went back to China and worked on similar research there.

Scott: What is the concern with what happened?

Golden: He exploited a number of gray areas. For example, he arranged for collaborators back in China to come to Duke and photograph the equipment that was being used there. He manipulated the professor into agreeing to share research in China. And a lot of these activities didn’t exactly break the rules because there weren’t a lot of rules that pertain, but you put them all together and they look highly concerning.

Scott: Now the Trump administration wants to restrict Chinese citizens from participating in certain kinds of sensitive research. Has the U.S. done anything like this before?

Golden: You know, we’re kind of in a new era because of the globalization of higher education. There’s more than a million international students at U.S. universities now, and many thousands of foreign faculty and researchers. And I think there might have been concern back in the day about individual researchers, say in the Soviet era, but the numbers were so few that it was manageable. Now education is so globalized, and that brings many benefits, but it also brings concerns about this kind of poaching of intellectual property.

Scott: I wonder if there could be legal challenges though if the administration blocks access to work on the sole basis of nationality, if it singles out Chinese researchers?

Golden: Yeah, I think it would be concerning on a number of levels. While this is a significant issue, you have to see it in the broader context, which is that there is this massive Chinese brain drain essentially going over to the United States, and we benefit from that. But there is this unfortunate side effect of the loss of intellectual property. You know, I think that there’s a number of things universities could do that would at least make it a little harder to steal their research.

Scott: Yeah, what else could they do to protect intellectual property and military secrets without an outright ban?

Golden: Well, for example, they could have courses on intellectual property outside law schools. American science students, and sometimes professors, don’t really know enough about how to protect their property or what a trade secret is. They also could spell out in more detail the agreements they make with foreign researchers. Academia operates often on a kind of old-fashioned honor system, a handshake agreement. If they were to draw up a more extensive agreement saying who has access to what data and who can do what, that would come in handy. At least you’d know what the rules were. And so you would be able to tell when somebody was crossing them.