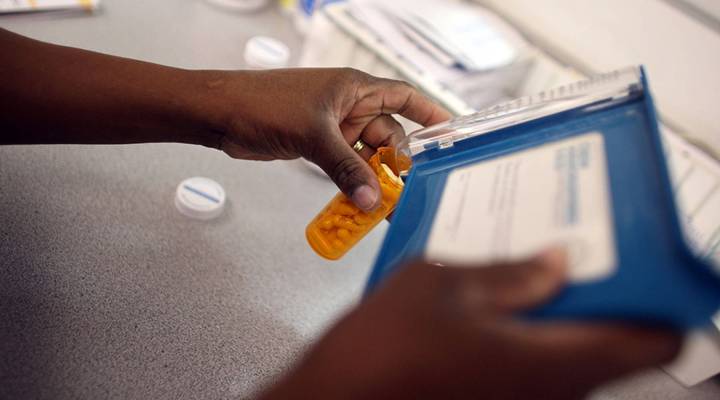 Jackie Trap, 53, has a good reason to be worried about drug prices.

“I have been diagnosed with multiple myeloma, which is an incurable form of blood cancer,” she said.

The former real estate agent who lives outside Milwaukee takes the high-priced drug Revlimid. Under the Medicare Part D program, patients like Trap are on the hook for $5,000 in prescription drug copays each year. After that, they must cover 5 percent of a drug’s list price. For Trap, that’s about $1,000 a month.

But she expects the price will change. “I have no way to plan for that,” Trap said. “The one thing I do know,” she said, “I can plan on is my disease will relapse and that relapse will involve more drugs. And those drugs will be more expensive. That’s my future.”

In his 2019 budget proposal, President Donald Trump suggested eliminating any out-of-pocket costs after $5,000 — providing some relief to seniors and people with disabilities.

The president is expected to soon address the problem of high-and-rising prescription drug prices. Last month the administration delayed a major policy speech.

The number of people who hit their annual $5,000 limit has doubled to one million since 2007, as prices for drugs have soared.

A cap would limit what people like Trap pay, but taxpayers would pick up the difference. Fundamentally, this proposal does not lower the price of drugs, but does protect one group of consumers.

Vanderbilt professor Stacie Dusetzina said capping out-of-pocket costs for patients like Trap can backfire, because those stories of patients who are forced to pay exorbitant drug prices to stay alive are politically powerful.

“When you think about those stories that puts the drug pricing issue in the face of policymakers, if you cap out-of-pocket spending many of those stories disappear,” she said.

One way to protect seniors and keep pressure on the pharmaceutical companies, Dusetzina said, is to make insurers pay more. Right now, Medicare pays the lion’s share of a drug’s cost after  a person reaches his or her $5,000 limit. In his budget, President Trump suggested insurance companies pick up a much greater share of the cost.

Dr. Mark McClellan at Duke University, a former administrator of the Centers for Medicare and Medicaid Services, said that sort of financial incentive would push insurers to behave differently.

“The idea is that would give the plans stronger incentive to negotiate down the cost of these expensive drugs and help keep the program costs down,” he said.

This plan could lead to fiercer price negotiations. Several health economists and policy experts argue until Washington forces drug companies to lower their overall prices, an out-of-pocket Medicare cap is just dabbling at the edges.

But what may seem modest to some is critical to Trap and other Americans with serious health conditions if we keep the status quo.

“I’m somebody who has been self-sufficient. I’ve paid a lot of taxes over my lifetime,” Trap said. “And now you’re going to take somebody like me and just completely bankrupt me.”