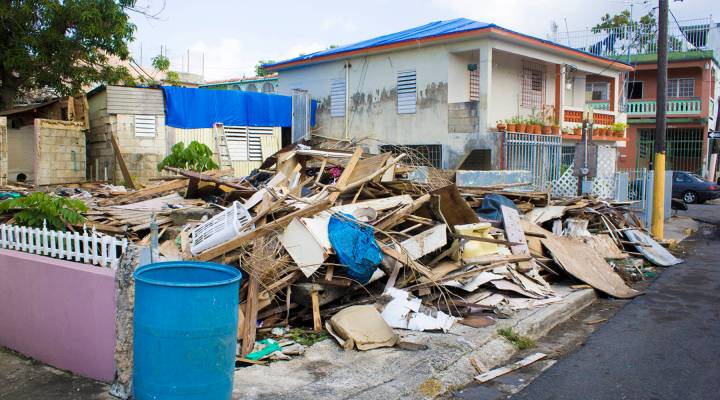 Luis “Jujo” Malave’s house was never very big. But to him those plywood walls were home. Then Hurricane Maria came.

Today, to get to what’s left of the house, you need to climb over it’s former self — a four foot high pile of rotting plywood and snapped tables.

“I started living here in 2002,” Malave said, in Spanish, through an interpreter. “It was my house but I wasn’t the owner there.”

Like thousands across Puerto Rico, Malave lives in an informal housing situation. In San Juan’s barrio Israel, he has an informal arrangement to stay on the land. But no lease, no insurance — and no Federal Emergency Management Agency funding for repairs.

There’s no official count of how many people live in makeshift, informal housing but the Puerto Rico Builders Association estimates over half of the housing on the island is considered informal. These can be houses built without the proper permits, houses where no one has a deed or houses in a designated flood zone. And for the people living in them like Malave, without the proper papers it’s hard to get relief money for rebuilding from FEMA.

Luis Malave inside of what’s left of his home. It rained nearly 12 hours earlier and wooden beams still drip.

Malave sleeps in what’s still standing: a single room with a blue tarp for a roof and a piece of tin for a door. It rained nearly 12 hours earlier, but inside, under the tarp a bucket still catches drips from a wooden beam.

“You have to prove ownership to be able to get the FEMA help,” said Michelle Sugden-Castillo. She’s a consultant with various housing nonprofits in Puerto Rico.

FEMA allows people with no title or lease to submit a written statement about their situation. A FEMA spokesperson said if someone can provide “an explanation of the circumstances that prevent standard ownership verification,” they’ll consider them for their disaster assistance program.

FEMA has gotten over 1.1 million disaster assistance applications from people living in all situations. But only 40 percent – two of every five – get approved. FEMA says that can be because of multiple applications from the same household and people not meeting certain homeowner standards.

But even when assistance comes through, for some it’s not enough.

Orlando Ortiz has lived in the San Juan neighborhood Villa Palmeras for nearly 50 years. His mother bought the house when he was 10 years old. Ortiz fully paid off the mortgage, but he couldn’t afford insurance. And then Hurricane Maria destroyed the roof on the only home he’s really known.

Orlando Ortiz lost his roof during during Hurricane Maria and has been using a blue tarp ever since. During the day, his house basks in a hot blue glow.

So for months, he’s lived with a blue tarp for a roof instead. Ortiz now knows all about life under a tarp. He knows sweltering sun that flows through the tarp, basking the interior in a blue, stifling heat.

“In the day, you can’t be in here because it’s an oven,” Ortiz said, in Spanish.

He knows the bats and pigeons that get in at night. Yet, he knows he’s not the 75-year-old down the street living in his kitchen on a mattress, rebuilding his house by hand.

But what Ortiz doesn’t know is that he got more disaster assistance from FEMA than most to fix his place.