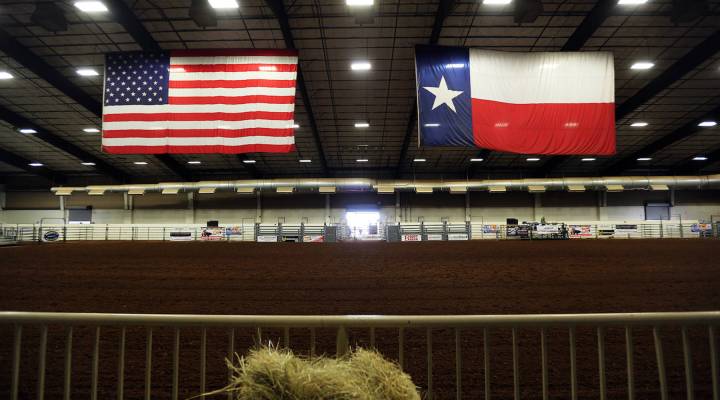 Heading west on I-20 from the Midland, Texas, airport, the highway is littered with 18-wheelers and pickup trucks. The horizon is full of oil derricks and pump jacks, just like in the movies. About half an hour down, right on the service road, is what looks like a high-end recreational vehicle park with mobile housing units lined up one after the other. It’s called Iron Horse Ranch Lodge, and it’s what local people refer to as a “man camp.”

Big oil companies like Halliburton and Exxon Mobil get their employees rooms here. Most firms foot the bill while the employee is working in the oil patch.

Mike Milner just started with a new company and is currently staying at the Iron Horse Ranch Lodge. He’s on a 10-days-on, five-days-off schedule.

“My old lady is in Houston, my two kids are in Houston,” he explained outside a sports bar in downtown Midland. “I’m 10 days gone, five days home. It’s tough because my kids are small and they want to see me. My daughter will be four next month and my boy just turned five.”

If he drives home to Houston, it takes eight and a half hours. Milner said the man camp feels like a college dorm room. It’s not ideal, but for now it’s the best option he’s got.

“The housing market out here sucks,” he said. “Apartments are a three- to five-month waiting lists.”

Milner said he wants to drive his family’s RV to Midland so his wife and kids can stay in it when he’s on the rig, but right now, that’s not economically feasible.

At least when Milner’s not on the job, he can return home to Houston. Other roughnecks come to town from all around the country and live in the man camps, even when they’re not working.

Jim Stephens came to Midland from Pennsylvania because he couldn’t get a job working on an oil rig there. He said the labor market here in the Permian Basin is so tight, entry-level gigs can pay $60,000 a year, even with no experience. He said his company’s housing him in a man camp, too.

“They provide your own room, which is nice, other than the other guys sharing — four dudes in a room,” Stephens said. “But you have to pay $30 a day. You have 30 days of that, and then you are kicked out of the man camp.”

Stephens said he’s thinking about snagging an Airbnb place after his 30 days at Iron Horse Lodge. He might look for an apartment or a rental house, but he knows that’s a long shot, because even if he can afford to pay more than he wants, there’s no supply.

Longtime Midland resident Dustin Freeman struck lucky. Years ago, with savings from his restaurant job, he bought a 3,000-square-foot home. His realtor friend told him he could rent it out right now for $4,500 a month.

“Rental prices are crazy expensive. I mean, one-bedroom apartment for $1,400 a month. That’s like New York City prices,” he said. “But people charge so much because they know they could get it. You know, it’s supply and demand.”

Freeman said whenever oil prices spike and production ramps up, developers rush to build apartments, condos and even hotels. But building in a boom carries its own risk. Freeman recalls when oil was $100 a barrel back in early 2014 and building took off, but then prices fell again and people left town, leaving accommodations empty.

“I think we had two or three apartment buildings that just didn’t get finished for a while because then everybody was gone,” he said. “There was nobody to live in them.”

With U.S oil prices now nudging $70 a barrel, developers in the Permian Basin are trying to build homes and housing units as fast as they can.

Myra McKinley, a listing agent in Midland with Keller Williams, said it’s a great time to be in realty, except that you have to disappoint so many people.

“The builders are opening up new phases in some of the subdivisions, so there’s a lot more building permits that are going out, but there’s no way to catch up,” she explained.

She and her colleague, Lauren Lambdin, recently showed a house to a couple in Midland’s “museum district.”

Lambdin said this couple likes the house but they’re offering more than the listing price, so they have to wait to see if the bank is willing to lend them the money. She’s anxious to seal the deal.

“The moment that a move-in-ready house goes on the market, it’s gone,” she said.

The U.S. Bureau of Labor Statistics said Midland has the fifth-lowest unemployment rate in the nation. People here often say that if you want a job and are capable of doing the work, you can get one. But putting a roof over your head is something else altogether.