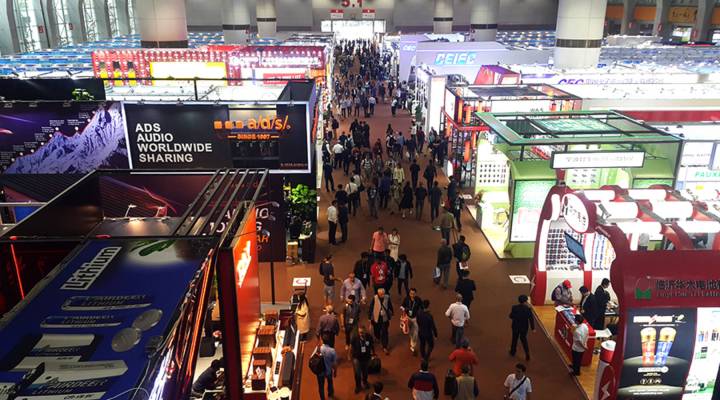 COPY
China manufacturers at the Canton Fair are nervous about an escalation of U.S.-China trade friction. Jennifer Pak/Marketplace
Trade showdown

China manufacturers at the Canton Fair are nervous about an escalation of U.S.-China trade friction. Jennifer Pak/Marketplace
Listen Now

Brad Schulz from Scottsdale, Arizona, is scouting for items to sell on Amazon this Christmas. The hunt has taken him thousands of miles to Guangzhou city in southern China to one of the world’s biggest trade shows — the Canton Fair.

The event attracts some 25,000 companies, mainly Chinese, that set up booths to show off their latest products — from power tools and chemicals to car parts.

The current fair covers an area of some 12 million square feet — the equivalent of 68 Walmart Supercenters put together.

“China is a manufacturing powerhouse and has been for 40 to 50 years. You’re not going to change that overnight,” Schulz said.

The three-week event ends on May 5. Last year, the event drew 191,000 overseas buyers like Schulz.

After two hours at the Canton Fair, Schulz has seen a couple of items he wants but he is nervous about placing an order because the United States has threatened to impose tariffs on goods made in China.

“If we have a shipment on the way … and get hit with a 20 percent tariff or 30 percent tariff, that could make everything we do unprofitable,” Schulz said.

However, sellers from China try to sound as upbeat as the electronic music that blares from the booths selling speakers.

Skyworth is a company that manufactures TVs. Its televisions are among the targeted 1,300 types of goods imported from China that face a possible 25 percent tariff from the United States.

“The impact on us is minimal because our sales ratio in the U.S. market isn’t that high,” said a manager at Skyworth. He only wants to be identified as Mr. Liu rather than by his full name for fear of government retaliation. Trade is a sensitive topic right now.

Liu does his best to sound optimistic, but he also told Marketplace that Skyworth’s raw material costs are rising, its TVs are facing new tariffs in India and that the firm faces stiff competition within mainland China’s market.

Skyworth wanted to address these issues by expanding sales overseas, including the United States.

But after a 20-minute talk with Marketplace, Liu, admitted that the U.S.-China trade friction is worrying for the company.

“As an individual or a company, we do feel helpless,” Liu said.

He said Skyworth is considering building a factory in the United States that might help the firm avoid possible tariffs.

The United States argues that the tariffs are targeted at TV manufacturers like Skyworth because they benefit from China’s industrial policies, which give them an unfair advantage over American firms.

Many manufacturers here said they should get government help because China is still a developing economy.

For example, Skyworth’s Android TV is made in China, but the software is not.

“The TV sets we export to the U.S. have content made in America, such as the Google Play Store, YouTube and Netflix,” Liu said.

Other countries to which Skyworth sells Android TVs also download American apps and not Chinese ones.

Adding to the current trade tensions between the United States and China is the complaint from American companies that they were either forced to hand over their technology to access the Chinese market or had their trade secrets stolen.

Alex Zhang is with the Guangzhou city-based firm iNail, which produces machines that print designs on fingernails. He sympathizes with American firms and admits that Chinese competitors have copied their products before. His advice to the Americans?

“Invest more time and money in research and development to stay in the lead. Then it will be hard for others to surpass you.”

Not all the sellers at the Canton Fair will be liable for U.S. tariffs, but almost every manufacturer who spoke to Marketplace is worried about the impact of the U.S.-China trade tensions on the foreign exchange rate.

The U.S. dollar has been down 10 percent against the Chinese yuan since President Donald Trump took office. That has hurt firms like Sunrise Group, which exports 20 percent of its steel rims and wheels for transport trucks to the United States.

“The cost of each wheel we produce has increased a few dollars because of the exchange rate,” global sales manager Hebe Chen said. She is concerned that ongoing trade tensions could further weaken the U.S. dollar and increase business costs.

Sunrise’s steel products already face a 25 percent tariff from the United States, which came into effect in March.

China responded by slapping tariffs on $3 billion worth of U.S. goods, including pork, wine, fresh fruits and nuts, earlier this month.

The United States has threatened more tariffs on a potential list of 1,300 items from China worth $50 billion. Trump has said there could be another list of penalties worth $100 billion. China is promising to respond in kind. There are fears that this tit-for-tat action could lead to a trade war.

Not everyone expects to lose out.

Cyril Lionnet, who is at the Canton Fair looking for bathroom fixtures to sell in his native Australia, hopes U.S. tariffs push Chinese exporters to get rid of their products in markets outside the United States.

“Hopefully it’ll make the product [prices from China] come down a little bit,” he said.

Some manufacturers at the Canton Fair told Marketplace they feel the United States is using tariffs to stop China’s rise.

However, sales manager Lily Zhan said she isn’t interested in the politics behind the U.S.-China trade friction. She just wants the two nations to negotiate. Some of the towing supplies she sells for her company Runva could face tariffs.

“Maybe the U.S. list was issued initially without careful consideration, but there will be a few months for public consultation, so I am optimistic about the final results,” Zhan said.

She said if her company is hit by U.S. tariffs, she hopes the levies will be lower than the proposed 25 percent. If not, Zhan said, the cost will be passed down to consumers.

“Someone has to absorb the extra costs, and we as suppliers can’t afford to,” she said.

Some people at the fair expressed doubts that imposing tariffs would bring back manufacturing jobs to the United States.

“A lot of the things that are produced here, we just don’t have the knowledge or the intelligence of how to produce those in the United States today,” said Schulz, the man looking for items to sell on Amazon.

So far, the small consumer electronic items he sells online are not subject to potential U.S. tariffs. He is hopeful the two nations will find an appropriate solution because their two economies are so interdependent.

Shulz said the only reason retailers in America switched from “made in the USA” products to Chinese made ones is price.

“Until there is a key change in the United States where people are willing to pay considerably more for their products, I don’t see that changing anytime soon,” he said.

For now, he will continue to sell “made in China” items to Americans.