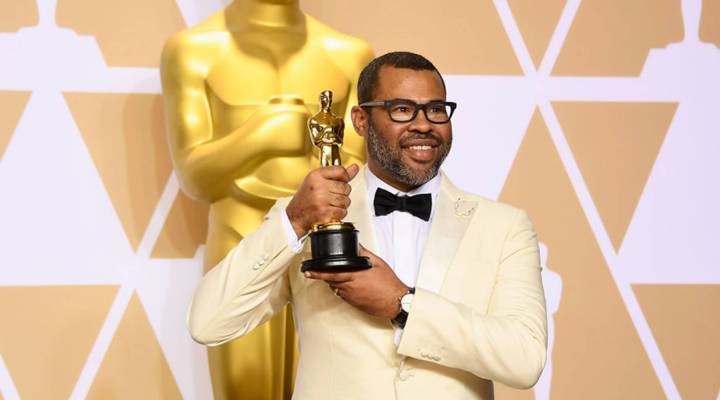 COPY
Writer Jordan Peele, winner of the Best Original Screenplay award for 'Get Out,' poses in the press room during the 90th Annual Academy Awards at Hollywood & Highland Center on March 4, 2018 in Hollywood, California.  Frazer Harrison/Getty Images

Writer Jordan Peele, winner of the Best Original Screenplay award for 'Get Out,' poses in the press room during the 90th Annual Academy Awards at Hollywood & Highland Center on March 4, 2018 in Hollywood, California.  Frazer Harrison/Getty Images
Listen Now

In Hollywood, horror pays. And the reason might have more to do with how cheap these films are to make relative to their production costs. Movies like John Krasinki’s “The Quiet Place” continue to sell tickets weeks after the premiere weekend. So far, “A Quiet Place” has made more than $130 million at the box office, and that’s on a $17 million production budget.

Sean Fennessey, editor-in-chief at The Ringer and host of the Big Picture podcast, wrote about the rise of the horror movie industry in Hollywood. Marketplace host Kai Ryssdal spoke with Fennessey about his reporting; the following is an edited transcript of their conversation.

Kai Ryssdal: Where do horror films stand in the pantheon of movies these days? Because you got your big blockbusters, and then you got these things that kind of come out of nowhere.

Ryssdal: How come? Why do we love them so much? Wait, let me just interrupt and say, I hate scary movies. I do. I don’t go see them. I don’t like being scared. I don’t enjoy them. I don’t understand why people go see them, but we’ll get to that in a minute. I think, I want the cards on the table.

Fennessey: That makes you rare among Americans. Horror movies, aside from the event movies you talked about, are the only movies that people consistently want to go see in theaters.

Ryssdal: I know! It kind of makes me crazy, but why do people like to go see them so much? Other than enjoying the scary part.

Fennessey: I think it’s because people still want to feel, and horror movies still make us feel things. And in groups, too, we’re not just stuck in a room on our phone wondering about our shopping list or what we have to do tomorrow. We have to be locked into the experience, feeling things as a group.

Ryssdal: And also, as you say in this piece, there are not sequels or prequels or origin stories, they’re not parts of big series, you know, all of those things, right? They’re sort of each, most of them anyway, elemental to themselves.

Fennessey: Yeah it’s true, they stand alone if they have to. And even the sequels, if you want to just walk into a sequel to a horror movie, you can basically get the gist. You don’t need to know what happened in the previous one — something bad happened.

Ryssdal: There’s a slasher, and something scary happened, and then next, right?

Ryssdal: I would say Hollywood probably loves them because they’re just cheap to make.

Fennessey: That’s exactly right. “Get Out” is a great example of that. “Get Out” cost less than $5 million. It made over $300 million worldwide.

Ryssdal: And with how many Oscar nominations, whatever.

Fennessey: Exactly. It is a huge cultural moment.

Ryssdal: Talk to me then, for a minute actually, about cheap movies. Jason Blum of Blumhouse who had a hand, I guess, in “Get Out,” as well.

Ryssdal: And also now with the one that’s out now, “Truth or Dare,” right?

Ryssdal: Talk to me about that.

Fennessey: He has a very clear strategy, which is he takes small bets on big ideas. And there are strong elevator pitches with first, second, third-time filmmakers. People who aren’t going to spend a lot of money, knows how to get teenagers in the movie theater, knows how to get adults like ourselves in the movie theater, and it’s just low-risk, high-reward. And he’s been able to do it 12, 14, 16, times.

Ryssdal: Yeah, a zillion times. And I should say, by the way, for those interested in more about Jason Blum, we had him on the show as part of a panel I did at a Vanity Fair thing about a year or so ago. Totally interesting dude. Totally interesting.

Ryssdal: Compare and contrast that though, the Blumhouse approach, with, I guess it’s Paramount with “A Quiet Place.”

Ryssdal: With a couple of stars, right?

Fennessey: John Krasinski, who directed the film and also the star of the film, his wife, Emily Blunt, also the star of the film. This is a little bit different from what we were talking about before, that low-risk thing. Although “A Quiet Place” relative to your, I don’t know, your Marvel’s Avengers, is still a very, very small bet for a major studio.

Fennessey: But, you know, it’s more of that mid-budget thing, and that also seems to have worked.

Ryssdal: And it’s also, they’re also really good ways for young directors to get in, right? I mean you look at like, Spielberg and some of the biggies, started doing, you know, low budget-ish horror movies.

Fennessey: Absoultely, and we just talked about Jordan Peele, and “Get Out,” and wh0 knows where his career is going. I suspect his next five films will not all be horror films.

Fennessey: I love them.

Fennessey: I live for it.

Ryssdal: So, the corollary there is, I don’t really want to feel, is that where we are?

Fennessey: Well…it depends on what you want to feel, what those feelings are.