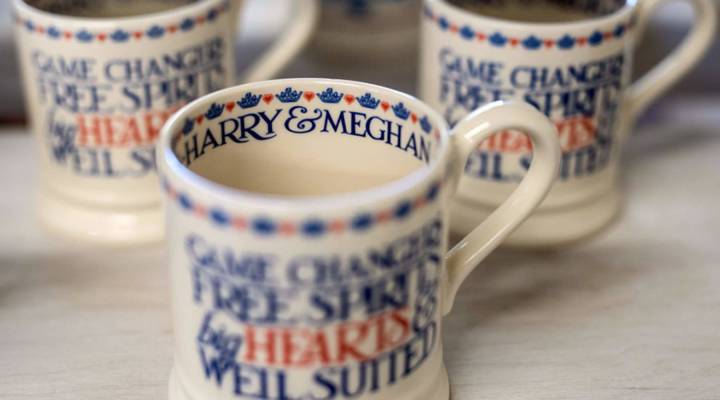 On May 19, Prince Harry and Meghan Markle will marry. The couple will wed in St. George’s Chapel in Windsor Castle — a royal residence in the small town of Windsor some 22 miles west of central London.

The bells of St. George’s will chime to mark the happy event, but the cash tills are already ringing.

Tourism is by far Windsor’s biggest industry. Thanks to the royals, 7 million visitors flock to the town every year, and an extra 100,000 are expected on the wedding day, boosting the local economy.

The deputy leader of the local council, Phillip Bicknell, anticipates that many free-spending Americans will be among the tourists.

Of course, another American divorcee — Wallis Simpson — stormed the ramparts of the British monarchy more than 80 years ago, but since her romance with King Edward VIII ended with his abdication, no one in Windsor wants to dwell on it today.

Anyway, they’re too busy making money. Every hotel and guest house within a 5-mile radius of the town center is fully booked for the wedding weekend, and many other tourist businesses are booming.

In the King and Queen Gift Shop at the foot of Windsor’s Castle Hill, Harry and Meghan memorabilia have been flying off the shelves. Tourists have been snapping up fridge magnets, T-shirts, tea towels and mugs bearing images of the happy couple and costing $18 or more. Margaret Tyler from London was in Windsor recently adding to her collection of royal souvenirs.

“I’ve already got about 10,000 at home. Everything you can imagine, from mugs and plaques and figurines, covering several generations of royals. I’ve got so much that there’s hardly any room to move around my house. I’ve got a sofa, a television and a little kitchen. I haven’t got room for anything else,” Tyler said. “Nevertheless, I’m still looking for more commemorative items. I love the royal family.”

The royal wedding has triggered an avalanche of royal tat, including some bizarre products like the Harry and Meghan breakfast cereal, and the aim is obvious: to make a quick buck.

But in tune with the socially aware image that the young couple has been energetically projecting, there’s been an effort to link this demand for souvenirs to a charitable cause. “For Richer, For Poorer” is the result. This is a new brand of souvenirs, launched by a group of design and marketing consultants, and aimed at raising funds for the homeless of Windsor. Giulia Watson of Revolt Communications leads the project.

“We decided to do this after a local councilor called for the homeless to be cleared off the streets of Windsor in time for the royal wedding,” Watson said. “He claimed there was a lot of aggressive begging that would put the royal borough in an unfavorable light.” Watson and her colleagues have produced seven different commemorative items ranging in price from $15 to $7,000 and hope to raise at least $200,000 to help the 30 or so rough sleepers in Windsor into decent accommodation.

”We’re saying to the visitors: Purchase this stuff because you want to commemorate the royal wedding, but do so knowing that you’re also helping some of the more vulnerable people within our society to lift themselves up and provide themselves with new opportunity,” Watson said.

Lucy Bryant’s foray into the Harry and Meghan souvenir market is rather less altruistic but it has caused quite a stir. Her commemorative plate carries a picture of Markle alongside a well-known red-haired gentleman. But it is not Prince Harry. It’s the pop star Ed Sheeran. Bryant, a ceramic artist who runs a business called Modern Chintz, said she made the “mistake” on purpose.

“I wanted to have a plate that would just make people giggle … if they got the joke,” Bryant told Marketplace. Her inspiration was a mug commemorating the wedding of Prince William that bore a picture of Harry by mistake. Her joke is paying off: The plate is selling fast and at $35 a pop. Declaring herself skeptical about the role of monarchy in the modern age and unexcited about the royal wedding, Bryant concedes that she is, nevertheless, cashing in on it.

“I am! I am indeed! And that makes me very happy!” she said.

Her happiness might be short lived, if the royal legal crockery begins to fly if, say, there are legal problems over the use of Markle’s image. But Bryant is planning a pre-emptive peace offering to the happy couple: her plate … as a wedding present.