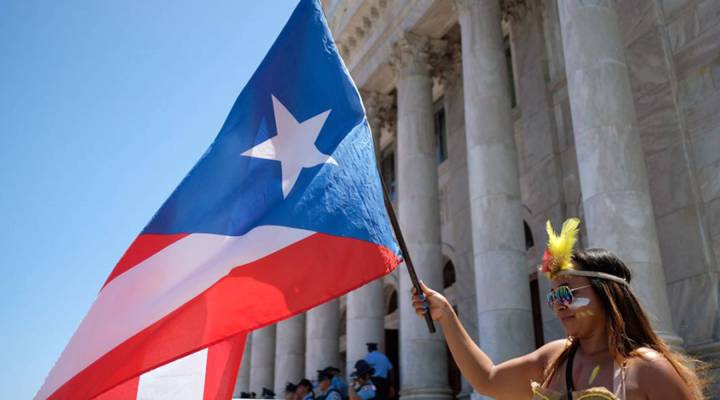 It’s been seven months since Hurricane Maria hit Puerto Rico, and the island is still facing some serious problems. This week, an islandwide power outrage left most of Puerto Rico in the dark. And teachers along with parents have been protesting the Education Department’s plan to close 283 schools. Host Kai Ryssdal checks in with Marketplace reporter Lizzie O’Leary on the latest news of Puerto Rico’s recovery. The following is an edited transcript of their conversation.

Kai Ryssdal: First of all tell me where you are. And second of all, what’s the deal with the power, the latest you’ve got?

Lizzie O’Leary: I’m in Toa Baja, which is about 15 miles outside San Juan — it was area that was really hard hit by Hurricane Maria. You can probably hear behind me there’s some rain. We’re at a FEMA and Small Business Administration site. We just talked to the mayor here. This place is running on generators, though power had been back in Toa Baja until yesterday. It’s pretty much returned to the island. One of the hard things is getting accurate information — kept coming in and out around our hotel last night. But it seems to be coming back as far as we can tell and as far as the electric company says.

Ryssdal: So you were in Toa Baja, I guess when you were there in November. What’s changed in the six, almost seven, months now?

O’Leary: There’s a lot less debris, some of the stoplights are working, there are more signs of life and more open businesses. But you can still tell that a major hurricane came through here. Lot of blue tarps still for roofs. This was an area that was also flooded pretty heavily from the river nearby. So they’ve got a long way to go.

Ryssdal: Can you get a cup of coffee and a loaf of bread and go to the market?

O’Leary: Yes and no. It depends on where you are. We check back in with the convenience store owner, and, you know, he’s put about 75 grand of his own money into his store. But he does have supplies, slowly.

Ryssdal: So before the power went out, you were originally going to go down there and report on, at least part of the reporting was going to be schools and education. What’s going on with that on that island?

O’Leary: So there’s a plan from the governor and the education secretary to close 283 schools here. They say it’s largely because of population declines both before the storm, because the debt crisis, and after the storm. There’s also a bill to convert some of the schools into charters and offer some vouchers. As you can probably guess, a lot of the parents and certainly the teachers unions are not happy. We went to a protest at JFK Elementary School here on Toa Baja, which is slated to be closed. [Sound of protesters in front of the JFK Elementary School.]

Ryssdal: Who is Julia? What are they saying?

O’Leary: Julia is Julia Keleher, she’s the secretary of education. That was teachers and kids — little second graders — marching around with signs. They are talking about Julia Keleher. And I interviewed her, basically said, “Look, you are putting forth this fairly aggressive plan, a lot of people are not happy with it. What do you say to them and how do you move forward?” And here’s what she had to say.

Julia Keleher: We haven’t bought books in probably eight years. My kids don’t have access to technology. So in order to be able to make that kind of investment and purchase the materials that they need, and in order to be able to pay teachers a better salary — they haven’t gotten a pay raise in 10 years — I mean, part of this adjustment is to be able to serve other purposes, right? It’s not just consolidating for the sake of consolidating. This is about a strategic use of the dollars that are available, and a disciplined approach to reinvesting so that we can get better outcomes, because that’s really the end game.”

O’Leary: I think they are probably going to get them, but it’s not going to be an easy process. One of the things that the mayor of Toa Baja told me, and I’ve seen this again and again, is nobody trusts anybody right now. And there are a lot of extremely difficult conversations that are happening, and it’s really hard to do that when you have a massive trust deficit.

Ryssdal:  Yeah, I bet. So listen, really quickly, I heard you on the morning show with David Brancaccio this morning talking about your interview with Gov. Ricardo Rossello. What does he have to say about, I don’t know, like the next six, eight, 10 months on that island?

O’Leary: I think he wants to do something that I’ve heard from several people in power, which is sort of reinventing Puerto Rico. More than one person has used the New Orleans post-Katrina analogy with me. And that’s a complicated analogy. One thing that is still hanging over this is we don’t know exactly what the bankruptcy judge who was overseeing the island’s bankruptcy is going to say about this, and the Oversight Board, which looks at Puerto Rico’s financial statements. In that respect, it’s really hard to say who’s in charge. Gov. Rossello can say he wants a lot of things, but if the Oversight Board says, “Meh, we don’t like this plan,” then tough.