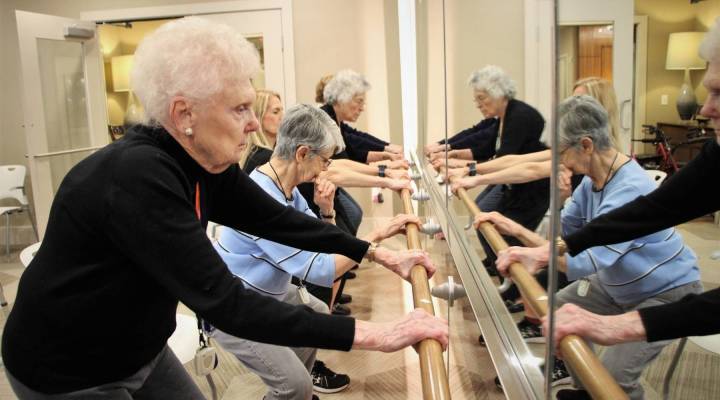 The U.S. Census has projected that people age 65 or older will outnumber children under 18 by the year 2035. For now, as the baby boomer generation is aging, it is also reshaping senior living — and some older seniors are already trying it out.

Marilyn Oliver, 89, said she often takes several exercise classes a day and then she gets ready for the residential happy hour— which happens every day at 4:00 p.m.

Oliver lives at Avanti Senior Living, in Houston. Its developers say the industry is starting to view assisted living more as hospitality; offering restaurant-style dining and a décor that resembles more of a boutique hotel.

Dr. Vaunette Fay, a professor specializing in geriatric care at the Cizik School of Nursing at UT Health in Houston, said facilities that have been in existence for a while are having to upgrade their offerings. Aging baby boomers, said Fay, want the same lifestyle they’ve pretty much always had.

“In the past probably five, maybe even 10 years, we’ve seen a real growth in the number of communities that are designated as senior living,” Fay said. And along with that growth comes new ways to help residents in their daily lives; not just through perks designed to aid in socialization like happy hour, but also through new technology.

“Memory care is a growing need,” Fay said. “As we live longer, there are more folks that are diagnosed with Alzheimer’s, or other dementias. And so they need the care and support. Many live at home with a loved one, but at some point, that may become not possible, for them to stay at home.”

Fay said emerging monitoring technology can be found in these new senior living communities. For example, some beds can have sensors, which inform someone when seniors get up.

“There’s a real move toward smart homes. And it’s one of those things where it’s not real obtrusive monitoring. And it doesn’t tend to interfere with your independence,” Fay said. “It’s that safety level of notifying somebody your patterns are different. Like, my normal pattern is when I get up, I turn on the coffee, [and] I go to the bathroom. And, if those things don’t happen, or they’re outside the parameter of what’s usual for me, then somebody at the facility can be notified so they can go check.”

The Pew Research Center estimates there are about 74 million people in the baby boomer generation. And seniors who are already retired say this kind of service comes with a a steep price.

Marilyn Oliver, the senior resident in Houston, said it takes everything she has to live at Avanti.

“A lot of my friends can’t afford to live in a place like this,” Oliver said. “One of my friends in church, she’s living with her son now. And she wanted to live over here, and he lives down near Galveston. But she couldn’t afford to live in any place over here. And there are some places that aren’t so expensive, but they are a year wait to move in … I think it’s much harder because they don’t have a choice, they’re stuck at home.”

Oliver said she pays $5,200 a month — that includes meals, activities, transportation, housekeeping and utilities. To afford that, she said she uses all of her retirement savings, social security, and her late husband’s military pension. Her advice?

“Save your money, kids,” Oliver said, with a laugh. “It’s going to be expensive when you get to be this age.”