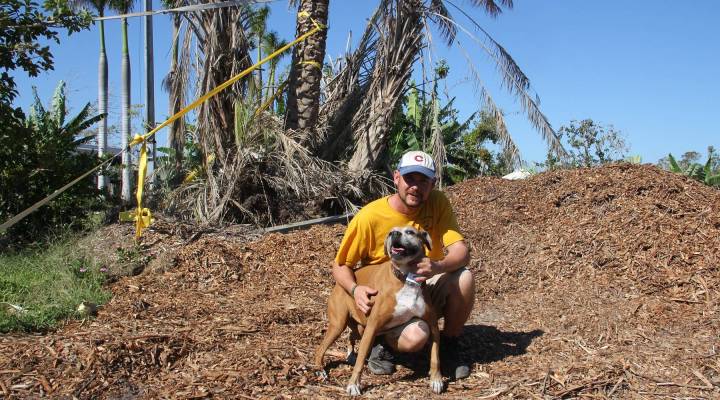 COPY
Patrick Garvey with his dog, Bella, who rode out Hurricane Irma in the Keys with him. Garvey and Bella are living in a camper on the Grimal Grove property while his wife and twin 4-year-old daughters are staying with family in Brazil. Nancy Klingener/ for Marketplace

Patrick Garvey with his dog, Bella, who rode out Hurricane Irma in the Keys with him. Garvey and Bella are living in a camper on the Grimal Grove property while his wife and twin 4-year-old daughters are staying with family in Brazil. Nancy Klingener/ for Marketplace
Listen Now

It’s been more than six months since Hurricane Irma and the Florida Keys had a busy spring break this year. But while lots of people enjoyed going to the beach, diving the reef or hitting the bars, some residents in the Florida Keys are still living with Irma’s aftermath as a daily reality.

On Big Pine Key, Bill Tubbs is spending a lot of time working on his garden.

“Otherwise I’d want to put my fist through a wall and considering this is concrete block, that would be really painful and it wouldn’t hurt the wall,” he said.

Tubbs said he’s frustrated because more than six months after Hurricane Irma, he and his family are still basically camping out in their own house. They have a rigged-up sink and some electricity. The walls are down to studs.

The county’s tourism agency has spent millions to promote the islands and assure visitors that they should return. In the Keys, tourism provides more than half the local jobs. But that message is hard for some residents, like Tubbs.

“I think people, at least in Big Pine, are getting tired of hearing how the Keys have recovered and everything is going great,” he said. “And — it’s not, for a lot of us.”

The county initially found his ground-level home was more than 50 percent destroyed – which would have meant rebuilding and elevating his home to meet current codes. Tubbs appealed that judgment because he thought it was below the 50 percent threshold.

But he recently received a letter calling his property “substantially damaged” – which means he might have to elevate the concrete block house after all. That would cost a lot more than the repairs he was planning on making.

“I feel like we’re taking a step forward — and we get pushed two steps back,” he said.

Bill and Lisa Tubbs stand in the kitchen of their home on Big Pine Key.

Fewer than 200 households in the Keys are still living in FEMA housing. Others are improvising, like Tubbs and Patrick Garvey, who also lives on Big Pine Key. He’s installing a fence around his two acre property called Grimal Grove.

For a lot of property owners, installing a fence is no big deal. But for Garvey, getting Grimal Grove secure is a big step to getting past hurricane Irma — and reuniting his family.

“I had some different ventures going on with the property that I was hoping to create a little income stream,” he said. “And that was lost.”

Now he’s working as a tree broker — finding trees on the mainland to sell to people in the Keys who want to replant their yards. And working to get Grimal Grove up and running again.

“The storm’s definitely made me reconsider certain things in life, priorities in life. It’s pretty tough to be away from your wife and kids for as long as I have been,” he said.

Garvey’s wife and twin 4-year-old daughters were visiting family in Brazil when Hurricane Irma hit. And they’re still there, while Garvey is living in a camper on the property.

“I can’t be doing that forever, but right now I have nowhere else to live,” he said. “Technically, I guess I’m technically homeless.”

Stephanie Kaple is head of a coalition of nonprofits that formed to help people recover from the storm over the long term.

“That does not happen overnight,” she said. “It doesn’t happen in weeks or months. This is going to take us years.”

Since Oct. 1, when the Keys officially re-opened for tourism, the amount of lodging taxes collected is down by about 20 percent compared to the year before.

Local governments in the Keys have spent almost $150 million so far cleaning up after Hurricane Irma.