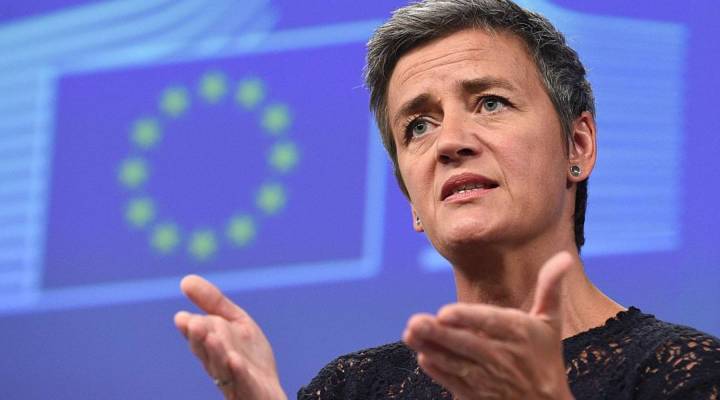 She’s the woman taking on some of the biggest tech companies in the world, and she has a response to some of the statements Facebook’s Mark Zuckerberg made on Capitol Hill this week.

Margrethe Vestager — the European Commissioner for Competition — enforces antitrust rules aimed at making sure businesses don’t have an unfair advantage. Her team has brought charges against Google, fining them $2.7 billion for allegedly manipulating search results, ordered Amazon to repay Luxembourg $295 million in back taxes, and tried to take Ireland to court after its failure to collect $13 billion in back taxes from Apple.

“Since assuming her office, Vestager has become, unexpectedly, the most prominent antitrust official in the world, invited to speak at conferences and mobbed by autograph seekers,” wrote the New York Times.

On Tuesday and Wednesday, Zuckerberg spoke to Congress about the revelations that data firm Cambridge Analytica harvested personal information from Facebook’s users to target voters during the 2016 presidential election. The scandal has raised questions about our online privacy, Facebook’s dominance in the social media landscape, and whether we should take a page from Europe’s internet regulations, which are generally more consumer-focused.

Vestager stopped by to talk to us about all of these concerns, along with claims that she’s unfairly going after U.S. companies to give European ones an advantage. Below is an edited transcript of the interview.

David Brancaccio: You are further along the curve in thinking about public policy in the big tech companies. In what ways do you hope Washington learns from Europe?

Margrethe Vestager: Well, of course, it’s for you and the U.S. to figure out what you want to do. What we have been thinking over the last couple of years is that we need some citizen-centered rights. Because we see that people feel that they are out of control, but they don’t know what is happening, that they feel powerless. And what we want to do is, of course, to make sure that they know that someone is looking after them when big, big companies might misuse their position. But also to give them rights that are enforceable, because you tick boxes because there’s 100 pages of terms and conditions. You need to know what you’re signing up to. And this we would like to give citizens in Europe.

Brancaccio: I mean your job is a promoter of competition — what we Americans call antitrust. Why is protecting, for instance, privacy your issue at all?

Vestager: Well, you know it comes together as a whole, because we find that competition, law enforcement — as I do — and regulation, it has to go hand in hand. Competition law enforcement cannot do the full trick, but neither can regulation because you need a competitive dynamic marketplace. You need innovation that is driven by competition. And this is why I would take such an interest in privacy, also because it shouldn’t be a competitive edge for you that you completely disregard the need of of each and every one of us to have privacy.

Brancaccio: You must’ve liked the bit from the Facebook CEO testimony in the Senate earlier this week. When he’s asked if the Europeans got it right, he said he thought the Europeans got some of it right. There you go, commissioner.

Vestager: Well, I think that it’s a sign that we really have a global business community. That they say, “Well, now we have to adjust the way we do privacy in Europe and we will then just make it global because that makes it easy for each and every one of us. And we set a global standard.” This is a different standard. It gives us and individuals better rights, like the right to be forgotten. The right to take our data and go to another service supplier, and it gives the obligation of businesses only to take the data that they need in order to provide the services, and not everything else around it. The name of your dog and your mother’s maiden name and not what have we. And that I think is important, that we also agree on something that makes sense on a global scale and simplifies for business what they have to deal with.

Brancaccio: I don’t know if you’ve noticed this, but I found it so interesting: some state attorneys general, the top law enforcement official in some U.S. states, have acknowledged that they’ve looked at what you have done, what Europe has done and thought about ways that they could craft something in that image in their state.

Vestager: Well, that is, of course, the most amazing compliment that you can can give, and we take it to heart that people are following the work that we do and take inspiration from it to figure out what they want to do themselves, when they take the responsibility for citizens in their state and their possibilities. In Europe, we have no ban on success. If customers like your products, you can grow and grow and grow. What we don’t like is if you if you grow so big or so in your own head that you think that you can misuse this dominant position to deny others the chance to do the same as what you have been doing yourself. And this is the recipe of the Google case that we have decided on. We have two more Google cases to come.

Brancaccio: There was an important issue that came up among many in the U.S. Senate this week, when the Facebook CEO was on hand. It was the idea that regulation actually favors the bigger dominant companies. If you would listen to this extract of Mark Zuckerberg talking with Sen. Dan Sullivan of Arkansas:

Zuckerberg: I agree with the point that when you’re thinking through regulation across all industries, you need to be careful that it doesn’t cement the current companies that are winning.

Sullivan: But would you try to do that? Isn’t that the normal inclination of a company to say, “Hey, I’m gonna hire the best guys in town and I’m gonna cement in an advantage.” You wouldn’t do that if we were regulating you?

Zuckerberg: Senator, that certainly wouldn’t be our approach. But I think part of the challenge with regulation in general is that when you add more rules that companies need to follow, that’s something that a larger company like ours inherently just has the resources to go do. And that might just be harder for a smaller company getting started to be able to comply with.

Brancaccio: More regulation, a greater burden for the smaller upstarts. What are your thoughts, commissioner?

Vestager: Well, I’m not in any way in a position to second guess the motives of Facebook, but we’re trying to very careful with this very fundamental point that regulations should also be doable for smaller businesses. Because if you put too much of a regulatory burden on a small business, they will never ever be able to compete with the bigger guys. So that, of course, is a concern when you draft a proposal, when you discuss it with the legislature. “How should this work in the real world?” But the thing is that if you don’t regulate and sort of frame the market, then competition will never take place because then you have just the laws of the jungle and not the laws of democracy that allows competition to thrive. And for the smaller one actually to have a fair chance of presenting their services and products to consumers.

Brancaccio: This point that I’m about to raise, Apple CEO Tim Cook once suggested it. When he was president, Barack Obama suggested. They say your aggressive approach to this regulation is meant to rein in U.S. tech companies, so European companies can get an advantage. Is that what you’re up to?

Vestager: You know, everything I do will have to stand up in court, and no court will hear anything about your gut feeling, your politics, protectionism. They just want the facts of the case — how you enforce competition. So we have the courts to keep us prudent and honest, and even if we didn’t have that, it wouldn’t serve European consumers if they couldn’t take the offers, buy services from U.S. companies. One of the reasons why U.S. companies are so successful in Europe is that we like you.

Vestager: Oh yes, indeed. You know, if I ask my daughter, “Why do you Google all the time?” They say, ” Oh, but it’s because it works. This is how we find things.” And I think that is a very common approach. It works. I’m so old I can’t remember what it was trying to find something before we could Google it. You gave up half the way through a long, long, long address you had to type in, because you would make so many errors. You know the innovative capacity, the services produced and offered. The only thing that Europeans don’t like is if the small guy does not have a chance, because the bigger guy is misusing his powers.