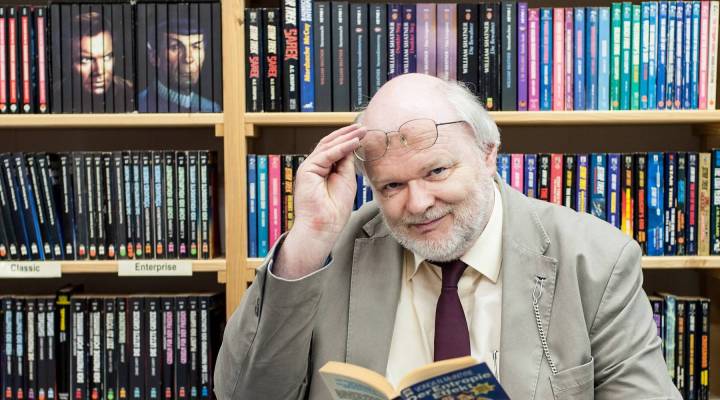 COPY
Fantastic Library founder Thomas Le Blanc has built a sci-fi and fantasy collection of more than 280,000 titles over the past three decades. Andreas Reeg for Marketplace

Fantastic Library founder Thomas Le Blanc has built a sci-fi and fantasy collection of more than 280,000 titles over the past three decades. Andreas Reeg for Marketplace
Listen Now

Self-driving cars, 3-D printers and robots are just a few inventions first hinted at in science fiction that later became a reality. That’s one reason why companies are visiting the small town of Wetzlar, Germany. Wetzlar is home to what’s called the Fantastic Library — a large public collection of fantasy and science fiction literature. From the outside, the Fantastic Library looks fairly ordinary. A  few dragon decorations on its facade are the only clue that this small building houses something unusual.

“This is the oldest part of our collections,” library research assistant Klaudia Seibel said while winding through the library’s maze of rooms. She gestured at shelves packed floor to ceiling with books. “These are all pre-war science fiction adventure stories.” Seibel pointed out other various sub-genres of fantasy and sci-fi along the way. Steam punk, fairy tales and horror make up just a portion of the library’s large collection, which includes around 280,000 titles.

The library started in the late 1980s as the brain child of a former physics teacher,Thomas Le Blanc, who keeps it running mostly through donations and grants. And also through research projects like “Future Life.”

“The idea behind “Future Life” is that there are so many scenarios about what the future might look like in science fiction — we thought companies would be interested in hearing about them,” Le Blanc said. Sci-fi authors are well known for their predictive abilities. For example, “Star Trek” writers imagined devices that performed like cell phones and Bluetooth headsets long before anyone could buy one.

Companies that want to explore what other treasures can be found in science fiction pay from $3,500 to more than $100,000 to mine the expertise of Le Blanc and his team. The library offers lectures, brainstorming sessions and staff who will pore through thousands of books to assemble reports on specific questions.

“We started with transport issues,” Seibel said. “Will people drive cars or not? The basic stuff.”

Now they work with urban planners, regional governments and even cosmetics firms. Seibel said companies are often less focused on product ideas and more curious about how consumers might react to new technology.

“The basic thing about science fiction is that the writers think very deeply how the interaction between technology and people can take place,” Seibel said. “They give story lines, and sequences of actions  and worlds and that’s what the firms are interested in.”

That’s what the vice president of Deutsche Telekom’s Design Gallery was after. Stefan Kohn is responsible for the future and innovation forum at the telecommunications company. He worked with the library to create a booklet covering future trends.

So Kohn and his team looked at other ways humans and machines might interact.

“That sparked an internal discussion where we are analyzing how we as Deutsche Telekom are handling the topic of artificial intelligence and what is our digital responsibility,” Kohn said.

While the library may help Deutsche Telekom answer its questions about the future, the Fantastic Library itself is not futuristic. The library’s capacity is somewhat limited since staffers do research the old fashioned way. No robots — just people reading books and writing down ideas.