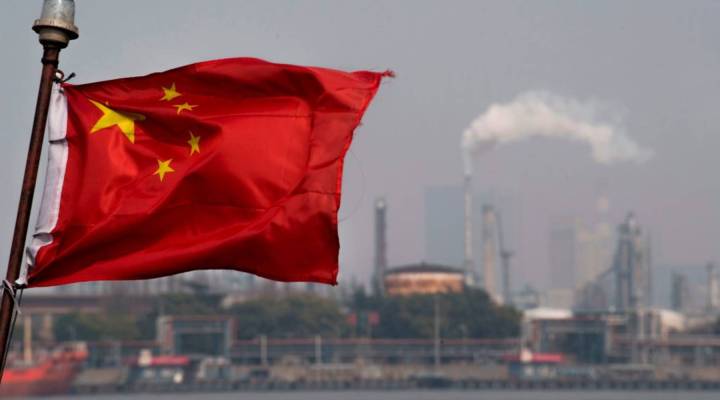 This picture taken on March 22, 2018 shows a Chinese flag fluttering in front of the Shanghai Gaoqiao Company Refinery in Shanghai. JOHANNES EISELE/AFP/Getty Images

Pork, soybeans, fruit, small aircrafts, wine. These are just a few of the 106 American products that might be subject to future tariffs, the Chinese government warned on Wednesday. As for when the 25 percent tariffs would take effect, China said that depends on President Donald Trump and his threat to place similar tariffs on Chinese goods entering the U.S.

The suggested tariffs are just that: suggestions — or threats, if you will. However, they are already having an impact on the U.S. economy by creating a lot of uncertainty for various industries.

What’s more, the potential tariffs are wide ranging and encompass multiple industries that employ about 2,103,026 people nationally, according to Mark Muro, senior fellow and policy director of the Metropolitan Policy Program at the Brookings Institution. And it’s not just workers in the Rust Belt, either. Muro points out that about 1,062,455 of the jobs at risk are held by people who voted for Trump, while another 976,585 are held by Hillary Clinton voters. These voters live in 2,783 counties across the U.S. that would be impacted if the Chinese tariffs go into effect. About 2,279 (82 percent) of those counties were called for Trump in the 2016 presidential election.

Those who support President Trump’s tough stance on trade with China say that tariffs could boost American production at home and allow American producers to be more competitive, leading to more job creation.

“It’s certainly true that this could lead to a period of negotiation that leads to a new normal in which maybe some industries do better or it leads to negotiations that address some of the real problems in the Chinese-American relationship that might be good for industries,” Muro said. However, he added, this also launches “a period of uncertainty for U.S. trade policy, on the one hand, but also for particular industries in particular counties.”

Counties with the darkest color would see the highest share of jobs impacted. Chinese tariffs are “shrewd and layered” as they affect both red counties in the manufacturing heartland and blue counties that produce nuts, wine and pharmaceuticals, according to Muro.

For more on how the potential tariffs would impact U.S. industries, read the rest of our interview with Muro below:

Marketplace: Looking at this map of how different areas might be affected by the Chinese tariffs, what’s the main takeaway?

First it’s important to note that these are, at this point, kind of performance art. There’s positioning. There’s threats. The Chinese tariffs are not yet real. And even if these happened, not all of these jobs would be lost. Not all of the jobs that we highlight as being potentially at risk would be lost. This is very much the first stage. With that said though, you see a very interesting map of the U.S. economy here. You know, it seems that the Chinese are very astute about what kind of industries and famous brand products come from where. So you see things as diverse as Boeing jets to Napa Valley wine are involved. It’s very interesting and diverse. It seems to me that the Chinese have a good feel for how America works and that’s visible here.

So you think they picked very particular items to target for their tariffs?

I do. I think this shows a good amount of knowledge and they’ve pushed a lot of hot buttons whether it’s in the industrial heartland with potential tariffs on cars to high performance aircraft to picturesque agricultural places such as the Central Valley in California or even hog slaughter all across the Midwest or corn farming. A lot of things are implicated and it seems that it’s more than just random. These are products that sort of loom large in the American imagination and they bug people. Also, it’s not just red America. It’s also blue America. All of the auto supply chain is very much Trump’s Midwestern base. You do have wine in California or apples and jets in Washington state, which are states with blue Senators.

I think that disruptions to the auto industry could be very disturbing to people. It’s a large industry, a lot rides on it. It has a big supply chain that extends into so many communities. The disruptions of auto really can stir up the country.

China’s new 301-related retaliatory tariffs go well beyond wine and ginsing to get serious about America’s industrial base.