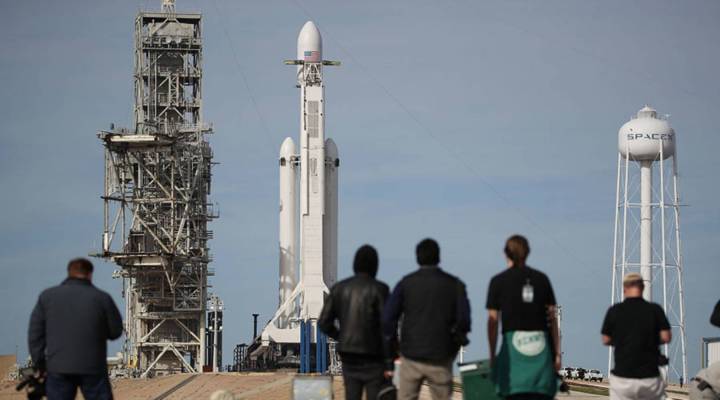 In his book “The Space Barons: Elon Musk, Jeff Bezos, and the Quest to Colonize the Cosmos,” Christian Davenport explores the new narrative surrounding the modern-day space race: wealthy individuals from private companies competing against one another in order to reach the stars. In the excerpt below, read about the team at Blue Origin’s headquarters in Seattle and the readily changing space industry.

They caught their first glimpse of it at 25,000 feet and falling fast. Normally, a rocket dropping like a bomb would be cause for panic. But instead, the four hundred or so people gathered in the employee lounge at Blue Origin’s headquarters outside Seattle were thrilled to see the booster plummeting toward Earth.

The employees, mostly engineers, were packed in, watching the rocket in free fall on a giant screen. Some had their hands over their mouth. Others sat forward with fists clenched. Mostly, they were silent, waiting for what would happen next.

“Engine start,” said the flight controller. “We have thrust.”

At that, the employees started cheering wildly. Just minutes before on this morning three days before Thanksgiving in 2015, the engine had fired to lift the rocket off the launchpad at Blue Origin’s West Texas test site, flying it faster than the speed of sound past the 62-mile threshold that’s considered the edge of space. But now that the rocket was falling back, the thrust had the opposite effect: it was slowing the rocket down, preventing it from slamming into the ground and exploding.

As the ground came into view, fire from the engine kicked up a plume of dust. The employees at Blue Origin rose to their feet in unison. The rocket was under control, descending gently, like a hot-air balloon coming in for a landing.

“One hundred and fifty feet,” the flight controller called out.

There was one last flash of the engines, a bright orange glow shining through the dust and smoke. Then, it went out.

The room broke out in pandemonium. The employees celebrated wildly, hugging one another, giving high fives. The rocket booster stood in the center of the pad like a giant trophy. Jeff Bezos had watched from the control room of his company’s West Texas launch site. It was “one of the greatest moments of my life,” he would later say. “I was misty-eyed.”

Twenty-eight days later, another rocket was falling from the sky. This time, it was a much bigger booster that had been flying at a much greater velocity, a speed capable of crossing not just the threshold of space but of getting its payload to orbit Earth. For this landing attempt, the chances of success were even more improbable, the chance of disaster, far greater.

About ten minutes after blasting off into the dark, evening skies over Cape Canaveral, Florida, the fire from the rocket engine suddenly appeared like a streetlight in the distance, a shimmering, ethereal beacon lowering through the clouds.

As they watched on television screens, the SpaceX employees who had gathered at the company’s headquarters outside Los Angeles on this evening just before Christmas 2015 cheered it just as their rivals at Blue Origin had done—and then some.

Elon Musk watched the rocket reappear from outside on a causeway. Then, he sprinted back into the control room to see the image of the rocket standing proudly on the landing pad. Like Bezos, he would say this was one of the greatest days of his life. A “revolutionary moment,” he called it, one that “quite dramatically improves my confidence that a city on Mars is possible.”

Some fifty years after the advent of the Space Age, no one ever had flown a rocket past the edge of space and landed it vertically. Now, it had been performed twice in less than a month.

For generations, spaceflight had been celebrated largely for the takeoffs. But the landings were reminiscent of Neil Armstrong and Buzz Aldrin’s touching down on the surface of the moon in the lunar module. Or the “seven minutes of terror” landing of the Curiosity rover on the surface of Mars. The sight of the boosters standing on terra firma, scorched but triumphant, portended a sense of arrival, and offered hope for another Apollo 11 moment, the next giant leap many had felt they were promised but had never come.

Even more impressive was that the landings had been accomplished not by nations—not even NASA had pulled off such a feat—but by a pair of private companies. Backed by billionaires intent on developing reusable rockets, which could fly, land, then fly again, they were pursuing a holy grail—a technology with the potential to dramatically lower the cost of space travel.

For decades, the first stages of rockets were ditched into the ocean after powering their payloads to space. To Musk and Bezos, that was an incredible waste, like throwing away an airplane after flying from New York to Los Angeles. Now they had shown that rockets could fly not just up, but back down, landing with precision and reigniting interest in human space travel in a way not seen in decades.

The landings had touched off celebrations not just at Blue Origin and SpaceX, but among their legions of growing fans, who watched the viral videos by the millions. It was the 1960s revisited, but on YouTube and Reddit, where the new space fans congregated the way enthusiasts once crowded Cocoa Beach along the cape. With unbridled enthusiasm, they cheered this new Space Age, just as their parents cheered John Glenn blasting off to orbit in a moment that eroded Walter Cronkite’s steely, newsman’s detachment. “Oh, go baby!” he had gushed, live on air, as that rocket tore a hole in the sky.

Musk and Bezos were the leaders of this resurrection of the American space program, a pair of billionaires with vastly different styles and temperaments. Always audacious, Musk had plowed far ahead, his triumphs and failures commanding center stage. Bezos remained quiet and clandestine, his mysterious rocket venture kept hidden behind the curtain.

But there were others. Like Bezos, Richard Branson was promising to fly tourists past the edge of space to get glimpses of Earth from above and experience a few minutes of weightlessness. Paul Allen, the cofounder of Microsoft, who had backed the first commercial spacecraft to reach space, was now building the largest airplane the world had ever seen. Bigger than Howard Hughes’s Spruce Goose, it would be able to “air launch” rockets from 35,000 feet—and perhaps even a new space shuttle, called “Black Ice,” it was developing in secret.

Together these Space Barons were behind some of the biggest brands in the world—Amazon, Microsoft, Virgin, Tesla, PayPal—that have disrupted industries ranging from retail to credit cards to air travel. And now they were betting vast swaths of their enormous fortunes that they could make space available to the masses, and push human space travel past where governments had gone.

The story of their dramatic struggle to open the frontier was an improbable one, full of risk and high adventure, a crash that cost the life of a test pilot, a rocket explosion, and suspicions of sabotage. There were lawsuits pitting an underdog upstart against the nation’s military-industrial complex, a political fight that went all the way to the White House, visions to put humans on the moon and Mars, and, of course, the historic landings that heralded what Bezos was calling a new “golden age of space exploration.”

At its heart, the story was fueled by a budding rivalry between the two leaders of this new space movement. The tension would play out in legal briefs and on Twitter, skirmishes over the significance of their respective landings and the thrust of their rockets, and even a dispute over the pad that would launch them. Musk, the brash hare, was blazing a trail for others to follow, while Bezos, the secretive and slow tortoise, who was content to take it step by step in a race that was only just beginning.

The above has been excerpted from The Space Barons: Elon Musk, Jeff Bezos, and the Quest to Colonize the Cosmos by Christian Davenport. Copyright © 2018. Available from PublicAffairs, an imprint of Perseus Books, LLC, a subsidiary of Hachette Book Group, Inc.