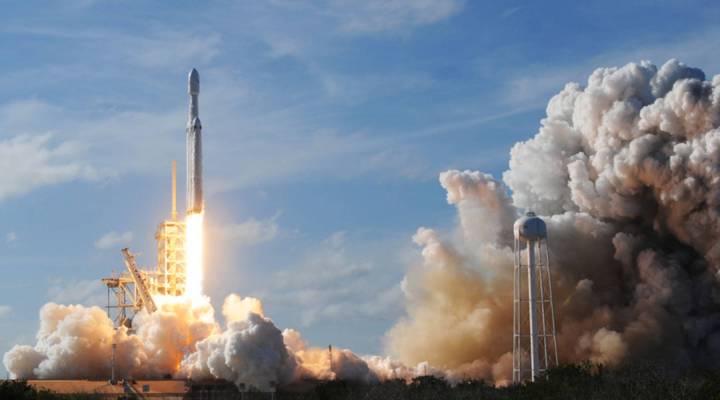 COPY
The SpaceX Falcon Heavy launches from Pad 39A at the Kennedy Space Center in Florida, on Feb. 6, 2018, on its demonstration mission.  JIM WATSON/AFP/Getty Images
Shelf Life

The SpaceX Falcon Heavy launches from Pad 39A at the Kennedy Space Center in Florida, on Feb. 6, 2018, on its demonstration mission.  JIM WATSON/AFP/Getty Images
Listen Now

It’s been almost fifty years since government scientists put Neil Armstrong on the moon. Now, the quest to put people in space is being led by private companies. Specifically, wealthy individuals like Elon Musk, Jeff Bezos, Paul Allen and Richard Branson. Christian Davenport writes for The Washington Post and has a new book out called “The Space Barons.” He talked with Marketplace host Kai Ryssdal about the billionaires trying to make space travel routine. The following is an edited transcript of their conversation:

Kai Ryssdal: First of all, give me an update would you? Where are we on plans for these two guys to get us — not just into space really, but for Musk anyway — to Mars.

Christian Davenport: Well the first next step for both these guys is to fly human beings. I mean for all the triumphs and all the attention they’ve gotten, let’s not forget that SpaceX has yet to fly a human being into space. And that first flight could come as early as this year, though maybe next year, flying NASA astronauts to the International Space Station. Jeff Bezos also wants to start flying human beings for space tourism flights. Those two could begin this year. And let’s not forget Virgin Galactic, which also wants to fly tourists into space and he’s got 700 people or so signed up who are ready to do that.

Ryssdal: Right. Virgin Galactic, of course, being Richard Branson, which we’ll get to in a bit. Something you said that is going to take me on a little detour from what I wanted to talk to you about — they’re going to fly NASA’s astronauts so it’s important to note here that that these two guys, specifically Musk and Bezos, are concentrating on hardware. They’re not doing the astronaut program thing.

Davenport: What’s happened is, NASA retired the space shuttle in 2011. So the United States government and NASA has not had the ability to fly astronauts from U.S. soil since then. We pay the Russians to do it. So what NASA started to do was they said, you know what, we’re going to contract this out, we’re going to outsource this service of flying astronauts to the International Space Station. They’ve hired SpaceX and Boeing to do that. And the idea is that by contracting that out to the private sector NASA then can focus on deeper space. Trump has talked very specifically about wanting to partner with these companies in order to go back to the moon.

Davenport: That’s right. Elon is brilliant at marketing and PR and gets all sorts of attention and is just brash. I mean you saw the pictures of the Tesla flying around in space with the mannequin inside.

Davenport: Or a stunt, right? But it got a lot of attention. And while he’s been sort of the brash hare, you’ve got Jeff Bezos — and so many people don’t even realize that Jeff has a space company. People don’t know Blue Origin and that’s largely by design. But now we’re at a really critical moment where they’re starting to come out of the shadows a little bit. And so, two of them could be in competition.

Ryssdal: We should say here that Jeff Bezos owns — and I’m obliged to add here — in a personal capacity, the paper for which you work, The Washington Post. You call him Jeff, I would call him Mr. Bezos, but that’s a whole other deal. I think it’s interesting the approaches the two of them are taking. Bezos is all like mythical, “the new John Glenn rocket” and he’s got a motto for his company. As far as you can tell from SpaceX and Elon Musk, it’s get to space and break things, and do it fast and get a lot of press, you know?

Davenport: Yeah, I mean that’s sort of the different approaches that they’ve taken. Elon was out there getting attention trying to break into the market and he had to break things. Not just like testing rockets but suing people. I mean he waged a huge lobbying campaign in Washington for the rights to be able to compete for some of these contracts and ultimately won. And because SpaceX has paved the way, you could see Blue Origin sort of following in that track and being able to do that.

Ryssdal: A word here about tourism in space: Richard Branson and Virgin Galactic, and SpaceShipOne and Paul Allen. It’s it’s still very much a rich person’s bailiwick, right? I mean you know the first person to go to space is not going spend $29.99 for a commuter ticket?

Davenport: No they’re paying $250,000 a ticket. And that’s what it costs. And we don’t know what Blue Origin is going to charge its customers who go to space. They haven’t announced that yet, or whether they’ll be any deal with Amazon Amazon Prime.

Davenport: But knowing how they operate, you would think they would come in and undercut the market. The idea is though, is that at first it will cost $250,000, at first it will be for the rich only. Then, if they’re able to do it safely and reliably, and they can prove that this is a real viable industry, and nobody gets killed, then the idea is that the costs would come down. Another part of it is that once you can get to space affordably and reliably that could open up all sorts of business activity in space from small satellites, manufacturing and space, and they see this as a precursor to being able to do that.

Click here to read an excerpt of “The Space Barons: Elon Musk, Jeff Bezos, and the Quest to Colonize the Cosmos.”