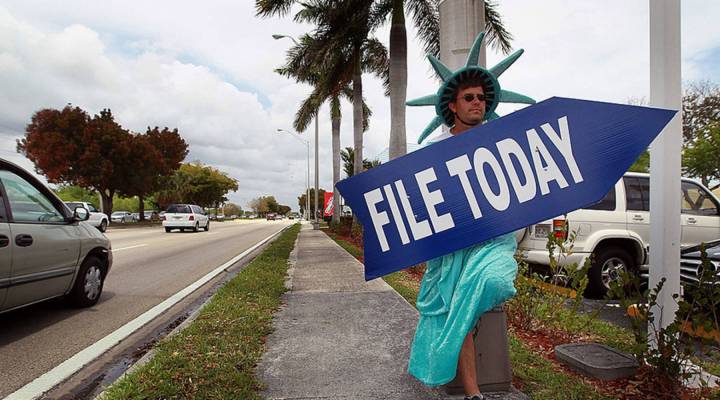 COPY
The deadline for filing taxes is approaching, but some people are already thinking the 2018 tax year. Joe Raedle/Getty Images

The deadline for filing taxes is approaching, but some people are already thinking the 2018 tax year. Joe Raedle/Getty Images
Listen Now

People have taxes on their minds this time of year. But some business owners are preoccupied with planning for next year’s taxes, because of a big new deduction in the tax overhaul. It’s supposed to be for small business owners who report their business income on their individual tax returns. They’re called pass-through businesses, because their profits are “passed through” to the owner’s personal tax return and taxed at their individual rate.

The pass through deduction was made for guys like 29-year-old Christian Perea, an Uber driver and writer in San Francisco. He’s an independent contractor who works out of his apartment.

“You might hear my cat meowing in the background,” he said, laughing.

Perea drives five to 10 hours a week, mostly as research for his main job — writing for rideshareguy.com, a blog for Uber and Lyft drivers. He’s been spending time dissecting the pass-through deduction and has become something of an expert on it and gig workers.

“I’m excited that I might be able to save money,” he said.

Perea said his income varies, but typically it’s under $70,000 a year. He qualifies easily for the 20 percent pass-through deduction, because the threshold is roughly $157,500 in taxable income for individuals and double that for joint filers. Even though the IRS hasn’t released all the details yet, Perea figures the deduction will save him up to $4,000 on his 2018 taxes.

“I think that this is definitely going to help me be able to do what I want as a self-employed individual, or even starting a business,” he said.

“We’ve helped many Uber drivers, independent contractors, Lyft drivers, gig workers,” she said. “Even people who play music who incorporate and then have this sort of tax savings.”

Sweeney said business is up almost 20 percent over last year because so many people are trying to take advantage of the pass-through deduction. That includes Sweeney and her husband, who both have small businesses. She figures they’ll save around $28,ooo next year.

She explains: “We actually just recently met with our accountant and he said, ‘This is going to be great!'”

It’s also going to be great for other small pass-through businesses like plumbers, hairstylists and realtors. They can take the deduction. But high earners in specific fields like law, medicine and investment management generally can’t take the deduction because in the eyes of the IRS, their biggest asset is their reputation or skill. No matter.

“This is the loophole that your accountant can blow up,” said Nick Sher, a 33-year-old CPA in Manhattan.

He’s been talking with clients about various ways they can squeeze through the pass-through loophole.

“So, let’s say there’s a radiologist,” he explained, and she owns her own equipment. “What they could do is they could spin off a business,” Sher continued.

That business would own the equipment. The radiologist would rent it from herself. And her new equipment-rental business would get the 20 percent pass-through deduction. Sher said you can also become a corporation and put yourself on the payroll. He said he recently did that for a client, who could save a bundle.

“I.e., my right pocket will be paying my left pocket,” he said.

But all of these loophole plans have to pass muster with the IRS, and it won’t release final guidance for the new tax law until later this year.