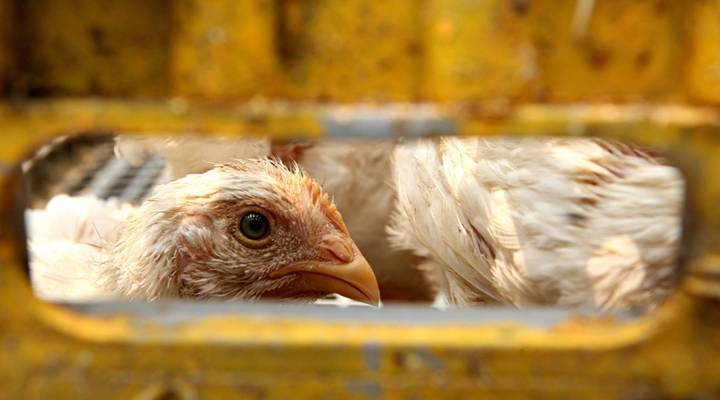 Chickens weren’t directly named on the list of proposed tariffs Beijing put out yesterday, but as it is a global agriculture economy, a potential trade war has implications for the poultry industry as well. Ryssdal called up Ed Fryar, the CEO of Ozark Mountain Poultry in Batesville, Arkansas, to check in. The following is an edited transcript of their conversation:

Kai Ryssdal: So the reason we’ve called you, Mr. Fryar, is because you’re in agriculture, so obviously you’re concerned about this, I imagine, but you’re kind of on the periphery. So give me a sense of your stress level about these tariffs and all this trade war talk on a scale of 1-10, 10 being really concerned and 1 being not so much.

Ed Fryar: I’m going to be anywhere from about 2 to about an 8.

Fryar: And it depends. What it depends on is right now, this feels more like a trade spat than it does a real trade war.

Fryar: If it’s just a trade spat and this thing is all resolved, then I think the effect of what’s happened or what’s been announced so far will be minimal. If this is the beginning of an honest-to-goodness trade war, then I’m up to about an 8 or so because it will get much uglier than what it has appeared to be so far.

Fryar: The first thing would be for the announced tariffs to actually go into effect. We’re at least a month, maybe as long as three months away before these tariffs actually go into effect. So that gives people, a lot of people, the U.S. and China, a lot of time to sit down and negotiate and work something out. You know, it’s one thing for a couple of little — my cousin and I, when we were growing up used to sit there and say, “Yeah, well, I dare you.” “OK, I double dare you.” “Well, I double dog dare you.”And usually by the time we get to that point my grandparents would intervene or my parents, so it was over with. As long as it’s that type of a thing, then I think it’s going to be minimal effect. If it goes beyond that, then it could really get ugly.

Ryssdal: There’s lots on this list that is tangential to what you do. Hogs, right? A competition for chicken meat, soybean and corn in terms of feed for your birds. How closely are you watching that stuff, because it could wind up being all right for you, you know?

Fryar: It actually could be, although I would much rather have all of this resolved. There’s enough uncertainty to begin with, and this just adds another layer of uncertainty. But if  this causes soybean prices to drop, if corn goes down, obviously, those are better for us because we’re a consumer of both of those. Hog prices going down do not help us because that’s a competitor for our meat — chicken versus pork. But let me temper all of that by saying that at this point, other than causing some extra nervousness, I don’t think there’s been any real impact on the market yet. I know soybeans were down, like, 50 cents early yesterday morning after that announcement was made, but I think a lot of that was due just to sort of the classic, the fog of battle.

Fryar: The market came back. I think today the market’s down around 10 to 15 cents from where it was prior to yesterday.

Ryssdal: You watch it every day? You watch those spot prices every single day and the futures as well, yeah?

Fryar: I don’t watch them that closely every day. But I am very much aware of what they are. Thirty to $35 a ton on soybean meal costs us an additional penny a pound on the live-weight basis. And you know, a penny a pound in our industry — profits in our industry are measured in pennies, not nickels or dimes, but pennies. So you’ve got to watch those commodity prices.