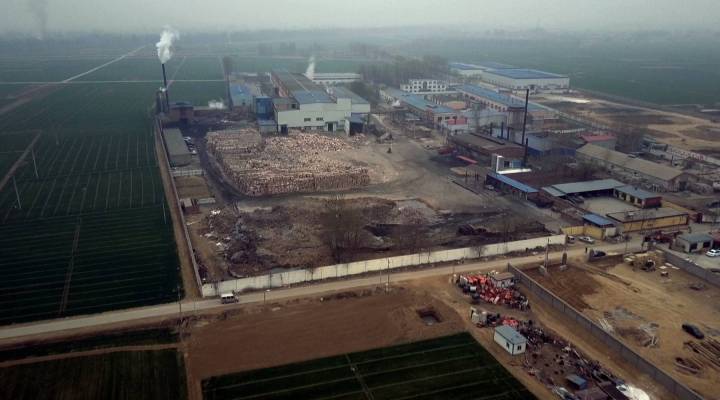 COPY
A scene from the film "The China Hustle." Activist short sellers investigated several Chinese companies that misled investors on the value of their company and used video surveillance on production facilities to see how busy they were. Courtesy of Magnolia Pictures

A scene from the film "The China Hustle." Activist short sellers investigated several Chinese companies that misled investors on the value of their company and used video surveillance on production facilities to see how busy they were. Courtesy of Magnolia Pictures
Listen Now

In his documentary “The China Hustle,” director Jed Rothstein sets out to explore one of the most widespread cases of fraud that most people probably haven’t heard about.

Just after the financial crisis, several hundred Chinese companies were able to list on U.S. exchanges through a process called a reverse merger, which allowed them to enter the markets without the same level of scrutiny that most initial public offerings receive. That proved fateful, as some of these companies knowingly misled auditors and banks about their values. It wasn’t until several activist investors investigated these companies that their fraud was exposed — and for some investors, it was already too late.

Rothstein, who captures that story in his documentary, spoke with Marketplace host Kai Ryssdal about the film. The following is an edited transcript of their conversation.

Kai Ryssdal: Get me from the financial crisis to the point in 2013-ish, right, when when people start becoming aware of these reverse mergers.

Jed Rothstein: Actually, it’s a little different than that. What happened first and where our story starts is in the wake of the financial crisis. A lot of professional investors were looking for a way to make back all the money they had lost, and they turned to China because China was booming. They saw a lot of opportunity investing in these Chinese companies that were listed on U.S. exchanges. A number of them were reverse mergers, some of them were not reverse mergers. But the main point is it was a way for these investors to make back their money.

Ryssdal: Reverse merger: that seems to be the key to this entire thing. So I need you to explain this for me.

Rothstein: Well, a reverse merger in and of itself is not an evil thing and people will point out that there are plenty of brand-name companies that anyone might have heard of that are reverse mergers. But what a reverse merger did at the time was allowed a Chinese company to merge with the shell of a defunct but still legally extant company here in the U.S. and takeover their listing. And it was a way to get more quickly into the U.S. markets and with less scrutiny than a standard IPO.

Ryssdal: When these reverse mergers happen, investors and some of the banks involved who front them in the United States say, “Look, they’re audited financial statements and everything is groovy. And how can this possibly be a bad thing?”

Rothstein: As Jim Chanos, who’s one of the people in the film, says, whenever there’s a big scandal, people ask him, “Well, who are the auditors?” And he says, “Well, who cares? It doesn’t matter. If the management wants to commit fraud, the auditors are unlikely to find it.” And I think what we found in the story in “The China Hustle” is that a lot of the assertions made by some of the management of some of these Chinese companies were false, and the auditors at first certainly didn’t know even how to track them down. I heard stories about people going into bank branches and demanding a statement so as a way to check whether or not the amount of money the company says is in the bank on a given day is in the bank. And they would get a statement that verified that there was that much money in the bank, but only later did they find out that the bank manager was in cahoots with the management to print false statements. So they had to really dig several layers deep in order to uncover some of these things, and the auditors at first just weren’t doing it well.

Ryssdal: Just to recap, what we have are in many cases completely and knowingly fraudulent Chinese companies that become listed on American exchanges. You can go to the New York Stock Exchange or the AMEX —

Ryssdal: And the Nasdaq and find these companies and buy their shares. They are U.S.-listed Chinese companies.

Ryssdal: And what you have discovered and the story you tell in this film, actually, is that a bunch of investors — and I’m not talking dozens and dozens, but a handful, relatively speaking — discover this, and in the absence of regulation, go after these companies by trying to short them, that is, bet the stock will go down and short them out of existence.

Rothstein: The bulk of the problem companies are really found out by these short sellers. Some people argue in the film that that’s the way it ought to be, that we ought to, you know, that our markets are free and open and vibrant because we don’t try to police these types of things before they are known about. I would argue that we could do better. You’re never going to root out all fraud, but you can set up the rules of the game to really discourage it and hold people accountable and, I think, thereby diminish the amount of it.

Ryssdal: Who gets hurt if there’s, you know, dozens, a couple of hundred, you know, fraudulent U.S.-listed Chinese companies?

Rothstein: Well, we all do. The vast majority of losses were in this big skim from you and me and probably everyone in this studio and everyone who has a retirement account in amounts that maybe would be hard to pick out if you weren’t paying very close attention. And then, of course, there are some people who, some of whose stories we tell in the film, who invested directly in some of these companies and really got hurt in a more substantial way. And, in fact, now the various indexes that are used to calibrate mutual funds and institutional investments include China in a more substantial way than they did at the time of this fraud. So it’s even, we’re becoming more integrated, and I think that puts an onus on us all to demand better regulations that keep pace with the integration that we’re seeing.

Ryssdal: This film is landing and getting a lot of press at an interesting time for the U.S.-Chinese economic relationship.

Rothstein: Definitely. The impending trade war is, or, you know —

Rothstein: I turn to you, Kai, I listen to you every day to tell me whether or not we’re going to be in a trade war. But the potential trade war, the dispute is not over the central issues that we talk about in “The China Hustle,” but it does go to a sort of deeper problem, which is the lack of communication between our governments about finance and between our regulatory agencies.