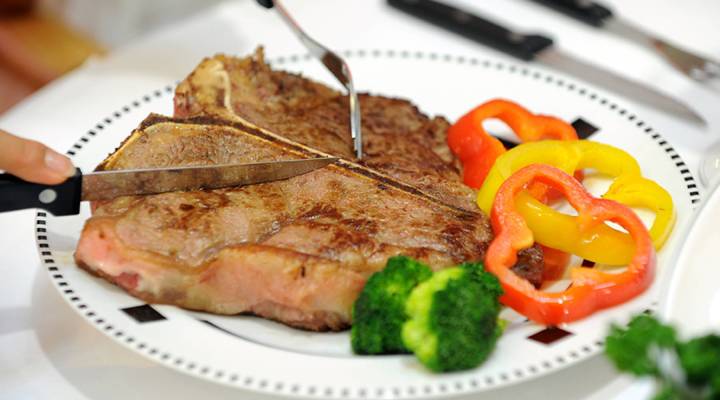 Seeking what he called “clean” food, Alexander Minnelli chose ProteinHouse, one of the newer restaurants on Kansas City’s Main Street, one recent day for lunch.

The bodybuilder ordered a Greek Bowl, which was topped with a “natural” turkey burger, produced without antibiotics.

“It’s a turkey burger with brown rice, some low-fat feta cheese, like a salad, but it’s a Mediterranean salad because … there’s olives,” he said.

Healthy eaters like Minnelli are helping drive what the U.S. Agriculture Department said will be a record year for meat consumption. The USDA estimates that each one of us, on average, will consume more than 222 pounds of beef, pork, chicken or turkey.

“We are a nation of protein eaters,” said David Portalatin, a food industry analyst with NPD Group, a global firm that tracks consumer behavior.

Some 56 percent of consumers named protein as the top nutrient they are looking to add to their diet, Portalatin said. Most consumers aren’t going with one fad diet, but rather sticking to some version of a diet that calls for low carbohydrates, he said.

“There’s several (low-carb diets) people may be borrowing bits and pieces from,” he said, “but ultimately what the consumer is saying is: ‘I’m going to do what works for me.’”

Joe Kelly is one of the owners of ProteinHouse, part of a Las Vegas-based chain that is planning to open more restaurants in Kansas, Iowa and Nebraska.

Despite the rise in interest in plant-based or lab-grown protein, Portalatin says actual consumption is very low compared to demand for beef, pork, chicken and turkey.

NPD’s research shows that when consumers say they are seeking protein, it’s typically animal protein, though they now talk about wanting it “clean,” such as grass-fed, cage-free, or free-range. The other rise in protein consumption is eggs and what people consider as dairy — plant-based products like almond milk or coconut milk, Portalatin said.

But the high rate of consumption is also being driven by more traditional fare and by meat showing up in unexpected places, said David Sprinkle, researcher director at Packaged Facts, which studies the food and beverage industries.

“There is a real celebration of meat of all types,” Sprinkle said. “We’ve seen that with the pork craze, pulled pork sandwiches, the bacon craze, we’re seeing bacon in our candy bars.”

The other trends are big-calorie dishes like gourmet burgers, fried chicken and charcuterie.

Another driver of all this meat eating is the record high U.S. supply of red meat and chicken, thanks to a grain glut, so prices at the grocery store are low.

Joe Kelly, one of ProteinHouse’s owner, said he became interested in the Las Vegas-based chain because he saw people move away from fast-food places that serve mostly carbs, like bread and fries, and start eating more lean proteins in a fast-casual setting. That’s even though those carbs are cheaper.

“They got away with that for a long time, because carbohydrates fill you up and they get monetized quickly that way,” Kelly said. “So now, when everything evens out, the protein consumption will go up and food costs will go up a little bit for what you buy but that’s just because meat’s more expensive than carbs.”

Whether all this meat eating will actually translate to better health is another matter. The USDA recommends that adults eat five to six ounces of protein daily. But it also forecasts the we’ll consume double that every single day this year.

This story originally ran on KCUR.