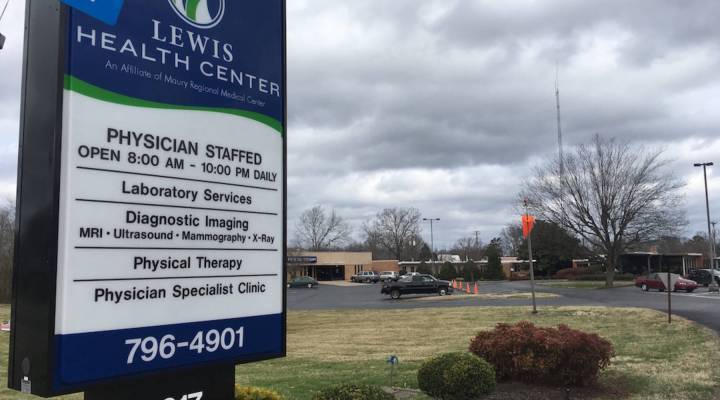 COPY
A sign lets Lewis County residents know the hours and offerings. Another sign on the building instructs patients to call 911 if the facility is closed for the night.  Blake Farmer/ for Marketplace

A sign lets Lewis County residents know the hours and offerings. Another sign on the building instructs patients to call 911 if the facility is closed for the night.  Blake Farmer/ for Marketplace
Listen Now

Rural hospitals in Tennessee have been some of the most stressed in the country. Eight communities are getting used to life after losing their only hospital, and more facilities are teetering. So health officials are exploring options and pointing to the town of Hohenwald, which has made do without a hospital for two decades.

But when you live in Hohenwald or near it and have an emergency, things can get tricky. Having to drive 45 minutes to the nearest emergency room doesn’t sound so bad until a rattlesnake sinks its fangs into you, says William Self, a lifelong resident of Lewis County. When that happened to him, he says it took hours to get treated with anti-venom. In that time, his hand swelled up so much that it turned black and cut off his circulation. Doctors at Maury Regional Medical Center in Columbia, a county over, had to make a cut from his palm nearly to his elbow.

“They split it down there to relieve the pressure,” Self said, noting that the incision damaged his muscle.”I can’t bend my fingers. I can’t grip like I used to.”

Self figures his hand would be in better shape if it hadn’t taken so long to get help. And that delay is largely because Hohenwald’s hospital closed in 1996. In a county of just 12,000 with so many people uninsured, the private owners didn’t see a way to make money.

“It does hurt in recruiting industry and recruiting people in, because we don’t have a 24-hour medical facility,” he said.

Webb would still welcome anyone who would provide hospital services but admits it’s unlikely round-the-clock service will ever return.

The old hospital building languished for a time and has now become something shy of a hospital but more than a clinic. On a recent morning, William Self drove his wife, Joyce, to an appointment for her irregular heartbeat.

“They have x-rays. I’ve had IV done here. I’ve had breathing treatments,” she said. “I’d like to have a hospital. But I’m thankful we have this.”

At the Lewis Health Center, patients can be seen as late as 10 p.m. And some have stayed most of a day for observation. If a patient needs more attention, an ambulance is parked out back, ready to whisk them to a higher level of care.

It’s a novel concept that has attracted the attention of Congress as rural communities prop up struggling hospitals.

Alexander chairs the Senate Health Committee, but this is a backyard issue for him. His home state has had more hospitals close than anywhere but Texas. Both states opted not to expand Medicaid, which would have provided more paying customers to rural hospitals. So Alexander is looking for the next best thing and suggests Hohenwald could become a model.

This facility only works because Maury Regional Medical Center, which is owned by the neighboring county, has taken over and qualified for some federal grant money to offset its losses.

“Does it have an emergency room? No. Does it have surgical capabilities? No. But for this size community, I think this is a good model, and I do think it can be replicated in other communities,” Maury Regional CEO Alan Watson said.

Watson is looking for some regulatory help. During Alexander’s visit, he asked if the federal government might consider new designations for a hybrid health center, so he could charge patients for services a hospital might perform that most clinics don’t offer.

Already, the Tennessee Hospital Association is working with facilities on the verge of closure and encouraging them to consider a similar transition to primary care before they’re faced with shutting down altogether.