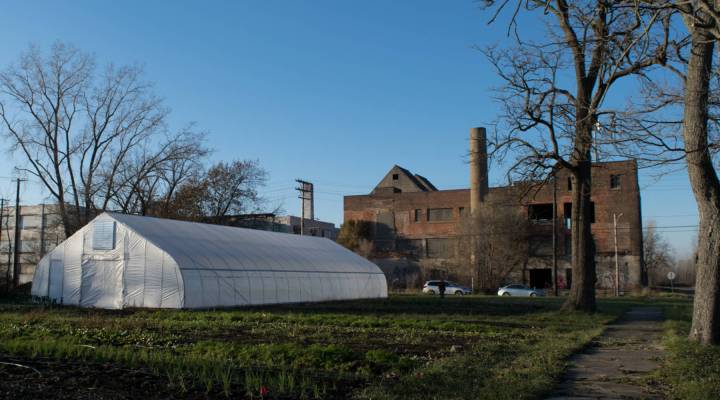 A few miles from the heart of Detroit’s downtown, sandwiched between diverging freeways is a sort of microcosm of the city: a factory, a boarded-up warehouse, and a handful of homes surrounded by the kind of sprawling yards usually associated with the suburbs.

On the front porch of her white farm-style house, Gloria Duncans-Kidd is petting one of the neighborhood’s many stray cats. She bought the house off the auction block in 2007 for $3,000. Back then, it overlooked a huge vacant lot across the street. For a long time she worried about who might buy the lot, and what that might mean for her neighborhood.

“We didn’t want condominiums over there, because we felt like we wanted something quiet over there that we could trust,” she says. “You know how they can change it real quick.”

Gloria Duncans-Kidd stands on the porch of her Detroit home.

But after a decade of worrying, Duncans-Kidd is excited about her new neighbors.

Clad in a straw hat, Ryan Anderson is giving his family a tour of his new farm. He and his business partner Hannah Clark purchased about an acre of space and farming equipment with the help of a $75,000 loan. They want to expand, buying up land spanning the length of two city blocks towards the highway.

For now, the farm is modest: about 20 rows of produce, a small tractor, and a tent-like structure called a hoop house.

“We’ve got some salad turnips and Asian greens, and carrots and beets at the far end,” Anderson said.

Anderson and Clark sell their produce to a few higher-end restaurants in the city. Their farm is for-profit, and restaurant sales are their main source of income.

They’re part of the local food movement sweeping Detroit and the nation. A United States Department of Agriculture report says that local food sales are increasing, and more farmers are participating in local food systems.

“There’s so much demand that I’m not really worried about not having somewhere to sell things. It’s much more scaling up our production to satisfy even just the restaurants that we work with,” Anderson said. “Which is great because then it makes a big community, all of the farmers in the city can support each other because we don’t have to compete for making sales.”

Anderson and Clark both moved to Detroit because they wanted to farm in a city, and Detroit is uniquely suited for urban agriculture.

A movement for food sovereignty

In terms of land, Detroit is huge: San Francisco, Boston, and Manhattan could fit within the city’s borders. And a portion of that land is vacant. Experts can’t agree on the exact amount, but the estimate runs anywhere from 27 to 40 square miles. That’s at least the size of Manhattan, if not bigger. That space could be ripe for growing, for a pretty reasonable price.

Detroit is already home to many gardens and farms, and one group in the city estimates there are more than 1,500 from individual, community, and school gardens to larger-scale farms.

A map of many of the farms and gardens inside the city of Detroit.

The city has a long history of urban farming, stemming as far back as the 1890s when Mayor Hazen Pingree encouraged residents to plant potato patches on vacant land. But for those who are new to the city and new to farming in it, Detroit can be a really complicated place to navigate.

“If you’re not aware of context in which you’re operating, if you’re not aware of the social and political dynamics, if you’re not aware of the last 50 years of struggle for black empowerment in the city of Detroit, and you just fall down out of wherever you came from and you plop in here and you say, ‘Well, I’m here, and I’m going to do farming,’ then you’re likely going to move in a way which is not going to be supportive of community goals and aspirations, and perhaps could even undermine those,” said Malik Yakini, the executive director of the Detroit Black Community Food Security Network, and a native of Detroit.

Yakini is the founder of D-Town Farm, a 7-acre, nonprofit farm in Detroit’s Rouge Park.

“There’s different models of urban ag in the city of Detroit, and we’re definitely rooted in the social justice, racial justice, economic justice camp. We’re not doing this for profit. And so building a sense of community and advancing certain principles and values is the core of our work, and perhaps that’s even more important than how many tons of food that we grow,” Yakini said.

Detroit is in Wayne County, which is the most food-insecure county in Michigan. That means that many households have uncertain access to adequate food. More than 35 percent of the city’s residents are living below the poverty line.

Many of the farms that have been in the city for a long time, like D-Town, place a lot of importance on social justice and something they call “food sovereignty,” defined as the right to healthy and culturally appropriate food produced through ecologically sound and sustainable methods, and the people’s right to define their own food and agriculture systems.

“We’re hoping that the main seeds that we’re planting are not the squash seeds or carrot seeds or tomato seeds, but the seeds in people’s consciousness so that they see we have the ability and also the responsibility of providing as much food for ourselves as we can, and controlling the way in which that food is grown, and making sure that the profits from that food is circulated within our community as opposed to being extracted,” Yakini said.

D-Town has events every month to engage residents in farming and cooking techniques. The group is planning on opening The Detroit Food Commons, a co-op grocery store equipped with a teaching kitchen and lecture space.

“I’m happy about the fact that we have established a model that people across the world seem to think has some value in terms of demonstrating community self determination,” Yakini said. “So this isn’t just something we’re talking about. People can actually come out here and see massive amounts of food being grown and see it being grown by a black-led organization and by primarily black people who are out here working. And that’s a rarity. In America, it’s certainly a rarity.”

In the rest of the country, farming is more than 90 percent white. Detroit is a city that is 80 percent black, according to the 2016 census.

A magnet for development

Ryan Anderson and Hannah Clark, the new for-profit farmers, are aware of Detroit’s history and say they were expecting some conflict. Their goal is to eventually be able to contribute to the social justice efforts in the farming community, but first they say they have to make a profit.

Hannah Clark and Ryan Anderson inside their hoop house.

“Selling to restaurants allows us to both create a financially sustainable business and provide healthful hyperlocal food to our neighbors. It kind of subsidizes that ability,” Clark said.

A lot of people and developers are eyeing Detroit as a business opportunity, and urban farms could make neighborhoods more attractive for gentrification in the long run.

“Part of the reason I started thinking about maybe I should buy land outside the city was that, yeah, I didn’t want to contribute to completely upheaving a neighborhood and displacing people. If that’s indeed what’s happening. I don’t really want to be the spearhead that drives into the neighborhood,” Jones said.

Intentions matter, he said. These urban farms add a lot to their neighborhoods, but they may become magnets for development. That makes him wonder if the farmers who saw the city as a financial opportunity will have more incentive to sell than to stay if they get offers from developers.

This article originally ran on WHYY’s The Pulse and Michigan Radio.