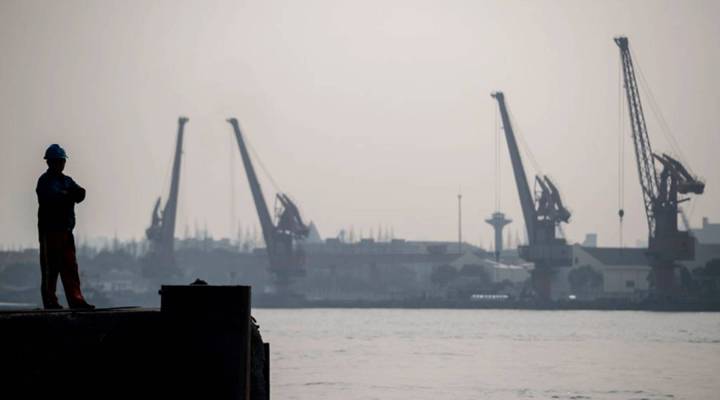 COPY
President Donald Trump has announced tariffs on as much as $60 billion worth of Chinese products. Above, a worker stands on a dock in Shanghai. JOHANNES EISELE/AFP/Getty Images
Trade showdown

President Donald Trump has announced tariffs on as much as $60 billion worth of Chinese products. Above, a worker stands on a dock in Shanghai. JOHANNES EISELE/AFP/Getty Images
Listen Now

China said it does not want a trade war, but it’s not afraid of one either.

After President Donald Trump announced tariffs on as much as $60 billion worth of Chinese products on Thursday, China’s Ministry of Commerce said the United States’ unilateral action set a “very bad precedent.”

Despite the tough talk, China’s actions in response have been modest. If the U.S. goes ahead with the tariffs, China’s Ministry of Commerce has issued a list of 128 American products it could target for retaliation, including pork, wine and fresh fruit. These U.S. goods had an import value of $3 billion in 2017, which is only a fraction of the value of the Chinese products on which the Trump administration plans to impose levies.

A day before Trump ordered the tariffs, China extended an anti-dumping tax on photographic paper from the United States, European Union and Japan for another five years.

The United States has justified its tariffs by accusing China of forcing American firms to transfer technology if they want to access China’s markets. Chinese officials appeared to dangle some carrots to address this concern.

“We will also fully open up our manufacturing sector. There will be no mandatory requirement for technology transfer, and intellectual property rights will be better protected,” Li said.

The comment was welcomed by Jake Parker, vice president of China operations at the U.S.-China Business Council. He added, however, that the announcement was just government “rhetoric” until China removes its other barriers to American businesses.

U.S. firms complain that China uses a variety of tools to force them to transfer technology, including foreign equity restrictions, joint venture requirements and the domestic licensing and product approval system.

“Before a company can begin the construction of a new manufacturing facility, there’s a requirement that the plans undergo an environmental impact assessment,” Parker said.

He said companies have given information considered trade secrets during the process. Afterward, the results would be reviewed by a local expert panel.

“We’ve heard from members that those experts can sometimes be competitors from industry, state-owned-enterprise executives or academic institutions which work with their competitors. So these individuals are gaining access to very sensitive information and trade secrets,” he said.

While companies would not reveal whether their trade secrets were leaked this way, Parker said there is currently no requirement for this information to be destroyed after the assessment.

The Trump Organization and Michael Jordan have successfully sued for trademark infringement in China, but some of those victories were partial and were preceded by several losses.

“Yet in this very short time span, I think China has made some good progress. Of course, there are still some areas to improve on,” he said.

China’s government suggests there is a simpler way for the United States to balance its trade deficit with China. Officials here called on the U.S. government to stop blocking exports of American high-tech goods to the country.