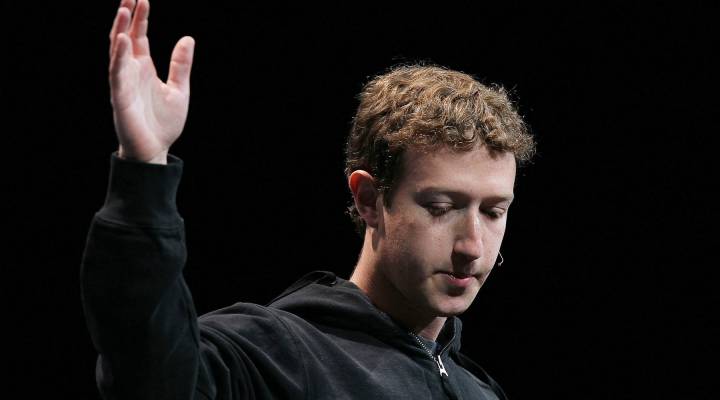 Two U.S. senators are asking the powerful Senate Judiciary Committee to get Facebook CEO Mark Zuckerberg to testify before Congress. They want Zuckerberg to explain how Facebook handles personal information and how it let the political data firm Cambridge Analytica harvest detailed information on 50 million Facebook users without their permission. The last time Facebook was asked to appear before Congress, Zuckerberg and Facebook Chief Operating Officer Sheryl Sandberg sent their legal team instead. Marketplace Tech host Molly Wood spoke with Republican Sen. John Kennedy of Louisiana, one of the senators who penned a letter asking Zuckerberg to testify, about what he’d like to hear from Facebook. The following is an edited transcript of their conversation.

Molly Wood: So sir, you’re a member of the Judiciary Committee. You wrote this letter asking Facebook CEO Mark Zuckerberg to come and testify before that committee. What do you want to hear from him?

John Kennedy: Well, let me say first, I think Facebook is a wonderful American company and they do many good things. They let us bring the world closer in some respects and allow us to to exercise our First Amendment rights. They played a pivotal role in the Arab Spring in the Middle East, where people could communicate with each other, but their power sometimes scares me. I mean, let’s face it, Facebook is no longer a company, it’s a country. And some of the problems presented by a company with that much of the new oil, data, need to be answered. And I would like Mr. Zuckerberg to come to the Judiciary and testify in front of God and country and answer some questions. We’ll talk about them together. To what extent, if any, do those of us who use Facebook see a contrived world created by Facebook algorithms? I mean, sometimes I feel like Truman in “The Truman Show,” the movie. No. 2, has Facebook been a good steward of our data? There have been some news reports indicating otherwise. And I’d like to to hear what Mr. Zuckerberg’s thoughts are on it. No. 3, I’d like to talk about the bargain that we, as consumers, have made with Facebook, and we know what we get, we get free access to the Facebook site. I’d like to understand more precisely what Facebook gets. And I guess the largest issue is how do we preserve the good things about Facebook, and there are many good things, while at the same time combating the corrosive effects of Facebook? I think the only rational way to approach answering that question is to invite Mr. Zuckerberg and the other CEOs of the social media platforms to converse and let us talk about it. I mean, at this point, based on the first hearing to which Mr. Zuckerberg and the other CEOs sent their lawyers, who did a lot of bobbing and weaving and dodging and stalling and restalling and didn’t really answer forthrightly, based on that hearing it appears that Facebook is trying to manage Congress with a mushroom form of management. You know, keep us in the dark and feed us manure. And I don’t believe in the mushroom form of management.

Wood: You know this is certainly not the first time — although it is getting more intense every time — that Facebook has faced these criticisms or been careless with its users data. I mean, what could he say that would make you feel like the company is taking this seriously?

Kennedy: I don’t know. I mean, I’m not trying to be flip. If I knew what he was going to say, I may not need him. I’d like him to just talk about these issues. They’re bigger than Cambridge Analytica, though Cambridge Analytica is clearly a part. I’d like us to be able to talk about these issues. Talking about what, if anything, we need to do to address these issues particularly, including dealing with the preservation of the sanctity of people’s data. I just see it as a first step of saying, “OK, we may have a problem here. Let’s examine it from all sides, and let’s talk about what, if anything, we ought to do about it.” I don’t think the issues are going away. They shouldn’t. They’re not really Republican or Democratic issues. I mean, yeah, Cambridge Analytica worked for President Trump. But President Obama’s very able campaign team, when he first ran for president, were pioneers in mining data from Facebook. I’m not saying anybody did anything illegal or wrong. I don’t know. I just clearly see the potential for us to have some real problems here. And indeed, we already have problems. We know Russia tried to influence our election, at least in part, through Facebook.

Wood: Are are you planning to call for more? I mean, I think consumers feel like we are way past the point of maybe having a problem. And certainly the European Union is about to enact some of the strongest privacy laws we’ve ever seen. Your party is in the majority. You know, you have a lot of power to create new regulations over these companies that include Facebook, but also Equifax or Yahoo or anybody who is careless in the way that they store consumer data. Do you think that that is a possibility? That some kind of regulation of these companies could happen?

Kennedy: Well let me say first, I have a lot of respect for the EU, but I wouldn’t hold them up as a model of regulatory ballot. European culture is different from American culture, so I wouldn’t pattern anything after the EU. Doesn’t mean I wouldn’t pay attention to what the EU’s doing and try to learn from it. But, I think America needs to take a little different approach. I suspect that’s what we’ll find out. I’m not looking to regulate anybody to death, but I would like Facebook’s input, and the input of the other CEOs, on how to solve this problem if they care to participate. Now if they don’t care to participate, I don’t think this issue is going away. So to answer your question, yeah I think there’s a realistic possibility. I’m not going to call it a probability because we don’t have anything on the table, but there’s a recent realistic possibility that Congress will act and we may get it wrong. I mean, we may get it right as well, but I think we’ve got a better chance of getting it right if we sit down with the people who know these companies best. That would of course be their CEOs. If they want to just send their lawyers again, I can tell them how to save some money. Don’t send your lawyers. I’m not saying their lawyers don’t do their job. They do their job too well. They just aren’t very forthcoming.

Wood: How political is this issue? You mentioned that, but do you think that there’s a possibility that this conversation about data and privacy, which ultimately, I think, is how a lot of consumers see it, could get derailed by the politics, the Cambridge Analytica aspect, the “who did what kind of targeted advertising”?

Kennedy: It’s not political to me, in the sense — people have been coming to politicians for a long time now saying, “I can win your election for you on the internet.” Well, hey, I don’t begrudge anybody, any political consultant, the opportunity to earn a living. But unless you are a rock, only dumber, you know that one approach doesn’t alone automatically guarantee you’re going to win an election. There’s no way to tell why you won an election. There’s just not. And sometimes a presence on the internet helps, sometimes it doesn’t. It depends on how you use it. TV matters, groundwork matters, it’s complicated. I don’t consider this a political issue. Yeah, Cambridge Analytica worked for President Trump. But President Obama’s campaign was the pioneer in trying to influence human behavior through Facebook. Nothing wrong or illegal about that if it’s done fairly and correctly. I just think we need to learn more about it. I do. Sometimes I feel when I’m on Facebook like I am Truman in the movie “The Truman Show.” That this is all contrived. I’m only seeing what somebody out there, who I’m sure is well-intentioned, thinks I ought to see. I think more and more, Americans are feeling uncomfortable with that. I mean, as I said yesterday, it’s kind of creepy. You kind of get into the foothills of creepy. And I really think we do need to sit down and talk about it. I don’t see it as a Republican issue or as a Democratic issue. I really don’t. I don’t see it as a comment on President Trump’s campaign in any form or fashion. I just see it as a privacy issue. Here we have these really successful American companies that talk about bringing us together and bringing us closer, and in many respects they do, but sometimes they drive us apart, and we need to talk about it.

Wood: The Judiciary Committee also heard from the CEO of Equifax in October about its giant data breach. You’ve made a bipartisan call for Mark Zuckerberg to come before the committee. Could you imagine a scenario in which you craft some legislation around requiring companies to report data breaches or how they treat our data?

Kennedy: Can I imagine that? Sure, I can imagine it.

Wood: Would you do it?

Kennedy: I really think the first step to regulation is — and we may not end up doing any regulation — but the step one to all this is saying, “Hey, we’ve got a problem here, or a potential problem anyway, and you guys and gals know your companies, you built them. Let’s sit down and talk about it. Maybe you’ve already got it solved. I don’t know. But don’t try to manage us.” I think everybody’s in good faith. I mean, I’m not looking to regulate anybody out of business. We may not need to regulate at all or we may need to regulate, but this problem is not going away. It’s there, it needs to be addressed. And if I were running Facebook, or one of the other social media platforms, and I’m not and I don’t aspire to be, I’d say, “You know what? I’m better off being at the table.” Because sometimes if you’re not at the table, you end up being the meal.