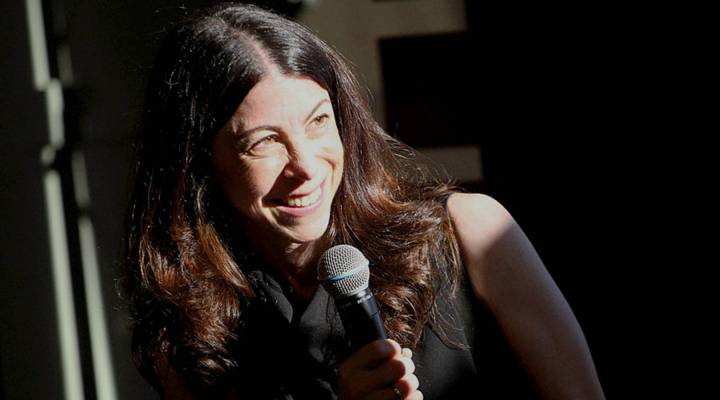 COPY
Nell Scovell says that when comedian Garry Shandling said she wrote like a guy, she took it as a compliment. Tommaso Boddi/Getty Images for Vanity Fair
Shelf Life

Nell Scovell says that when comedian Garry Shandling said she wrote like a guy, she took it as a compliment. Tommaso Boddi/Getty Images for Vanity Fair
Listen Now

According to the latest Women and Hollywood study, just 28 percent of all the program creators, directors, writers, producers, executive producers, editors and directors of photography in TV last year were women. Nell Scovell is a television writer, producer and director. Her long list of behind-the-scenes credits includes “The Simpsons,” “Sabrina the Teenage Witch,” “Newhart” and co-authoring “Lean In” with Facebook Chief Operating Officer Sheryl Sandberg. She talked with Marketplace host Kai Ryssdal about her new book, “Just the Funny Parts … and a Few Hard Truths About Sneaking into the Hollywood Boys’ Club.” The following is an edited transcript of their conversation.

Kai Ryssdal: As I was reading this book, I started to count the number of times you talked about being the only woman in a writers’ room. But honestly I lost count. It’s kind of staggering.

Nell Scovell: Yeah, I was not only just the only woman in the room, but often ignored to the point where I would have to go ask the other women in the office, “Am I corporeal? Can you see and hear me?”

Ryssdal: Do you think though that we have arrived now — Hollywood specific, since that’s that’s your base of operations — have we arrived at a moment where the entertainment and pop culture industry in this country is not just aware of the problem but actually has an active desire to fix it?

Scovell: Well, Frances McDormand nailed it at the Oscars saying two words: inclusion rider. And what’s so wonderful about the inclusion rider is it goes beyond lip service. You know, a lot of people claim it’s a pipeline problem. I don’t see it that way. I call it a broken doorbell problem because there’s just so — the talent is out there.

Ryssdal: And the women are leaning on the doorbell right? But nobody’s answering the door.

Scovell: Yeah. And people of color, too.

Ryssdal: Early on in this book, you write about somebody saying to you, “You write like a guy,” and it being a compliment.

Scovell: I wasn’t “somebody,” it was Garry Shandling!

Ryssdal: OK, not just somebody. I forgot.

Ryssdal: OK, so look, is that a compliment from him or what?

Scovell: Oh, it was absolutely a compliment from him. This was back in the ’80s, and I think there was a feeling that men wrote hard jokes and women were softer. I mean, we knew Lucille Ball was funny, and we knew Carol Burnett was funny, but it was a more gentle-character-driven kind of comedy. So, you know, I wrote jokes like, you know, Gary’s mom walks in and says, “Do you need an extra pair of hands?” And he says, “That would double my sex life.”

Ryssdal: Tell me how it came to be that you wound up working with Sheryl Sandberg on “Lean In.”

Scovell: People always ask how Sheryl and I met. I lived in L.A. She lived up north, and then they kick themselves when they hear the answer. Because we met on Facebook.

Scovell: Well kind of. She’d been asked to give a speech but needed some help just smoothing it out. She sent the notes down to me, and in the book I actually include the part of the notes that says “women need to lean in.” And it was the first time she used that phrase.

Ryssdal: It’s — all right, so I’ll be honest with you. You ready? Complete honesty.

Ryssdal: I had no idea who you were until this book crossed my desk. And that’s the set up for this question. You’ve spent a career, a long-ish career in Hollywood and in the creative writing arts being behind the scenes. Why now have you decided to become visible about this externally outside the industry, I guess?

Scovell: Right, so I’ve been making pop culture for 30 years, and I thought it would be great to pull back the curtain, and along the way I did want to talk about the experience of being the only woman in the room, not just to inspire young women but also to give men a perspective of the pressures and obstacles women face. If I were to write a sequel to “Lean In” for men I would call it “Make Room.” We need our place at the table but it would be so much easier if men would make room.

Ryssdal: Nell Scovell. The book is called “Just the Funny Parts … and a Few Hard Truths About Sneaking into the Hollywood Boys’ Club.” Nell, thanks a lot.

Scovell: Oh, thank you. You know, I almost called it “Just the Angry and Bitter Parts,” but that would have been an eight-volume set.

Ryssdal: Yeah, and it would not have sold as well.

Scovell: Oh, I think it would have sold better, actually.

Click here to read an excerpt from Scovell’s new book.