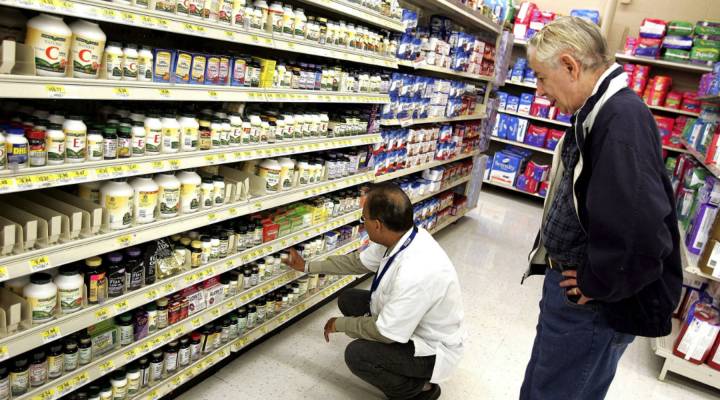 COPY
A pharmacy manager assists a shopper in the pharmacy area of a Walmart store in Mount Prospect, Illinois. Tim Boyle/Getty Images

A pharmacy manager assists a shopper in the pharmacy area of a Walmart store in Mount Prospect, Illinois. Tim Boyle/Getty Images
Listen Now

Pharmaceutical companies and insurers are slugging it out over drug coupons, and the fight is likely to affect the prices people pay for their prescriptions.

Coupons, which are used to get steep discounts, typically come in the form of cards that consumers get in drug ads or from doctors. Coupons help drug companies sell more products, but studies show coupons also raise health care costs because they encourage people to buy more expensive drugs, even when cheaper generics are available. Insurance companies, therefore, don’t think much of coupons.

“The insurers are arguing coupons allow manufacturers to raise their prices,” said Geoffrey Joyce, an economist at the University of Southern California. “Manufacturers [say] ‘We are offering coupons to make these drugs more affordable because insurance companies are making consumers pay too much of the bill.’ It’s hard to say who’s right.”

Increasingly drug coupons have fallen out of favor. The federal government, which considers them kickbacks, already prohibits their use in Medicare and Medicaid. California recently outlawed coupons for branded drugs that have generic equivalents, as did Massachusetts. New Jersey has considered a similar move.

Insurers and drug companies have fought over coupons for almost a decade, but the battles are becoming more pitched. This year UnitedHealthcare, the nation’s largest insurer, unveiled a new strategy to weaken the value of the coupons.

When a person uses a coupon card, the card’s value typically covers nearly all of the person’s share of the drug cost and the deductible. But under United’s new anti-coupon program, employers can now purchase a policy where their worker can still use the coupon, but the worker pays the deductible, potentially adding thousands in out-of-pocket costs.

“We’re trying to figure out how we can take the meaningful steps that would actually inhibit the use or the proliferation of coupons,” said Sam Ho, chief medical officer at UnitedHealthcare.

Efforts by UnitedHealthcare and the pharmacy benefit manager Express Scripts, which started changing how it processes coupons in 2015, are modest so far, with only a few thousand people enrolled.

“I think these programs are going to be extremely controversial,” said Adam Fein, a pharmaceutical industry analyst. “These programs are really a way to shift costs from the employer and the insurance company onto the manufacturer and the patient.” Fein said new programs aimed at making coupons less valuable could increase in popularity if more employers begin blaming coupons for the recent spike in spending on expensive specialty drugs.

“The more drug makers continue to fund these programs instead of lowering costs, the more likely employers may feel the need to implement this benefit design,” said Steve Miller, chief medical officer of Express Scripts.

These new anti-coupon programs, sometimes called “copay accumulators,” have certainly gotten the attention of drug makers. By shifting more costs to consumers, Express Scripts and UnitedHealth are daring drug companies to pony up more cash to cover that difference or risk losing customers.

Consumers like Juliana Keeping are caught in the middle. Keeping’s son Eli, 5, has cystic fibrosis. He’s on seven prescriptions. One is for Pertzye, a prescription that helps him absorb his food. Keeping said she’d have to pay her son’s $4,000 deductible if her insurance plan changed how coupons are used.

“We must come to a solution” to slow the rise in health care spending, she said. “A solution that’s going to financially cripple families like mine and many others is the wrong solution. Gimme a break,” she said.

It’s not clear how a copay accumulator would slow costs in cases like Eli’s where there’s no generic or branded drug alternative. Harvard health economist Leemore Dafny said the benefit would come from eradicating coupons, at which point she argues pharmaceutical companies would be forced to drop prices.

As terrible as it sounds, said Dafny, “sometimes painful actions need to be taken,” for the good of the whole society.