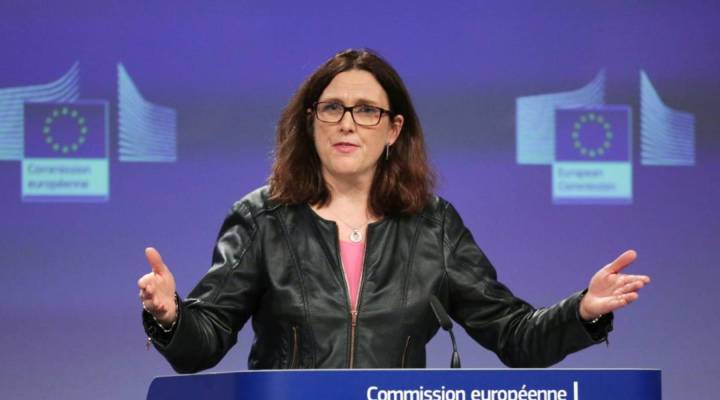 The International Monetary Fund has warned that a trade war could be triggered by President Donald Trump’s planned tariffs on imports of steel and aluminum and could trash the global economic recovery. The tariffs are due to come into effect next week. The European Union has reacted angrily to the U.S. move, threatening to slap its own tariffs on a wide range of American products.

“The American action will hurt the European Union. It will put thousands of European jobs in jeopardy. We find that deeply unjust,” Cecilia Malmström, the EU’s top trade official, told a news conference in Brussels recently. She dismissed the official justification for the tariffs that they were designed to protect America’s national security.

“We cannot see how the European Union, friends and allies in NATO, can be a threat to international security in the U.S.,” Malmström said.

Last year, the EU exported around $6.5 billion worth of steel and $1 billion worth of aluminum to the U.S., making it the second largest foreign supplier after Canada. But Canada has been exempted from the tariffs,  so, if they are imposed, the EU could take the biggest hit. And the hit extends well beyond Europe’s loss of sales to the American market.

“We’re very worried about trade deflection: exports shut out of the U.S. market ending up in Europe,” said Charles de Lusignan of the European Steel Association. “For example, Brazil and Turkey are both large exporters to the U.S.  They’ll just turn their boats around and head straight to the EU. Trade deflection could have a much, much larger effect on the industry than the loss of exports itself,” he said.

The EU is fighting back by threatening to slap its own 25 percent tariff on imports of a wide range of American goods, including iconic products like blue jeans, bourbon and Harley-Davidson motorbikes.

Analysts say that European trade officials are targeting Americana in order to drive their message home to the American people — and their politicians. Harley-Davidson is based in Wisconsin, home state of House Speaker, Republican Paul Ryan.

In all, American exports worth some $3.5 billion could be affected by the tariffs threatened by the Europeans.

“They are hoping that by making these threats they can get some sort of negotiated agreement with President Trump’s administration to not include the European Union in this large import tariff,” Meredith Crowley, a trade expert at Cambridge University said.

The EU would much rather Trump did not impose his steel tariffs at all because of the problem of trade deflection and the possible impact on the whole global trading system. The EU claims that the steel tariffs are not about national security but protectionism, pure and simple, and that is undermining the World Trade Organization, which enforces global trading rules.

But some trade experts say that the EU’s planned retaliation flouts WTO rules and has already provoked President Trump into threatening a tit-for-tat 25 percent tariff on European car exports into the U.S.

Financial markets remain calm. A full-blown trade war seems unlikely. But if one did break out — between the world’s two biggest trading partners — it would, in the words of the International Monetary Fund, be “unwinnable.” Everyone would lose. 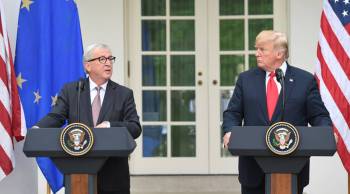