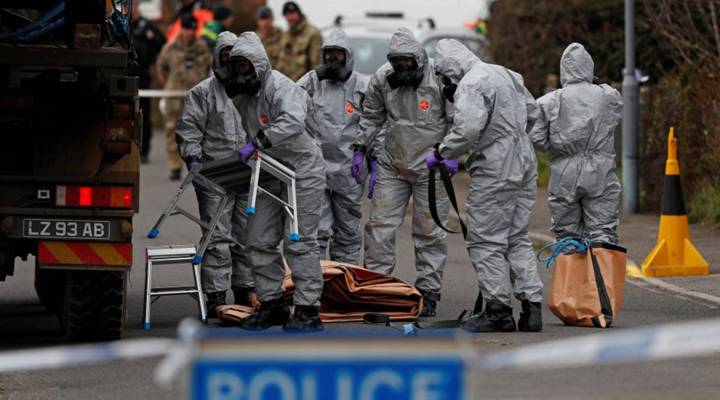 The White House has issued a joint statement along with the leaders of Germany, France and Britain condemning the nerve agent attack on British soil. The statement deplored the first offensive use of a nerve agent in Europe since the Second World War. And it endorsed the British government’s charge that Russia was responsible. The Kremlin denies any involvement in the attack which has left a former Russian double agent and his daughter in critical condition in a British hospital. In retaliation, the U.K. government has expelled 23 Russian diplomats and launched a package of punitive financial measures and restrictions on the flow of people and goods coming into Britain from Russia.

“We will increase checks on private flights, customs and freight. We will freeze Russian state assets wherever we have evidence that they may be used to threaten the life or property of U.K. nationals or residents,” Prime Minister Theresa May told the U.K. parliament, promising to introduce a British version of the U.S. Magnitsky Act, freezing the assets of individual Russians implicated in human rights abuses and denying them visas.

“There is no place for these people or their money in our country,” May said.

The Prime Minster’s words were a welcome but belated stand as far as some observers are concerned. Anne Applebaum – a Pulitzer prize winning expert on Russia – is a longstanding critic of Britain’s tolerance of Russian President Vladimir Putin’s cronies.

“Russians keep their money, their wives, their children, their property in this country and in Western Europe. Ending the money laundering that Russia does through here, enforcing our own laws, all that could make an enormous difference,” Applebaum said.

Critics say Britain has been shameless in courting Russian cash. The London Stock Exchange recently accepted a share listing from Oleg Deripaska, an oligarch close to Putin, and some of the proceeds from the share sale following the listing went to a Russian bank subject to sanctions. British intermediaries have made millions out of deals like this.

Former Polish Foreign Minister Radek Sikorski thinks such financial links may have been a factor in the decision to authorize the nerve agent attack.

“I think President Putin is wagering that Britain is so hooked on Russian money in London that the response will be muted,” Sikorski said.

The British government is adamant that its response will not be muted and that there will be a crackdown on Putin’s associates enjoying their ill-gotten gains in London.

“We have allowed the City of London’s reputation as a center for world finance to be exploited by some pretty nasty individuals who’ve used illicit money here: to clean it, harbor it, move it around or invest it,” said Security Minister Ben Wallace.

But where should Britain draw the line and how should it decide which wealthy Russians should be allowed to access the luxuries of London? Russians with close links to Putin have invested heavily in the UK. Roman Abramovich, for example, owns one of Britain’s top soccer clubs, Chelsea, and Alisher Usmanov holds 30 percent of another club, Arsenal.

Russian money is embedded in Britain. And vice versa.

The giant U.K. oil company, BP, has a huge stake in Russia, deriving a third of its global production from there. That stake could be in jeopardy if tit-for–tat measures between the two countries escalate.

This crisis comes at a difficult time for Britain’s financiers. Thanks to Brexit and the possible loss of access to the European Union, British money men and women are eager to keep their markets wide open to the rest of the world. Shutting up shop, even to dodgy Russians, won’t be popular in Britain’s financial sector.