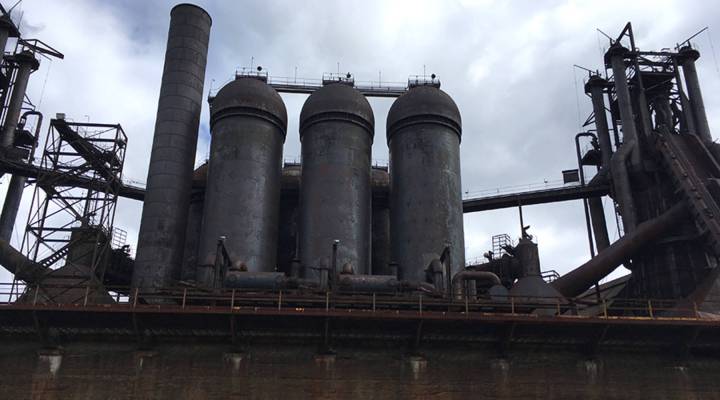 COPY
The Carrie Furnace, a blast furnace that has been closed for nearly 40 years, is now a national landmark and is visited by tourists interested in learning Pittsburgh's history. Erika Beras/Marketplace

The Carrie Furnace, a blast furnace that has been closed for nearly 40 years, is now a national landmark and is visited by tourists interested in learning Pittsburgh's history. Erika Beras/Marketplace
Listen Now

When Ed Schuty was 19, he walked into a steel mill and walked out with a job. It was 1978, and steel was still a sure thing in Pittsburgh. But within a few years, he and thousands of other workers in Southwestern Pennsylvania were scrambling for work. Schuty moved through jobs at factories and in retail. He even tended bar for a while, because steel, he said, “I didn’t think any of that was going up back up.”

Then in 2004, steel came calling and Schuty took a job at US Steel’s Edgar Thomson Works. Built in the late 1800s and still belching smoke from its hulking structure, the fully integrated steel mill is the last of its kind around here. But where the mill once employed thousands of workers, today it employs about 600. Sitting at the union hall across the street, Schuty said with the new tariffs, “Finally somebody stepping up to the plate and doing what needs to be done putting us back on a level playing field with the rest of the world.”

But the industry has been here before. In 2002, President George W. Bush enacted similar tariffs. And by the end of the next year, they were gone. One big reason: “Complaints of other manufacturers in terms of the cost of steel,” said James Craft, a business professor at the University of Pittsburgh.

Under the tariffs, which drove up the cost of steel, more people lost their jobs in industries that used steel than worked in the steel industry altogether. Craft said one reason tariffs didn’t do much is because by the time they were enforced, the industry was in no shape to compete. Technology had been moving forward for years, but the industry, said Craft, “We didn’t update ourselves in the sense of, you know, really responding to the kind of technology and the kind of opportunities we had for enhancing our competitive position. We kind of stagnated.”

And now those mills that are still standing are even further behind. Jim Johnston, a third-generation steelworker, said to boost production at this mill updates would have to be made.

“We’re hoping that US Steel is going to spend more with capital improvements here in the in the facility, which would help create jobs and make us more relevant for the future,” he said.

Johnston is also the local union president. And he was standing behind President Donald Trump in the Oval Office when he signed off on the tariffs. Even with improvements, Johnston said the mill could never employ thousands of workers again.

“Obviously with modernization you lose jobs. It doesn’t take as many people to do the work,” he said.

In Pittsburgh, the rivers were once lined with steel mills, but lots has changed since those days. Like environmental regulations, the way we move raw materials around the world and the labor force. Josh Spoores, a steel analyst with CRU Group, says mini mills are where the industry is headed and where the profit is. Tricking out one of these old mills would take years and “maybe $20 million to bring it back up and get it running again.”

And that’s not happening.

“Those mills are gone,” Spoores said. “They’ll never come back. You would need to have an environment here that requires a new mill to be built from the ground up.”

The more likely future of steel in Pittsburgh is at the Carrie Furnace, where historian Ron Baraff spends lots of time. Before shutting down years ago, the furnace produced tons of iron that was shipped across the Monongahela River to a thriving steel mill. At one time, more than 15,000 workers clocked in every day.

“You know, we often joke about having that magic switch that you can throw to turn these blast furnaces back on, but you can’t. That time is gone,” Baraff said.

Today, the furnace is a museum. The mill a shopping complex, with dozens of stores and restaurants that bring in $450 million a year. Baraff, who specializes in steel history, leads tours of the furnace for people whose relatives worked in the mills, tourists, newcomers to Pittsburgh who want to know its past.