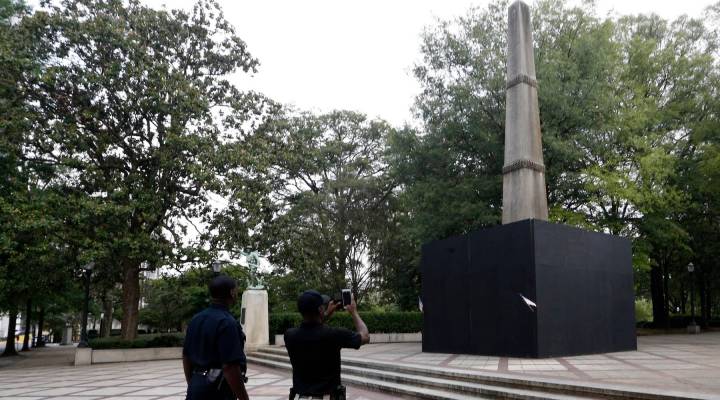 In 2017 Alabama’s Governor signed into law the Alabama Memorial Preservation Act, which makes it illegal for anyone to move or alter a monument that’s 40 years or older without the approval of a special committee. Despite the fact that violators of the new law face a hefty fine, the law is already being tested in the courts and in some communities. The law’s critics say it is clearly aimed at stopping efforts to take down or alter Confederate memorials.

Republican state Senator Gerald Allen is one of the co-sponsors of the Preservation Act. He says the motivation to pass the law was to protect all monuments in Alabama not just Confederate ones.

“Nowhere in the legislation is the word ‘Confederacy’ mentioned in the bill, nowhere and so this covers all history here in Alabama,” he said.

But some of Allen’s colleagues in the legislature, particularly members of the Black Caucus, are skeptical. “This is clearly about Confederate memorials,” said state Sen. Hank Sanders, a Democrat from Selma who added that the bill was not “thought through.”

So far no one has tried to move or change a Civil Rights monument, but some communities have started to challenge the presence of Confederate statues.

In August, days after a white supremacist rally in Charlottesville, Virginia ended in deadly violence, the Mayor of Birmingham put up a wall around the base of a Confederate monument  in a city park. Alabama Attorney General Steve Marshall responded by taking Birmingham to court and says he’s enforcing the fine of $25,000 a day for violation of the law. That fine has already reached seven figures.

Rep. Juandalynn Givan, a Democrat, represents part of Birmingham. She says the city simply covered the statue, but didn’t alter it. Givan said the law places an undue burden on communities because it forces them to keep a monument but doesn’t set aside any money for upkeep. According to Givan the legislature is saying, “‘I am going to pass a law as a legislature and tell you what you cannot do on your city property now.’ I have a problem with that.”

So at the start of the current session Givan proposed a bill that would allow municipalities to opt out of the law.

Across the state, in Huntsville, another group is raising money to get rid of a statue of Robert E. Lee, which stands on the grounds of the local courthouse.

David Odom is a member of the Tennessee Valley Progressive Alliance, which represents Huntsville and surrounding areas. He says when the law passed the group tried to raise enough money to pay the fine to remove the statue. Odom says having a Confederate statue on public property doesn’t jibe with how he sees Huntsville and it’s future, “There’s kind of a progressive nucleus to the town but it’s surrounded by a much more conservative part of the state and that’s really true in lots of places around the south,” he explained.  So far Odom’s group has raised around $1,600 through a Go Fund Me campaign.

A hearing has been set for April 13 in the lawsuit filed by the State Attorney General against the city of Birmingham for covering a confederate monument.