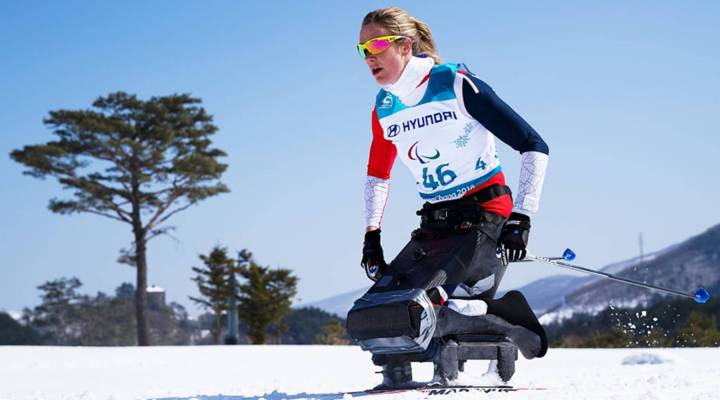 Athletes compete in events such as alpine skiing — some using a sit ski, with a seat attached to a single ski. There’s also biathlon, in which vision impaired athletes can use sound to find targets.

NBC is only broadcasting the first and last days of the Paralympics in prime time — but there are other platforms available, including the web.

Ian Brittain is a research fellow at Coventry University in the United Kingdom, where he studies disabilities and the Paralympics. He spoke with Marketplace’s Kimberly Adams about the ways technology is changing the Paralympics. The following is an edited transcript of their conversation.

Kimberly Adams:  What role does technology play in the games?

Ian Brittain:  It’s an enabling factor in that some athletes simply wouldn’t be able to take part in sport without technology. But at the same time the very cost of that technology actually makes it a barrier to competition. Obviously, the more developed nations can afford better technology and therefore tend, on the whole, to win far more medals.

Adams: Is there any effort underway to sort of level the playing field in that regard?

Brittain: Yes and no. It’s very similar to the Olympic Games. A lot of charities are available now actually provide technology to the less developed nations, but it doesn’t tend to be the really high-end technology. For instance, in Rio, the U.S. Paralympic team had their racing wheelchairs custom designed by BMW. A racing wheelchair — you’re talking $6,000, $7,000. A single, below-the-knee custom-fitted prosthetic limb for athletics, you’re probably talking $15,000.

Adams: Can you give me an example of a particular sport and how the technology used in it has changed over the years?

Brittain: Prosthetic limbs have changed dramatically. In the ’40s, ’50s, there wouldn’t have been more than a sort of a wooden prosthetic and people would have used crutches as part of the race as well, so they would be using a combination of a wooden prosthetic limb and a pair of crutches to be able to try and run down the track. Now we have these lightweight aluminum with all sorts of bells and whistles on them that cost an absolute fortune. But they’re custom made for the individual to fit the shape of the stump, to fit their running gait, etc. Part of that has been generated by the military, as well. Soldiers coming back from combat have been injured. They try to get them back to fully functioning human beings. And one way they do that is to give them the best possible lower limb technology.

Adams: How does technology used in the games translate to what’s available for non-Paralympians and everyone else after the games?

Brittain: I think it’s quite a slow process. And this is a very recent thing, given the sort of much higher profile that the Paralympic Games has now. So you’ve got the likes of NASA, who develop very lightweight durable materials. So now the very high end technology for the wheelchairs, and for the racing prosthetic limbs, is making use of that technology, and then gradually as that technology becomes more affordable, it tends to spin out into the more general population, for people with disabilities, so you get slightly lighter weight daily use wheelchairs, etc.