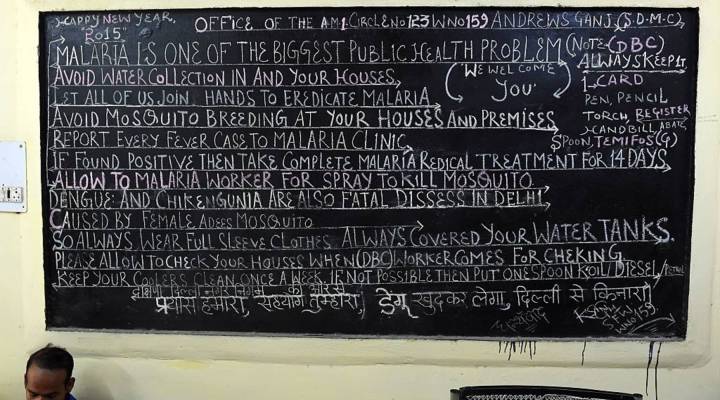 COPY
Information about malaria and dengue is written on a board at a municipal corporation office in the Indian capital New Delhi in 2015. Malaria is one issue that companies, foundations and governments are seeking to address alongside one another. MONEY SHARMA/AFP/Getty Images

Information about malaria and dengue is written on a board at a municipal corporation office in the Indian capital New Delhi in 2015. Malaria is one issue that companies, foundations and governments are seeking to address alongside one another. MONEY SHARMA/AFP/Getty Images
Listen Now

The day of the announcement, the retailer saw a more than 32,000 percent increase in mentions, retweets, comments and likes on social media compared to the day before, according to 4C insights. Yes, that’s 32 followed by three zeros. In other words, people really take notice of a company’s stance on issues.

“I try not to buy things at companies that sell guns,” said Katherine Walstrom of Sarasota, Florida.

She said she won’t shop where she doesn’t agree with a company’s stance.

Susan Wendleboe in Chatham, New York, says she actively supports businesses who get behind environmental and gun-control issues.

“If the company puts something like they’re going to support gun control, then I would shop more likely at their stores because I would like to support that movement,” Wendleboe said.

“In every city in America, you have social startups that are particularly focused on things like the environment or energy, education, homelessness,” said Bill Eggers, executive director of Deloitte’s Center for Government Insights. “Then also you have for-profit companies founded in a way that they wanted to solve societal problems.”

It comes down to a number of drivers. First up, simply, the bottom line. Companies understand that consumers and employees are both passionate about supporting causes. They want to work and support companies that are also doing so. Getting behind causes can go a long way for branding.

“Companies are realizing that they can both make money but also dive into solving these problems,” Eggers said. “It can actually help them.”

Governments across the world are creating accelerators for social entrepreneurs and startups who are working on solutions while the governments are developing regulations for the products at the same time. The accelerators are also a vehicle for startups to scale up their products to try and make an impact. In other cases, companies, governments and foundations are increasingly working alongside one another to address causes, including malaria eradication.

“You’ve actually had a number of companies putting in total hundreds of millions of dollars,” Eggers said.

But a tension exists. If companies are creating solutions in the forms of products, certain groups or segments of society could find themselves priced out of solutions they may need the most.

Eggers said that notion is at top of mind in the solution economy.

“You have a lot of these business models which are actually aimed at creating radically low-cost solutions,” Eggers said. “So that you can essentially bring more people into the marketplace.”