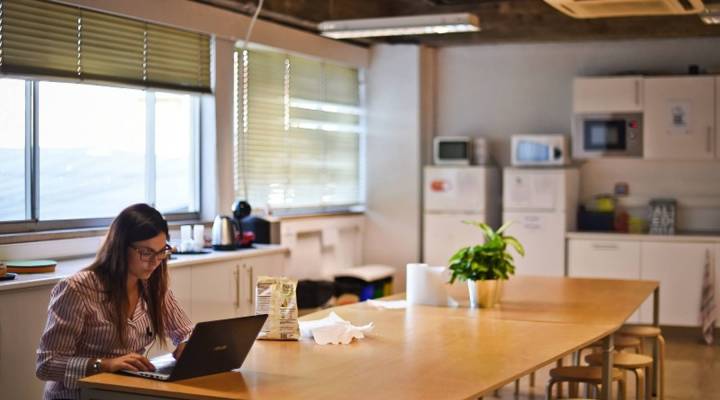 Harassment can have lasting effects on women’s career prospects — and on their earning potential.

Nilofer Merchant started her tech career in the early ’80s when Silicon Valley was even more male-dominated than it is now. Sexual harassment, Merchant said, was a constant at the high-profile companies where she worked. So she changed jobs a lot.

“It meant I didn’t get to build up the momentum that essentially a guy would be able to build up because they weren’t facing the same obstacles,” she said.

Merchant went on to become a successful consultant, author and speaker on workplace culture. Still, she wonders how things might have been different had she not felt the need to move around so much.

“My career has been shaped by most, more than any other factor, is the level of sexual harassment I faced,” Merchant said.

Over a quarter of women have experienced sexual harassment in the workplace, and of those women, 46 percent say that harassment caused them to leave jobs or switch careers, according to latest findings from the Marketplace-Edison Research Poll.

Heather McLaughlin, an assistant professor at Oklahoma State University, is a sociologist who’s studied the economic effects of sexual harassment on working women. She found that the majority who said they had experienced it on the job left their companies within two years — higher than the average.

“Many also suffered career stagnation. So their earnings really plateaued when compared to women who continued on in those same career paths,” McLaughlin said.

Even complaining can be costly. Women who do can end up without references and scrambling for income between jobs. And speaking up can be even harder for women who are paid less, said Maya Raghu, director of workplace equity at the National Women’s Law Center.

“Women are the majority of workers in low-wage jobs, and many of those women are also women of color or immigrant women,” Raghu said. “And when you are in a low-wage job, it’s much more difficult for you to take that risk to speak up and challenge sexual harassment.”

Our poll found that only 31 percent of women felt that harassment was something they could report without fear.

Economic Anxiety Index® African-Americans, women and millennials have more economic anxiety than the rest of the country
Listen READ MORE
Rep. Jackie Speier: When it comes to sexual harassment, "we need to clean up our collective act"
Listen READ MORE

Women who switch jobs tend to move into industries where there are more women, according to Leanne Meyer, executive director of the Accelerate Leadership Center at the Tepper School of Business at Carnegie Mellon University.

“The more gender balanced an environment is, the more physically safe women are,” Meyer said.

Safety, however, is becoming a bigger concern for many companies.

Elizabeth Bille, a lawyer with the Society for Human Resource Management, said as a result of all the recent attention paid to sexual harassment, “organizations are very interested in not only addressing legal sexual harassment but also those precursor behaviors are those behaviors that cause discomfort or concerns in the workplace.”

Bille’s organization represents nearly 300,000 HR professionals at hundreds of companies. According to Bille, a third of those companies have increased sexual harassment training and awareness, and another big chunk plans to do so.