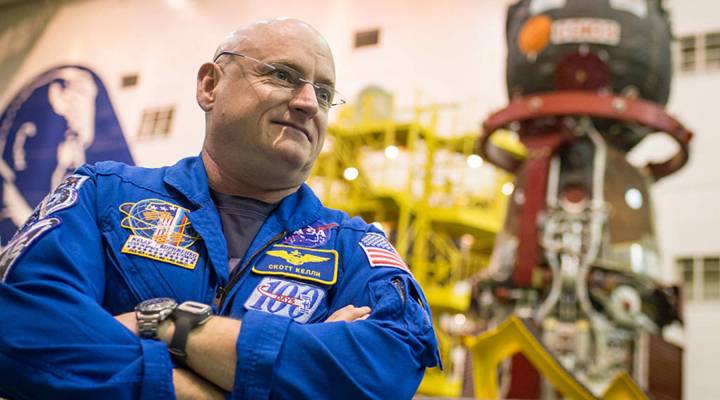 COPY
Astronaut Scott Kelly says he's proof that someone who is “far from a genius” can become a scientist. Bill Ingalls/NASA via Getty Images
Marketplace Tech Blogs

Astronaut Scott Kelly says he's proof that someone who is “far from a genius” can become a scientist. Bill Ingalls/NASA via Getty Images
Listen Now

Note: This story was first published in March 2018.

Scott Kelly came back to Earth two years ago.

After spending almost a year orbiting our planet aboard the International Space Station, the longest spaceflight by an American astronaut, Kelly returned to Earth to much admiration. And with a severe case of jelly legs. His mission was to better understand how living in space affects human physiology. Now he’s partnered with 3M to promote science awareness to the masses.

According to 3M’s State of Science Index, 38 percent of people surveyed believe that without science, their lives wouldn’t be that different. Kelly said he was shocked by that number, “because it seems to me like everything that we have is due to science.” Another surprising response in the survey? A third of respondents said that in order to have a career in science you had to be a “genius.” Kelly has his own theory and some personal experience to counter that narrative.

“Maybe it’s because the scientists that are held out as an example in our society are people like, you know, Albert Einstein and Galileo and Newton,” he said. Despite being a “bad student,” Kelly found himself working in science and says he’s proof that someone who is “far from a genius” can become a scientist.

Kelly has undergone physiological tests now that he’s back on Earth. Some surprising results have come out of a unique opportunity to study him alongside his twin brother and fellow astronaut, Mark Kelly.

“I did read in the newspaper the other day… that 7 percent of my DNA had changed permanently,” Kelly said. “And I’m reading that, I’m like, ‘Huh, well that’s weird.’”

Were potential health risks worth his time in space?

“You know, every day we walk out of our house. We’re exposing ourselves to risk … you decide the risk of driving to work is worth it because you have to get to work. My work just happened to be in space.”

But Kelly says that there are “incredible risks” confronting Earth. As the population gets closer to 9 billion, Kelly worries it will have negative impact on the environment. That’s why “we need kids in this country and around the world believing that science can solve problems that are going to exist in their future.”

Might that push humans to become a multiplanet species and hightail it to Mars when things get hairy on Earth? Kelly doesn’t buy into Mars serving as a “lifeboat” for Earth. Rather, he thinks human civilization is more likely to make Mars a manufacturing hub.

“I think Mars is a big part of our future,” Kelly said, but “it’s more for our economic existence more than physical existence, if that makes sense.”