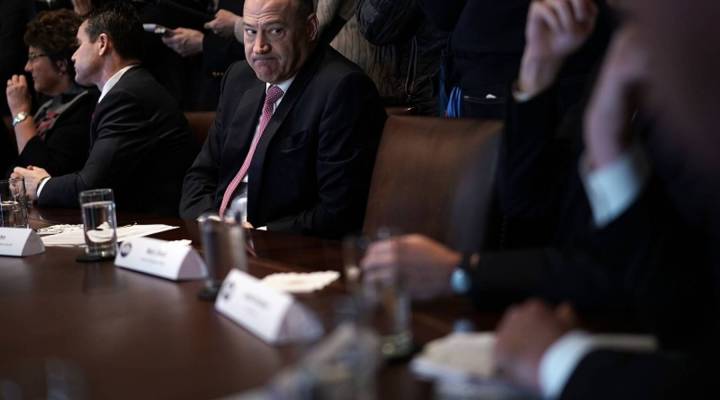 The abrupt resignation of now former White House economic adviser Gary Cohn on Tuesday led to market uncertainty and instability the following day. Cohn had opposed President Donald Trump’s decision to impose steel and aluminum tariffs last week. But despite the conflict of opinions in the Trump administration that has led to other sudden resignations, the president said he liked the environment in the White House.

“I like conflict,” the president said Tuesday during a news conference with the Swedish prime minister at the White House. “I like having two people with different points of view, and I certainly have that, and I make a decision. But I like watching it, I like seeing it and I think it’s the best way to go.”

Management through conflict is a known concept in the business world. But what’s required to facilitate and manage this conflict so that leaders can get the best outcome? Jeff Weiss, president of Lesley University and an expert in conflict management, spoke with Sabri Ben-Achour about the right and wrong types of conflict management and how this applies to the Trump administration. Below is an edited transcript of their conversation.

Sabri Ben-Achour: Is having a group around you with multiple views sort of a tried and true approach in business? I mean, Ray Dalio, he’s head of the biggest hedge fund in the world, Bridgewater, he’s famous for presiding over meetings where conflict is encouraged.

Jeff Weiss: Well, having taught leadership at West Point for over a decade, I think the best leaders have people around them that have diverse views, diverse styles, diverse perspectives. I think the grist for good decisions and the grist certainly for creativity is difference. How you manage the conflict among the people is a different question, but having different views is critically important.

Ben-Achour: Well, what is the right way to manage conflict productively and what’s the wrong way?

Weiss: Yeah, well, I think the wrong way is to have a group of people stake out their positions and try to, you know, support them with lots of data and make strong arguments about why they’re right. The leader doesn’t learn nearly as much as the alternative way and I think in the end … people end up feeling like, you know, some of prevailed and others haven’t prevailed and probably no one really feels fully understood. That is, you know, very different than to extract from each person, OK, you have a perspective. First of all, share the data and logic pattern underneath the perspectives. You have a solution, share the objectives beneath the solution and focus more on the differences of people’s objectives, people’s perceptions, people’s logic patterns, etc. Then you can use them often to come to a, you know, a better truth than any one of the individuals have as opposed to saying, “You know, I like your idea over your idea.”

Ben-Achour: So you’re saying what you want is not a personal fight over who’s right and who’s wrong, but you want more of a sharing of logic and objectives?

Weiss: I think that’s just right. Once it becomes a personal battle, not only often do you end up losing people from your team, but you’re not getting the information, the perspectives, the angles, the ideas that at a nuanced level that help you as a leader make a decision. If you created it as a true dialogue even if it’s raucous dialogue where people are sharing their logic patterns, their reasoning, their objectives, why they think something makes sense, why they think something doesn’t make sense, and you even ask people to open themselves up to challenge so that they might talk about what questions they have about their ideas, what assumptions are they making. Then you as the leader come to a much better decision.

Ben-Achour: Do you have any advice for the president on how to manage conflict in his administration?

Weiss: I think the advice that the president goes into basically three different arenas. First and foremost, I think it has to do with you want to keep a team that’s around you, than I think probably changing the dynamics make a big difference. I think the inherent catalyzing of conflict among people and having personal battles of who’s right and who’s wrong is not going to end up really for any leader with a team that stays in place over time. Secondly, I think if you want to get to the best set of answers, my advice would be probably ask different questions. I would probably not be asking the question of what’s your position paper or why you’re right? I would be asking questions about what’s your logic? What’s your reasoning? What are the objectives? Where do you think you might be wrong? What do you think you might be missing? What assumptions might you be making? Why might someone else’s idea make sense? Because I think that any leader will end up with better information that way and make better decisions themselves. And I guess the third is just to think carefully about when we send a very significant message to other leaders about how we how we interact with one another, and the president’s a model of how we do that.