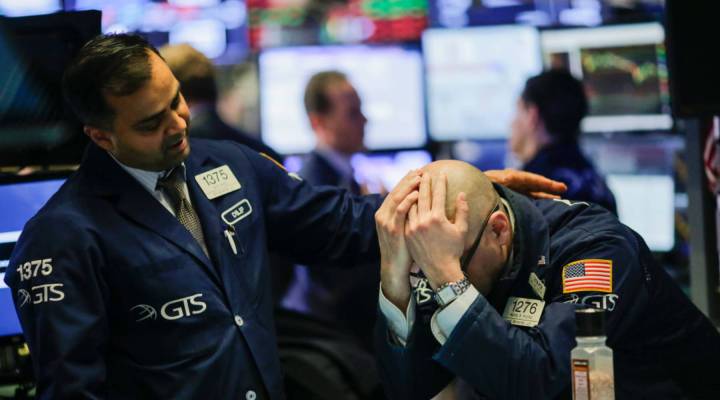 Following comments last week about tariffs on aluminum and steel from the Trump administration, European Union officials responded by saying they would implement tariffs on iconic American products like bourbon, blue jeans and Harley-Davidson motorcycles.

Over the weekend President Donald Trump suggested via Twitter that he could slap a tax on European cars sold in the U.S.

If the E.U. wants to further increase their already massive tariffs and barriers on U.S. companies doing business there, we will simply apply a Tax on their Cars which freely pour into the U.S. They make it impossible for our cars (and more) to sell there. Big trade imbalance!

Marketplace reporter Tracey Samuelson spoke with Ian Bremmer, founder of global political risk consultancy Eurasia Group, about the potential for a trade war. The following is an edited transcript of their conversation.

Tracey Samuelson: So Ian, what are you telling clients about the possibility of a trade war?

Ian Bremmer: Well, first I’m telling them that the level of follow-through and consistency from Trump, given [his] history of tweets is less than consistent. But there’s no question that this is an issue that Trump has been consistent on. He’s been looking for reasons to put tariffs more broadly against countries that the United States has deficits with. And so, absolutely, this is going to be a market negative.

Samuelson: But at the same time that we heard President Trump tweeting about these new taxes on cars from Europe, we also heard from a Trump adviser who said that while countries won’t be excluded from these tariffs, some companies could apply for an exemption. Does that ease your concern at all?

Bremmer: There were actual conversations between Trump’s trade team and the Canadians and the Mexicans last couple of weeks where they were privately told that specifically friendly countries would be excluded from these tariffs and that’s now changed. There’s enormous inconsistency. Companies aren’t the ones that decide on trade policy internationally. Countries do. So the fact that Trump or some of Trump’s team might be talking about well there are some companies that are friendly that might not get the same treatment is not really going to change the attitude we see politically from the European Union or from other countries around the world that would be negatively effected by the imposition of these tariffs.

Samuelson: What are you expecting in terms of reactions from China, from other trading partners?

Bremmer: The good news is the Chinese have expected this. I’ve sat down with Chinese officials in the past couple of months and they absolutely have been prepared for specifically these steel and aluminum measures. And the response? Chinese don’t want a trade war, it is going to be very carefully calibrated. With allies, it is more problematic because they’ve all been concerned that the Trump administration doesn’t support multilateral trade. He pulled out the Trans-Pacific Partnership. And so you have allies all over the world that have already been hedging away from the United States and moving towards both self-reliance and other countries like the Chinese who are writing checks.