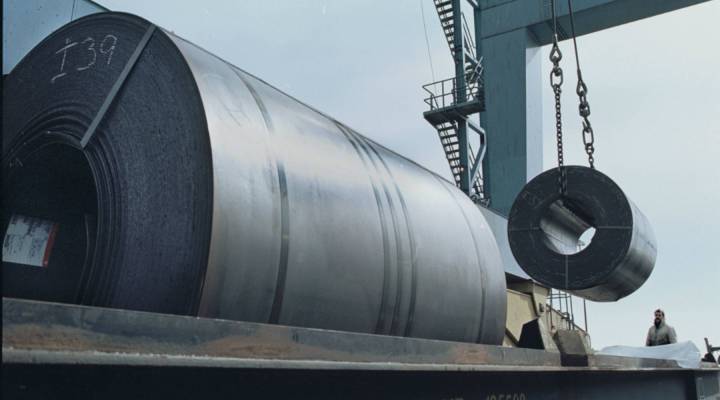 Economists are worried about the Trump administration’s recently announced plans to raise tariffs  on all imported steel by 25 percent and all imported aluminum by 10 percent. From the European Union to China, there’s already talk of retaliation, leading analysts to worry about an impending trade war which could have unpredictable effects. Tariffs could hurt profits in industries that use these metals leading to higher prices for consumers.

But steelworkers have had enough of what they say is cheating on international trade rules. Leo Gerard studied economics and by some accounts once talked about becoming an economics professor before becoming a steelworker. Gerard is the international president of the United Steelworkers Union and spoke with David Brancaccio about why countries like China that produce and distribute excess steel and aluminum need to be reigned in, but noted that the White House tariffs also need to be more specific so as to not target the countries that, in his words, “playing by the rules.”

Below is an edited transcript.

David Brancaccio: Now we’ve often noted on this program that 84,000 U.S. workers — not just in steel, but in all metal — have lost their jobs in the last decade given these trading conditions. Yet you saw steel-using industries, including the car industry, are freaking out about these tariffs. Where do you come down on this announcement?

Leo Gerard: Let me back you up a bit. Way more than 80,000 workers have lost their jobs. In fact 60,000 factories have closed since 2012, and the minor increase in price — if it happens at all — will be minimal. We checked out — we weighed a can and put it against the price of aluminum. If anything, it came out to one-tenth of a cent per can.

Brancaccio: For instance, we heard from Budweiser that that’s going to put up the price of beer, for instance, and you’re saying, not really.

Gerard: No, it’s factually not true. But let me say this: In 15 years, China went from 500 million tons of steel to 1.2 billion — billion with a “b” tons of steel. Over that period of time, there were five what they call high-level meetings to get China to play by market conditions. Now we have 500 million tons of excess steel capacity just from China floating around the world and being dumped and thrown into any place where they can get somebody to pay the cheated price. What we encourage the president to do is to bring the cheaters in line. We’re not necessarily enamored with the broad-brush approach. We think we ought to go after what we euphemistically call the “evil-doers.”

Brancaccio: In other words,  the sanctions announced yesterday cover all aluminum and steel imports from any country — not just, for instance, China. And you’d like to see that, perhaps, a little bit more targeted.

Gerard: Exactly. Part of the concern that I have is that if you give everybody the same remedy, then those that were cheating are still going to be cheated. Only their cheating will now be subsidized by having the same tariff as a non-cheater. Look, this has been our fight for 40 years. The steel industry in America went from 135 million tons 15 years ago to 85 million tons. Where did those 40 million tons disappear to? They disappeared to those countries that dump into the American market, force us to file unfair trade complaints, and when we succeed in the unfair complaint, they go and find a way to do transshipment. Someone has to ask the question. Some of these economists who are saying we can’t do anything because we’ll be in a trade war — we’re in a trade war now. We’ve had year-over-year record breaking trade deficits with China, with South Korea, with Mexico. And year-after-year of accelerated trade deficits. A trade deficit is nothing more than a wealth transfer. When you buy something from China, you’re buying it on credit, and the credit you’re getting it from China. It’s a double wham-o. People lose their jobs in America because China’s dumping, and we’re giving them our wealth to pay off our trade debts. In the last 30 years, we’d have accumulated somewhere between $7 and $10 trillion of accumulated trade deficits. So we’re talking to the president, not only about steel, but getting the trade deficit in line and demanding that our trade agreements are fair. We’re not anti-trade we’re just anti-trade with cheaters that won’t play by the rules.

Brancaccio: So that’s your answer about the danger of sparking a wider trade war: you’re saying we’re in one already.

Gerard: If you’re acquiring a $500 billion trade deficit, and as a result of taking some action, the country that’s cheating is going to have to quit cheating. If you’re not cheating, you shouldn’t be part of the problem. But if you continue to cheat, you should assume that you’re going to be penalized. Apply that to any other part of life, David, just not even about steel. Some economic idiot who continuously wants to raise we’ll be in a trade war, my question to them is: what do you think we should do about the $500 billion-a-year trade deficit with China to close the $120 billion-a-year trade deficit we have now with South Korea, where before we had balanced trade. The trade deficit that we have with Mexico, that before NAFTA was a balanced trade agenda. And so what’s happened is, global financiers, global corporations are addicted to working in industries and in sectors and with countries that cheat and don’t play by the rules. And as soon as you say they have to play by the rules, they start crying poverty. They start crying this and that. I can guarantee you this: in 2001, when we succeeded in an overall remedy in steel with President Bush, the price of steel went up few cents. The price of steel went down after. You never saw one change in the cost of a can of beer.

Brancaccio: You don’t sound like you’re in the mood to let the World Trade Organization just handle this moving forward, “stay within the rules.” You think the time is now for these tariffs imposed by the White House?

Gerard: David, we’ve been working with OECD [the Organisation for Economic Co-operation and Development], WTO [the World Trade Organization], high-level government meetings for 15 years. Over the 15 years that there’s been what is called euphemistically “high level meetings” or “high level consultations” — they happen both between the United States and China, between the United States and South Korea. And they happen at the OECD steel consultative body. During that period of time, China was over producing steel, but they were producing 500 million tons — probably a million tons more than they needed or thereabout. In each one of those consultations, China promised the American consultors that they would reduce their capacity. We reduced ours from 135 to 85. China has broken the promise every one of those five consultations. In this last year, they produced 1.23 billion tons of steel, which puts almost 5.5 to 6 million tons of steel out on the market, depressing prices and depressing capacity. And in order to stay in business, we’ve got facilities that are shut down. In Conshohocken, [Pennsylvania], we had to shut the facility down. They make the last armor plates in America. AK Steel is in desperate condition. They make the last electrical steel in America. I mean, so you go two facilities that make the last of that product. So we’re going to have to do what — ask India to send it to us, ask Russia to send it to us, ask China sends it to us if we need it. And so we’re really just saying that we’ll support playing by the rules. But none of them are playing by the rules.