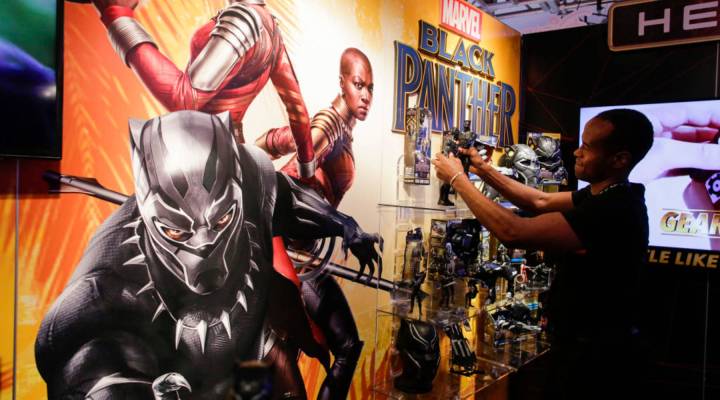 COPY
An exhibitor organizes 'Black Panther' items at the Hasbro showroom during the annual New York Toy Fair, on February 20, 2018, in New York. Toys and accessories linked to the movie, which is also making waves for its strong black female leading roles, have the potential to become an enduring presence in stores, like Spider-Man and other iconic figures, company executives say.

An exhibitor organizes 'Black Panther' items at the Hasbro showroom during the annual New York Toy Fair, on February 20, 2018, in New York. Toys and accessories linked to the movie, which is also making waves for its strong black female leading roles, have the potential to become an enduring presence in stores, like Spider-Man and other iconic figures, company executives say.
Listen Now

Marvel’s “Black Panther” film has rocketed past $800 million in worldwide sales in just two weeks, and the superhero smash hit is expected to soon pass $1 billion in sales.

And success on screen can potentially mean plenty of money to be made off screen as well. Hasbro announced it’s making more “Black Panther” toys than it has for any other Marvel character’s first movie. And for $29.95, someone can grab a “Black Panther” tank top and leggings set from Marvel parent company Disney’s online shop.

For a movie like “Black Panther,” which is steeped in black identity and representation, when it comes to merchandise, there’s a risk of coming off as “commodifying” a culture.

“One person’s appropriation is another person’s homage,” said Martin Brochstein, senior vice president at the International Licensing Industry Merchandisers’ Association. “There are very, very few homogenous communities at this point, so I guess there’s always going to be comments on both sides.”

To move a product from the big screen to an item for sale, it often comes down to one thing: licensing.

“At every point during the creation of a product, there are approvals so that the owner of the movie has to approve what’s being done by the licensee,” Brochstein said.

That puts the figurative ball in Disney’s court in determining what is and isn’t appropriate in “Black Panther’s” merchandising.

“Disney is being very careful,” said Jamie Broadnax, founder of the website Black Girl Nerds and co-founder of the Universal Fan con, a diversity-focused fan convention coming up in April. “They have reached out to influencers of color and wanted to get feedback on, ‘Hey, where are we going with this? Do you think this idea for having this costume or this makeup line would be appropriate to market to mass audiences?'”

Disney has faced backlash over marketing decisions recently. It pulled a controversial costume based on the animated film “Moana,” which consisted of a brown zip-up suit with tribal tattoos and leaf skirt. Critics called the costume “brownfacing.” Disney attempted to trademark the phrases “Day of the Dead” and “Dia de los Muertos” ahead of subsidiary Pixar’s “Coco.” The move led to substantial backlash on social media from the Latino community. Disney did not respond to requests for comment.

Currently, the only “Black Panther”-related costume for sale in Disney’s online shop are of the masked titular hero. There are no costumes based on the many female characters whose costumes have gotten plenty of buzz and buzz and buzz. Many of those costumes were based on garments worn by the Maasai and other African and Filipino tribes, including the costumes worn by the Dora Milaje, the elite all-female fighting force featured in the movie.

“I think that it would be absolutely beautiful to see nonblack children and adults dress up as the Dora Milaje,” Broadnax said. “It’s a celebration of a great character who embodies strength, who embodies womanhood in a very significant way.”

But does taking looks from “Black Panther’s” world of Wakanda and selling them raise concerns over cultural appropriation?

“I think it’s hard to even use that from of context because Wakanda, as imagined in the movie, is a syncretic creation, right?” said Evan Narcisse,  a senior writer for Gizmodo’s io9 and author of the upcoming “Rise of the Black Panther” comic series. “It’s something that pulls in aesthetics and influences and practices from all across the continent of Africa. It’s tough to appropriate from an imagined place.”

The film, very much a celebration of black diasporan identity, does come with its own context: colonialism.

“The thing about what we’re seeing now with the possible merchandising is going to have to reflect the context,” Narcisse said. “With the Black Panther, the core of his heroic identity is colonialism and an anti-colonialist response.”

He said consumers have a duty to reflect on that context when wearing or buying “Black Panther” merchandise.

“It’s an opportunity to have that conversation and talk about why Wakanda is special,” Narcisse said. “This is a place where these awful things that happened in real world history didn’t happen.”

Click the audio player above to hear the full chat between Marketplace’s Kimberly Adams, Jamie Broadnax and Evan Narcisse.