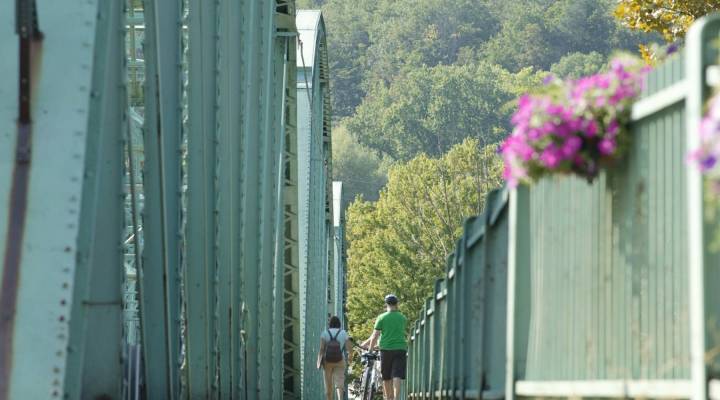 COPY
Cyclists cross a bridge over the Youghiogheny River, veering off the Great Allegheny Passage, to check out downtown West Newton. Courtesy of Rick Armstrong

Cyclists cross a bridge over the Youghiogheny River, veering off the Great Allegheny Passage, to check out downtown West Newton. Courtesy of Rick Armstrong
Listen Now

There’s a national storyline about West Virginia and parts of Pennsylvania, and it goes something like this: As the steel and coal industries fade, small towns are dying out. But for the past twenty years, some entrepreneurs have quietly been working on a different narrative, one that harnesses the natural beauty in these areas to build the economy.

About 10 years ago, after being downsized from a job in computer sales, Rod Darby wanted control of his career. He drew up a business plan for a pub and restaurant in West Newton, a small Pennsylvania town along the still-developing Great Allegheny Passage. The GAP bike trail, as its known, stretches 150 miles, from Pittsburgh to Cumberland, Maryland. Darby shopped his pub idea around.

Then he went to a nonprofit bank, called the Progress Fund. “When he approached and said, ‘I want to do something here,’ we were jumping for joy,” said David Kahley, co-founder of the Progress Fund. It gets its money from private banks, foundations and government sources, and has been investing in recreation and tourism in the region for 20 years. Kahley had been looking for a way to encourage development along the GAP trail when Darby walked in the door.

Today, Darby’s Trailside Restaurant employs 16 people full time, and business is hopping, “And people ask me all the time, ‘Does the trail help you out?’, and I’m like, ‘The trail is the reason I’m here,’” Darby said.

The Progress Fund has made nine loans in West Newton, supporting pizza and fast food restaurants, a canoe and kayak outfitter, and the renovation of a bed and breakfast —totaling nearly $2.5 million. “That kind of level of investment is changing West Newton’s future around tourism,” said Kahley. “Why nine loans here? Well that Great Allegheny Passage is a huge economic opportunity.”

Back on the trail, Kahley points out that the new focus on recreation is a way to diversify the local economy, which was once heavily dependent on coal and steel. “So, it relies on the environmental qualities of the community, rather than being the extractive industry,” he explained.

The Progress Fund estimates that the GAP trail alone has created a benefit of $50 million annually along the route. Economists in nearby West Virginia don’t expect low wage recreation jobs like trail maintenance to replace well-paid coal jobs, but they see great potential for growth, and point to one trail system in southern West Virginia for all terrain vehicles that’s bringing in millions of dollars to the region for permits, lodging, food and fuel.

Kent Spellman works for the national Rails-to-Trails Conservancy in West Virginia, and he sees outdoor recreation as a long-term strategy for the region’s economic development. “And if we get just a small percentage of the people who come through our communities to be thinking down the road about maybe that would be a good place to rear a family, maybe that would be a good place to bring my small business,” Spellman said. “That is the goal of tourism. We should think of it as a recruitment tool, not as an end unto itself.”

Back in West Newton, that’s starting to happen. Young families have been moving in, and there’s a new excitement, as city leaders reinvent their old coal town as a trail town.

This story was produced by the Allegheny Front in conjunction with West Virginia Public Broadcasting.