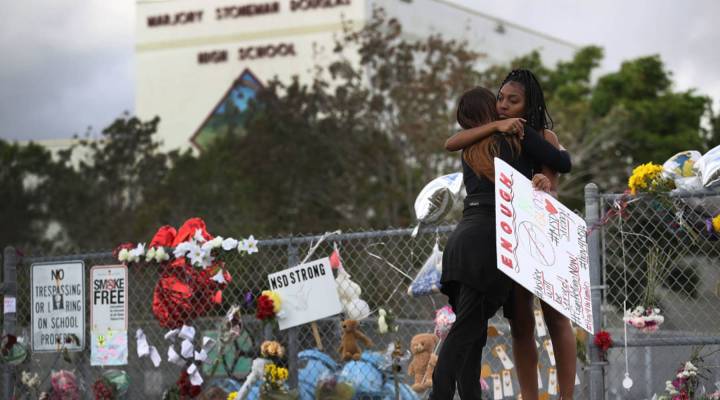 COPY
Tyra Heman (R) a senior at Marjory Stoneman Douglas High School, is hugged by Rachael Buto in front of the school where 17 people that were killed during a mass shooting in Parkland, Florida. Joe Raedle/Getty Images

Tyra Heman (R) a senior at Marjory Stoneman Douglas High School, is hugged by Rachael Buto in front of the school where 17 people that were killed during a mass shooting in Parkland, Florida. Joe Raedle/Getty Images
Listen Now

The National Rifle Association has backed President Trump’s call to arm teachers in the wake of the Florida and other deadly school shootings.

Trump advocated arming school officials, only “if they really have the aptitude.” But would this actually help people in the midst of a crisis?

Amanda Ripley, an investigative journalist and the author of “The Unthinkable: Who Survives When Disaster Strikes — and Why,” joined us to explain why this would be incredibly risky.

Amanda Ripley: Well, it’s certainly comforting to imagine that armed teachers or guards will reduce the risk of school shootings. We all want that. In reality, people who have engaged shooters in real life will tell you that it is extremely different than we expect it to be. In real life, we lose basic motor skills that we take for granted every day. You need to have extensive realistic training in order to pull this off without hurting anyone else.

David Brancaccio: And in terms of implementation of this kind of policy, what you’ve said is very relevant, because people need a commitment of time to acquiring and practicing the skills that, God forbid, would come into play.

Ripley: Right. So one officer told me about, you know, he was knocking on the door of an apartment building to arrest a shoplifter, and the guy out the door starts firing on him just without warning — which is similar to a school shooting, right? You don’t have any warning. And the officer turned — and he was very well-trained — he starts running for his life down the hallway. Suddenly fell flat on his face. You know, he just wiped out. There’s nothing that he tripped on. Your motor skills deteriorate very quickly when you’re very frightened. He finally gets to a turn in the hallway, takes cover, goes to shoot and he sees his empty hand pointing out in front of him. So he had dropped his gun. It wasn’t in his holster. It wasn’t in his hand. He dropped it in the hallway. And again, this is a well-trained officer. So we have to have a conversation about the potential benefit that we might get from arming teachers — which is extremely low and there’s not a lot of evidence for it — and the significant risk that kids take on particularly when you bring an armed police officer into a school.

Brancaccio: In other words, you’re [saying] if a significant shift in policy is being contemplated to bring some data to the table.

Ripley: Right. And the data so far does not show that having more weapons in schools makes kids safer. What we find though, starting with Columbine, including the Kentucky school shooting last month and the Florida school shooting last week, there were armed, trained police officers stationed at those schools. Those shooters still came knowing that. So this theory that many have repeated, including the president, that shooters intentionally go to gun-free school zones — there is no evidence that that’s true.