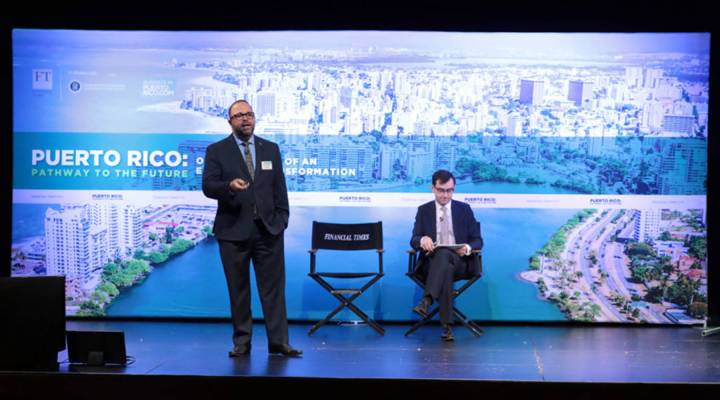 Researchers from George Washington University announced Thursday they will be conducting a recount of Hurricane Maria’s death toll amidst conflicting accounts that have emerged since the hurricane hit, rekindling conversation about recovery efforts on the island. Beyond the challenges of physical reconstruction, Puerto Rico is also facing a debt crisis. In a five-year fiscal plan released in late January, the Puerto Rican government announced that in the next year, it is estimating an 11 percent drop in its economy and a population drop of about 8 percent. In order to bolster its economic status, the governor and several members of his administration have been in New York and Washington, D.C., to try to bring some investment to the island.

Marketplace Weekend’s Lizzie O’Leary spoke with Manuel Laboy, Puerto Rico’s secretary of the Department of Economic Development and Commerce, to expand more on the investment efforts. Below is an edited transcript of their conversation.

Lizzie O’Leary: What’s your pitch to investors? How do you say, “Take a chance on our economy,” particularly when you are dealing with both a hurricane and this very large outstanding debt burden, which is, you know, being litigated?

Manuel Laboy: When it comes down to the debt restructuring, the truth of the matter is that last year, we filed for Title III under Promesa. And we were concerned —

O’Leary: The law that essentially allows you to declare bankruptcy.

O’Leary: Well, some people thought that was going to create sort of uncertainty. But on the contrary, the fact that now we have an orderly process, that in itself provides certainty. The actual fiscal plan includes what we call structural reforms. Those are going to be the basis for our future growth. No matter whether we believe that tourism has to be forefront or manufacturing or technology or whatever, it is essential to have a strong foundation.

Laboy: Well, that is a very sensitive matter, right? The Promesa law states that we need to achieve a sustainable adequate pension plan and that is part of the discussion that we need to have. We need to make sure that we can honor previous commitments. And at the same time, we need to be fiscally responsible. And that is going to require, you know, certain negotiations and certain things. I cannot jump into a conclusion that it will be essentially a cut. But changes need to be made. Now the nature of those changes are part of the things that we need to figure, and we are in the process of doing that. Certain things were included in the fiscal plan, but it is an ongoing process, and we need to make sure that it’s fair system, that is fair for previous people, and of course upcoming governmental employees that need to receive a fair treatment, so we need to balance all this interest.

O’Leary: There are some things in this plan, and I want to kind of walk through them because they’re key tax issues. For example, 100 percent exemption from income taxes on all dividends, interest and capital gains for bona fide residents on income made in Puerto Rico. It sounds to me, looking at some of these changes, you all are trying to create a tax haven or tax breaks for people to come to the island. Is that right?

Laboy: I understand why some people might think that, but it’s not really the reality of it.

Laboy: A tax haven, by definition, is that, you know, you are avoiding taxes. And by the virtue of that, it doesn’t translate into economic activity or economic development or the creation of jobs or so forth. In the case of Puerto Rico, we are using certain tools like tax sanctions or tax credits or other economic incentives to really actually incentivize — because that’s precisely, you know, the whole point — incentivize a number of activities that are supplementary to the decision of going to Puerto Rico based on other factors — our core competencies and assets that we have in the island. I’ll give you an example: In the case of Act 22, which is the one that offers a zero percent for all passive income and distributions, it is based on the fact that it’s completely new money. So an individual with a high net worth probably will not consider Puerto Rico to become a residence for many reasons, you know. And so it is like, you come to Puerto Rico, otherwise you will not have made that decision and you will need to invest, because in order to receive that benefit you need to invest.

O’Leary: You know, you and I are talking about these big-picture plans for revitalization and an economic overhaul. And yet I wonder, how do you do that when basic things like electricity are still so unreliable?

Laboy: Yeah, that’s another great observation. Before the hurricane we were struggling a little bit, not only because the cost of energy was high but most recently there was uncertainty in terms of the reliability. Actually, there was a power outage back in 2006 that reflected the vulnerability of the system. Maria provided a silver-lining blessing, if you want to call it, because it really exposed how fragile the system was. It actually collapsed, completely, 100 percent. So I don’t want to sound disrespectful, but you know for five months after the hurricane to be at 80 percent power is really remarkable. You know, it’s remarkable because it was zero. It was nothing. You know, it really collapsed. Now there’s another 20 percent of the population that doesn’t have power. And we’re doing everything we can to expedite the process. And for me, it is unacceptable that some people don’t have power.

Laboy: We’re talking to everybody, basically. Both U.S. investors and non-U.S. investors. Certainly U.S. investors, because we are part of the U.S. It’s our natural pitch, and it has been like this for many years. But on, you know, on the other hand, as any other state or territory does, we want to diversify the source of funding from private investors. Right now, I’ll give you an example. We have companies from Germany in the aerospace industry like Lufthansa. We have three, four maybe five companies, huge companies in the island, in the manufacturing sector, medical devices and pharmaceutical. We have investors from Mexico. They are in the telecommunications sector. They are in the pharmaceutical sector. They are in the concrete business. We have investments from Colombia. We have investments from Spain. I mean, we are highly diversified, but of course our main source of funding has always being the U.S. mainland-based investors. But the pitch right now is basically to U.S. investors … because we want to leverage what’s happening on the federal front with the private-sector front.