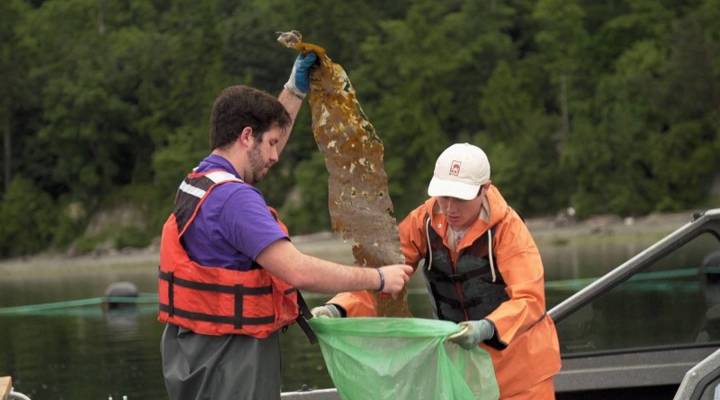 The tide flat on Hood Canal is only exposed for a few hours a day, so tide is money at Baywater Shellfish farm west of Seattle.

“Here’s a good looking oyster for you. Nice deep cup. Hopefully this will be sitting on a platter in a restaurant ASAP,” said Baywater manager Caleb Davis as he flips and sorts through bags of shellfish.

Caleb’s father, Joth Davis, founded Baywater back in the ’90s. They farm clams, geoduck and oysters. His business is part of the Pacific Northwest’s $200 million shellfish industry.

But this industry is in trouble.

That’s because the ocean’s chemistry is changing. The ocean absorbs more than a quarter of the carbon dioxide we pump into the air. And all that carbon is making seawater more acidic and making it more and more difficult for oysters to grow.

But what if there was a way to pull some of that carbon out of the water?

Brian Allen is up to his elbows in the cold black waters of Hood Canal. The Puget Sound Restoration Fund researcher is hanging over the side of a small boat, trying to pull in a tangle of ropes.

Below the surface, there’s an unseen garden of yellow kelp growing on 60-foot lines. Allen untangles one and hooks it onto a winch. He starts cranking the kelp to the surface, marveling at the “plant” he pulls in.

“I use the term plant loosely. They are not plants. They’re protists related to slime molds and amoebas,” Allen said.

But like trees and bushes, kelp makes energy through photosynthesis: carbon dioxide in, oxygen out. And that’s why this project could be important in combating ocean acidification.

Allen’s colleague Betsy Peabody helped organize this study to see just how much carbon the kelp can sequester.

“You could create, in theory, a kind of seaweed filter, you know, curtain, around where you’re growing shellfish,” Peabody said, “so that as water is circulating through that system, seaweed is pulling CO2 out of that water.”

A Baywater Shellfish employee works in the geoduck patch.

Baywater Shellfish’s Joth Davis is working with the scientists on the kelp project. He sees a dual economic potential in growing kelp and oysters together.

“I’m looking at interspersing shellfish in baskets, hanging below buoys. And then every other line would be kelp. Between the two of them, we’ll be able to harvest both kelp for food and shellfish,” Davis said.

The project is now entering its second year. Davis said the plan is to move beyond the science and try harvesting the kelp in late spring.

Even though harnessing the carbon-sucking power of kelp and other aquatic plants, like seagrass, is showing promise for the shellfish industry, there’s only so much the plants can do. And Davis said ocean conditions are going to get worse as we continue pumping carbon into the atmosphere.

And it won’t just be the shellfish industry that suffers. These changes in ocean chemistry could soon become a problem for crabs, shrimp and even salmon.

A version of this story ran on Oregon Public Broadcasting’s Earthfix.