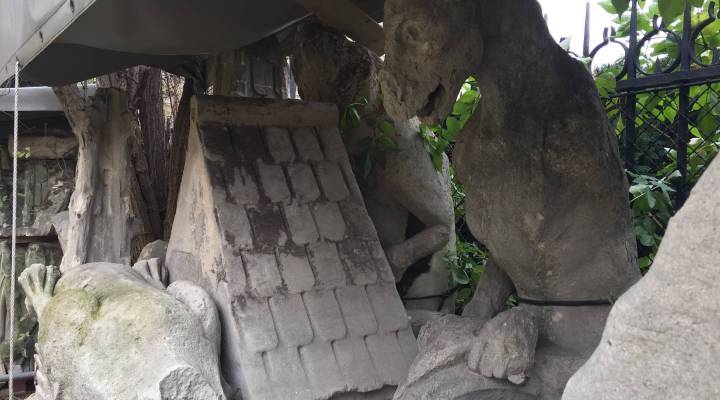 Paris’s Notre Dame Cathedral is in a dismal state of disrepair and needs $70 million for urgent renovations, according to Michel Picaud, head of Friends of Notre Dame de Paris. One possible solution for the famous church and other religious monuments is to ask patrons to pay an entrance fee, but so far the Church has been against that.

Taking a tour of the decrepit parts of the cathedral (its construction began in the 1100s), is a long, breathtaking and dispiriting experience. Around the back of the cathedral, Picaud points to a collection of stones – including finely worked pinnacles and gargoyles — that have been piled up in a long stack.

“These are all from the cathedral,” he said. “Either they fell down or they were taken off the cathedral because there was a big risk that they would fall.”

He says water is seeping through the roof, threatening the beams that hold it up. And where there should be gargoyles, there are often bits of plastic piping sticking out instead. Some of the flying buttresses, the supporting structures that are a distinctive feature of the Gothic period cathedral, are near collapse.

In France, the government owns all historic churches and is responsible for their upkeep. Picaud hopes to supplement insufficient government funds with private sponsorship, in the form of donations. But others, like Edouard de Lamaze, say some churches should charge an entrance fee. He is president of the Religious Heritage Observatory, which has a mission to save France’s close to 120,000 historic churches and other religious buildings.

Back at Notre Dame, some of the 13 million people that visit this cathedral each year are lined up to get in. The Conference of French Bishops has rejected the idea of making them pay, saying it doesn’t want money to come between people and God.