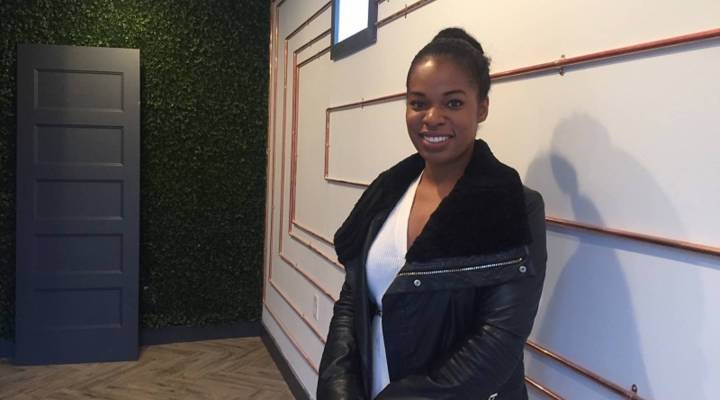 COPY
Labriah Lee Holt stands inside her blow-dry salon, which she plans to open in May. She'd like to see more support for women entrepreneurs of color. Elly Yu

Labriah Lee Holt stands inside her blow-dry salon, which she plans to open in May. She'd like to see more support for women entrepreneurs of color. Elly Yu
Listen Now

This week, hundreds of African-American women will meet in Atlanta for Power Rising, a conference to talk about ways to make their voices better heard in politics, economics and other areas.

Black women own about 1.5 million businesses in the country, according to the latest U.S. Census figures, generating more than $42 billion in sales in 2012. Conference organizers say they want black women to find ways to make the most of their political and economic power.

Atlanta resident Labriah Lee Holt will be attending and speaking at the conference as a new entrepreneur. She bought a building last year in Atlanta’s west side so she could open up a blow-dry bar specifically for women of color.

“As an African-American woman or a woman with textured hair, you don’t always have trust,” Holt said. “I can’t just walk into any storefront and say ‘Can you blow out my hair?’ or ‘Give me a hairstyle,’ because they may not be familiar,” Holt said.

To Holt, opening up a business geared toward other black women was more than just about stylists being familiar with black hair. The former lawyer said when she was researching the market for her business, she didn’t see a lot of black women ownership represented in big salon chains.

“It just shows how so much money is spent on this stuff by our community and by women, and none of that money is really going back to our community,” Holt said.

Holt will join other black women at the conference to talk about these issues, including business and the economy, politics, health, education and culture.

“We’re looking to come out of the conference at the end with an action plan with some things that we can agree that we will do in the coming weeks, the coming months, to move forward our communities and our nation,” said Leah Daughtry, a Washington, D.C., area pastor and co-organizer of the conference.

Daughtry, who was CEO of the 2016 Democratic National Convention, said the idea for a conference of black women came from a Congressional Black Caucus women’s retreat after the presidential election.

She said black women have consistently demonstrated the power of their vote, but that hasn’t always translated to being represented in politics.

“But beyond that, our consumerism, the amount of money that we control in the American economy, the influence that we have on culture and on business — we are not represented in corporate boardrooms in the way that we should be,” she said.

According to the University of Georgia’s Selig Center for Economic Growth, African-American buying power will reach $1.5 trillion by 2021, up from $1.2 trillion in 2016. And a recent Nielsen report shows that black women are a big part of that growth.

Black women are also one of the fastest-growing groups of entrepreneurs in the country, according to the National Women’s Business Council. Kimberly Blackwell, a member of the council, said despite that, there are disparities.

“Black women business owners continue to have annual receipts that are much less than the broader populations,” she said. “So a still a lot of work to be done there.”

She said black women business owners can face particular challenges, like getting access to capital or finding a network of mentors.

One of Lee Holt’s challenges has been juggling a full-time job while trying to get her business off the ground. She’s been using her own money along with a small business loan.

“I would love to see if there’s a way to create more support for black women who may be talented and have brilliant ideas who are just missing funding or potential access to potential funding revenue streams,” she said.

Her salon, Sweetroots, is expected to hold its grand opening in May.