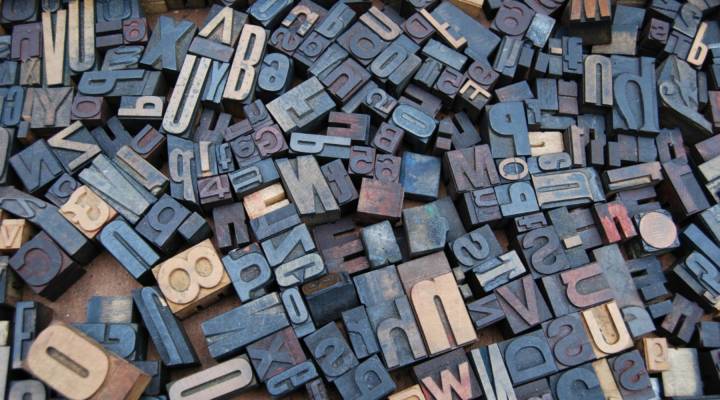 Many™ of™ the™ words™ you™ say™ are™ probably™ trademarked.™

And this is causing a lot of problems for people who are trying to start businesses.

In a new paper from the Harvard Law Review called “Are We Running Out of Trademarks?” NYU law professors Barton Beebe and Jeanne Fromer analyzed millions of trademark applications filed at the U.S. Patent and Trademark Office and found that it is becoming increasingly harder to find good names for our companies.

“If I were to tell you that our economic system has reached a level of development where we’re running out of words, you’d think I’m nuts,” Beebe said. “There have been lots of media reports over the past decades about how all the good band names are taken, all the good craft beer names are taken. And we wanted to actually … back it up with data, and that’s what this article does.”

Along with this data, the paper also found the characteristics of a strong trademark. Beebe joined us to discuss some of the factors you should consider when naming your company.

1) Be careful about using your last name

Connecting your company with a core part of your identity might be good for marketing, but problems could arise if you decide to sell your business.

“Then you’re stuck with your surname out there being used by someone else,” Beebe said. “If you want to start a new company, you’ve lost control of your surname.”

Take a look at the legal wrangling that happened over the fashion brand Paul Frank, a company that requested an injunction to block its namesake owner — Paul Frank Sunich — from doing business under the name after he had left in 2005. (The judge threw out the injunction, but “cautioned Frank not to start a similar company using a similar name,” Vanity Fair reported.)

Of course, there are examples where it has worked out, like with Dell Inc., which was named after its founder and CEO, Michael S. Dell.

“But I think marketing experts would say it depends on the situation and be wary of using your surname unless there’s a really good reason to do it,” Beebe noted.

Google is a classic example of that.

“So-called ‘copycat’ brand names that pattern themselves after leading brands in their fields are generally thought to be ineffective,” according to the study.

3) … but there are times when “common” words are effective

As you can see with Google’s tech competitor Apple.

And people love common words. Beebe and Fromer’s study looked at the 100,000 most frequently used words in English and found that 75 percent of words we use on a daily basis are claimed as trademarks.

Around 10 different registrants have claimed the word “the.”

“Some of those might be acronyms, but that means the word is claimed,” Beebe said. “And if you want to walk in and register ‘the,’ you’re out of luck.”

Keep the naming short  and easy to pronounce — aim for around seven letters, Beebe said. But that’s getting harder because of all of the trademarks that are already out there.

“Everything is so claimed that registered marks are getting longer — more syllables,” Beebe noted. “Surname usage is actually declining.”

More than half of the U.S. population has a surname that’s been claimed as a single-word trademark, and about 80 percent of the syllables that you use on a daily basis are claimed as single-word marks.

“Essentially, for a lot of us, you’ve just been born too late to claim your name as the name of your business,” he added. (If you want to name your company after yourself, see No. 1).

It’s not clear what we can do to improve the trademarking process, but there are some rule adjustments happening at the Patent and Trademark Office. It’s trying to clear marks that are registered but not still used in commerce, Beebe said.

But making it harder to register a trademark could pose difficulties for small businesses.

“The concern here though is that in trying to solve this problem, we end up putting a lot more pressure on small businesses who don’t have the sophisticated legal help to help them register their mark,” he added.

5) Go ahead and make up a word

Coined words will be more effective if they conjure words that are “positively charged” or are “brand-appropriate words more familiar to the consumer,” the report said.

The study cites Verizon, which calls to mind “horizon.”

And, conversely, you don’t want the brand name to invoke any negatively charged words.

Ford’s failed Edsel automobile “invoked ‘weasel’ and ‘pretzel’ in association tests,” according to the report.