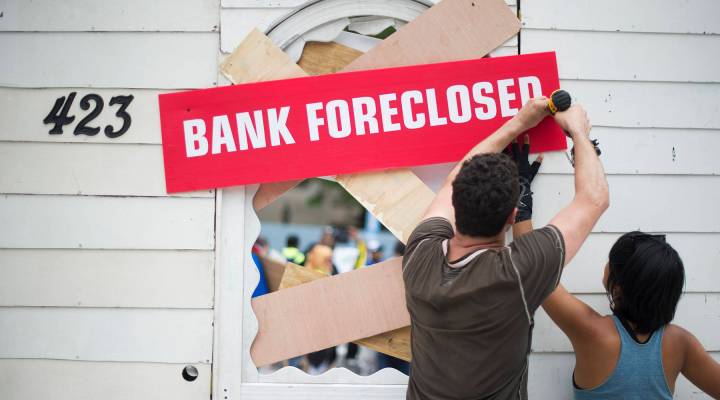 Protesters work on a prop in Freedom Plaza as they prepare for a rally against big banks and home foreclosures in Washington, DC, May 20, 2013.  JIM WATSON/AFP/Getty Images
Divided Decade

Protesters work on a prop in Freedom Plaza as they prepare for a rally against big banks and home foreclosures in Washington, DC, May 20, 2013.  JIM WATSON/AFP/Getty Images

As of Dec. 31, Americans are $13.15 trillion in debt. That’s $193 billion more than the quarter before, according to the latest data released by the Federal Reserve Bank of New York. Most of that increase — about $139 billion — has been in mortgage debt. Americans owe a total of $8.88 trillion in mortgages loans.

That’s a good thing, according to Joelle Scally, the administrator of the Center for Microeconomic Data at the New York Fed. Household debt has been growing for five years but mortgage balance growth has been slow since it stopped declining in 2013. The recent jump in mortgage debt is a proof of recovery in the housing market.

“The housing market has turned around nationally and that’s what we see reflected in the change in mortgage balances,” Scally said.

One of the reasons why mortgage growth has been slow is that “mortgage underwriting has been very tight,” according to Scally. Compare that to the auto market where loan balances have been growing since 2011 — thanks to both subprime and prime borrowers.

“Subprime auto loans had been growing and had been a large share of the newly originated auto loans,” Scally explained. “Plus favorable interest rates made auto loans more attractive to the prime borrowers, who may have historically not taken out a loan to purchase a new car.”

In the last quarter, auto loans increased by $8 billion — making up $1.22 trillion of U.S. household debt. Credit card debt went up by $26 billion while student loans are up by $21 billion.

Mortgage balances have yet to reach their 2008 peak — they are currently 4.4 percent below that. And according to Scally, the data varies widely from state to state.

“Some states have actually passed their earlier peak and are increasing fairly rapidly where other states remain below the peak that they had seen in third quarter of 2008,” Scally said. “States that have benefited from an oil boom — North and South Dakota, Texas —  have balances that are more than 10 percent higher than their previous peak. The key states that haven’t passed their previous peak and still are over 10 percent below are in many cases the ones that were the most strongly impacted by the Great Recession and that had a big boom-bust cycles in the housing market — so California, Florida, Nevada, Arizona.”

“In the case of California, the lower mortgage balance means that individual homeowners may have more home equity in their homes,” Scally explained.