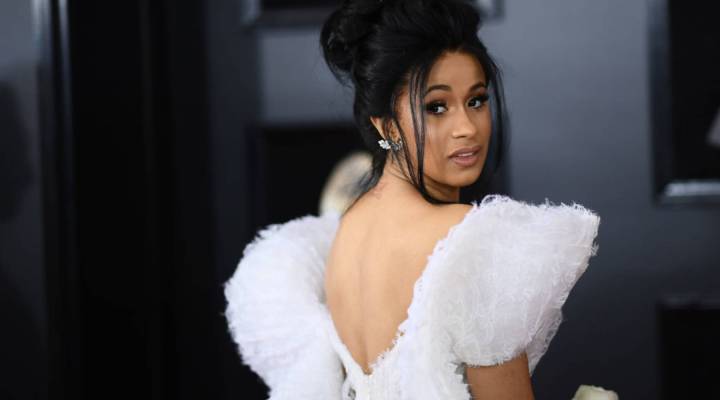 COPY
Cardi B arrives for the 60th Grammy Awards on Jan. 28, 2018, in New York. In 2017, the Bronx-born rapper became the first solo female rapper to reach the number one spot on the Billboard Hot 100 since 1998. Her success relied heavily on fans streaming her song "Bodak Yellow." (JEWEL SAMAD/AFP/Getty Images)

Cardi B arrives for the 60th Grammy Awards on Jan. 28, 2018, in New York. In 2017, the Bronx-born rapper became the first solo female rapper to reach the number one spot on the Billboard Hot 100 since 1998. Her success relied heavily on fans streaming her song "Bodak Yellow." (JEWEL SAMAD/AFP/Getty Images)
Listen Now

Whether or not a song is a hit will soon depend more heavily on where people listen to it.

Billboard has announced  that plays on paid streaming platforms will get more weight in their Hot 100 ranking, than plays on free platforms. It’s a small change that holds immense impact for the future of pop music and record companies’ promotion strategies, as the music industry grapples with an increasingly digital future.

People with Apple Music or Tidal accounts will have a larger hand in determining American’s music taste, than people who stream music for free, on platforms like YouTube or SoundCloud. But here’s the thing — Apple Music has 30 million paid users. Spotify has 70 million subscribers. Yet, 1.3 billion users stream music on Youtube. Each month.

And that will have a big impact for artists.

“You may have had two to three million plays of your song, but now it counts less on the Hot 100?,” said Gary Suarez, a music critic and writer. “The whole point of the Hot charts was to reflect what people were listening to, not necessarily what was making record companies money.”

Yet this change is only the latest in a long history of the music industry tweaking their formula for what’s popular — and record companies changing their strategies accordingly.

Casa Amadeo in the Bronx is the oldest Latin music store in New York City. Since 1941, it’s been a go to for music. Today, guitar strings and bongos keep the place afloat.

For the past 49 years, Mike Amadeo has run the store six days a week, nine hours a day.

Up until the mid ’90s, he used to get a phone call or an envelope in the mail every month from Billboard with a list of new music. He had to respond with what was selling.

“Yeah, what’s the hit, what’s the record that’s selling the most,” Amadeo said. “I used to write it, seal it, put a stamp on it and send it to them.”

Billboard would process information from across the country and put together their charts. It was their paper and pencil way of tallying up what’s popular. But like any system — it could be gamed.

Amadeo points to a framed poster of Selena, one of the highest selling Latin artists of all time, sent from her record company. It’s signed. He says that was kind of a wink and nudge.

“If you read what it says there it’s ridiculous, you know. ‘Send me kisses, gracias por la apoyo,’” Amadeo said. “Blessing me because I’m such a nice guy. I never did anything for her!”

It was common. Company sends gift, clerk marks down an album as selling higher than it actually did — and before long, they’ve got a hit on their hands.

Amadeo says he never caved because he is part of the music industry himself. He’s written nearly 300 songs for famous Latin artists, including Tito Nieves, Celia Cruz, Danny Rivera and Cheíto González.

By the 2000s technology changed how we listen to music. And that meant the charts changed too.

In 2013 Billboard brought in a new formula to determine what’s popular. It looked at sales, radio play and, for the first time, streaming — on places like Spotify, YouTube and SoundCloud.

“It was a little crazy,” Suarez said. “I think for a lot of people they were still dubious about what streaming was going to mean.”

But streaming was here to stay. And all of a sudden — a real time reflection of people’s tastes — especially youth. Eighty five percent of 13 to 15 year olds stream music regularly. And for the first time, hip-hop stormed the charts.

“Hip-hop is now the most consumed genre in the country. Period,” Suarez said. “It is also the predominant genre grouping on streaming platforms.”

In 2017, seven of the 12 songs that held the number one spot on the Billboard Hot 100 were hip-hop and R&B songs. Songs from Post Malone, Cardi B, DJ Khaled, Kendrick Lamar, Migos, Rae Sremmurd and The Weeknd.

And it’s here that YouTube really comes into play. Almost half — about 46 percent — of all time spent streaming music happens on YouTube.

And artists’ record labels use this to their advantage.

“One of the best examples I would say is Post Malone’s ‘Rockstar,” Suarez said. “What they did was they created a YouTube video and it was only the song’s chorus, but the length of the video, was precisely the length of the actual song.”

That video, posted by Post Malone’s record label, had a link in the description to streaming platforms with the full track. But since the chorus loop was close enough in likeness to the actual song — plays in both places counted.

Basically, two streams for the price of one.

“This is our way of fudging the numbers,” Suarez said. “It’s become the new promotion strategy to instruct your fans where to listen to music.”

Record labels and artists adapt. For instance, rapper Cardi B’s fans urged people to stream her song “Bodak Yellow” on repeat to get her into Billboard’s number one spot. And it worked.

But now Billboard is changing its rules again and record labels are already adjusting.

Billboard wouldn’t talk to us about the changes, but they sent a press release. It says plays from users on paid platforms — so from Apple Music users or Spotify subscribers — will get more weight than plays from people using free services, like YouTube.

“Today there are many ways to consume and not all are created equal … from a revenue perspective,” Billboard staff write.

It’s a sentiment shared across the music industry.

“If I’m not really paying anything for it, am I listening to things that I really maybe don’t care about as much or are lower down in the value chain?” said Jim Lidestri, CEO of Border City Media.

Border City Media makes Buzz Angle Music, a different method to track music consumption. They too give more weight to streamers who pay.

A quick look at the past five years, and it’s impossible to deny the cultural sway free streams have had.

Streaming has boosted more Spanish language and rap songs onto the charts than ever. “SoundCloud rap” has become synonymous with a subculture of rappers with colored dreads and melodies inspired by 2000s emo and pop punk — and pushed these ideas into the mainstream and onto Billboard’s charts.

But now Billboard’s formula will change.

“Whitewashing is a definite concern with this,” Suarez said. “If we look back a year from now at those charts and see, you know, there are fewer hip hop songs that made it on there, then that’s going to raise some questions about whether or not this was such a good idea.”