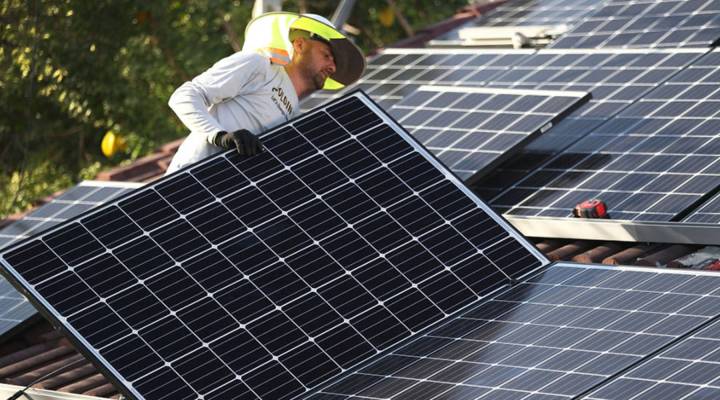 COPY
Andres Hernandez, from the Goldin Solar company, installs a solar panel system on the roof of a home a day after the Trump administration announced it will impose duties of as much as 30 percent on solar equipment made abroad on January 23, 2018 in Palmetto Bay, Florida. Joe Raedle/Getty Images

Andres Hernandez, from the Goldin Solar company, installs a solar panel system on the roof of a home a day after the Trump administration announced it will impose duties of as much as 30 percent on solar equipment made abroad on January 23, 2018 in Palmetto Bay, Florida. Joe Raedle/Getty Images
Listen Now

Last year when President Donald Trump bowed out of the Paris climate accord, he famously said he was elected to represent the people of Pittsburgh, not Paris. But Pittsburgh’s Mayor Bill Peduto wasn’t having any of that. He created an all-encompassing plan to cut greenhouse gas emissions in half by 2030, ramping up plans to plant more trees and  bulk up on solar energy.

But there are concerns that poor, black communities in Pittsburgh will be left behind as the city greens itself up. Communities that are home to people like 87-year-old Barbara Williams, where many of the houses are old, drafty and no match for the city’s freezing weather. Even after installing a new furnace and additional insulation, some rooms in William’s house are still so cold she avoids them altogether. And things used to be even worse, said her daughter Brenda Payne.

“I remember a few times seeing $300 gas bills if not higher for a month and the house would still be freezing cold,” Payne said.

Derek Morris with Pittsburgh’s Habitat for Humanity gets thousands of calls from people like Williams. All over the country, lower-income families spend more on utilities than families with higher incomes. In Pittsburgh, with its older housing stock, they spend about three times more.

“Low-income families can’t afford to do these type of projects to make their homes more efficient. It’s just it’s outside of their realm,” he said.

People who earn less also can end up paying the price for those people who can afford to make their homes and businesses more energy efficient. As more city residents and businesses produce their own energy, they pay less into traditional systems. And that shifts a bigger burden per person to those left behind. Hawaii saw this happen in 2015, when solar took off among the more affluent residents, leaving residents with less means facing bigger bills.

“The costs to that group began to rise in terms of having to pay for their electricity consumption because it needed to be spread out over fewer customers,” said Gregory Reed, who runs the University of Pittsburgh’s Center for Energy.

The Center for Energy is working with the city and utility companies to build microgrids, independent power grids that run without electricity from a larger station. He said they keep energy concentrated and spread the greening-up benefits equitably.

“Whether it’s someone living in older 130-year-old house that may need some repair, or whether it’s one of the nicest, newest highly efficient skyscrapers,” he said.

Knowledge Murphy, a solar panel salesman, has heard these promises before, especially as Pittsburgh’s economy has been transformed by the health care industry and companies like Uber and Google.

“There has not been any detailed mention of how exactly communities of color who’ve been left behind in Pittsburgh’s tech boom and this reinvention of Pittsburgh are going to be included,” he said.

Murphy, who’s black, says there aren’t many people in his field who look like him. And most of his clients don’t either. Take Barbara Williams. Her daughter Brenda Payne said they wanted solar panels but couldn’t afford them at thousands of dollars. As for all those city initiatives to bring cheaper, greener energy to poorer communities?

“We’re the last one where the streets get done. The last one for any kind of you know beautifying, we’re always last,” she said.

And she expects that will be the case, here, too.