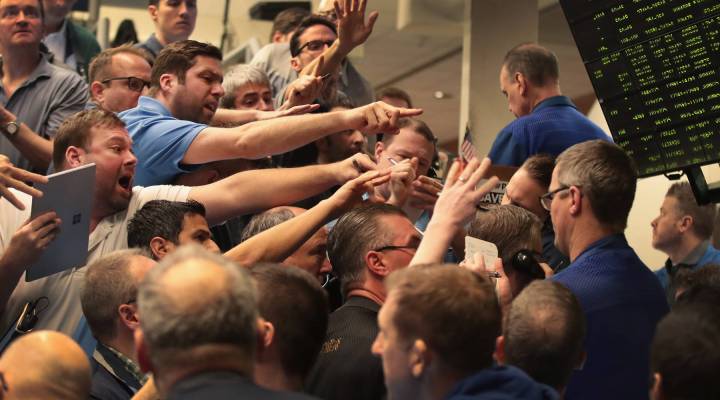 Look at a chart of the Standard & Poor’s 500 index today: It’s like a mountain range in Mordor — jagged movements, all up and down. Today, the Dow Jones industrial average fell more than 560 points at the open before rebounding more than 900 point in less than a half hour. There were swings of several hundred points over the course of the next couple of hours. And, of course, the Dow closed up 2.33 percent. This is what we would call a very volatile day in the market.

But let’s put this in context. Marketplace correspondent Sabri Ben-Achor talked to host Kai Ryssdal about the big picture behind volatility:

But isn’t this normal? Isn’t this what the market is supposed to do?

Movements, even big movements, are normal. Between 1900 and 2016 we got, on average, a decline of 5 percent or more about three times a year. Now, those declines would take on average a month and a half.  The declines we saw on Friday and yesterday and the gains we saw today happened much more quickly. One reason things moved so quickly is the automation of trading — it’s much more fast and furious because robots are basically doing it.

Markets have been calm for a while now. Are we entering a period where they’re just going to be moving around more?

Well the economists I’ve talked to have said “yes, probably we are,” but we need to put this in a bigger context. Over the past 30 years, volatility in the markets has actually been falling. George Pearkes is with the Bespoke Investment Group. He says markets have become much more efficient, much cheaper to buy and sell in, and automated, so in general this has smoothed markets out over the long term.

So what you see over the past five years is periods of prolonged calm and then sudden, very sharp, very short spikes higher in volatility, so overall volatility is lower but when volatility does ramp up, it feels much more drastic because we go through these prolonged periods where not much happens and stocks just gently tick up every day.

So that’s why the past few days have been so jarring, because we got used to basically nothing happening.

But what’s changed? I mean why are we entering a period of higher volatility now?

Because basically there’s more to be volatile about right now, that’s how Kyle Woodley explained it to me. He’s senior investing editor at Kiplinger.com.

We’ve had a prolonged period of a Goldilocks economic situation. The economy has been good, unemployment low, so there wasn’t any volatility because there was no reason for it.

Now, we have things to think about. Inflation, maybe. Higher interest rates than previously thought, probably. More government debt, definitely. So as the macro-economy becomes more unpredictable — not bad but just more unpredictable — so too are the markets that are built on its foundation.

Is that bad? Is more volatility necessarily a bad thing?

No, not necessarily. Volatility is where traders make money— it means people are buying and selling. It just looks scary. Here’s some advice from T. Rowe Price’s global head of equity trading, Clive Williams, who was super calm when I talked to him:

There’s nothing I would change or I am changing personally because we’re seeing more volatility in the markets.

He said if you have a 401(k), long-term investments, just stick with it, keep contributing, hang in there. We may have some more days where things happen now and again, don’t freak out.